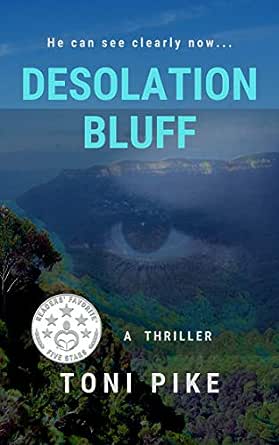 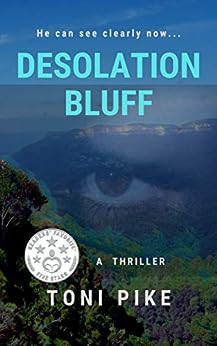 Blind romance author Oliver Cameron uses the pen name of Fidel Amore and thinks he has the perfect life at his country estate near Desolation Bluff. After a honeymoon in Paris, his wife Vanessa continues her work as his assistant. His friend Ray is the business manager who lives in the gatehouse and also acts as the public face of Fidel Amore, doing all those book-signing trips that Oliver never wanted to attend. Helen Dunkley is the housekeeper devoted to him since childhood – but she detests the two newcomers.

Complications set in when Ray, working on his old car, accidentally backs into Oliver. His injuries appear minor but the next day he suddenly regains his sight. Oliver wants Ray and Vanessa to be the first to hear his good news, but when he finds them he uncovers a shocking betrayal.

A game of cat and mouse begins – and with the arrival of a mysterious stranger, it turns deadly.

A short suspense novel that will keep you guessing right to the very end.

By the author of:
Dead Dry Heart – a psychological thriller
The Jotham Fletcher Mystery Thriller Series – “A non-stop thrill ride!”
Book 1: THE MAGUS COVENANT – The secret that will change the world
Book 2: THE ROCK OF MAGUS – Code Red in the Vatican
Book 3: THE MAGUS EPIPHANY – Ancient treasures and a new revelation
Book 4: HOLY SPEAR OF MAGUS – The covenant will be fulfilled

Uma Iyer Van Roosenbeek
5,0 van 5 sterren A delightful, thrilling hair-raising adventure!
2 mei 2019 - Gepubliceerd op Amazon.com
The extremely popular blind romance writer Fidel Amore who in real life is Oliver Cameron has just returned from an exciting, romantic honeymoon in Paris with his writing assistant wife Vanessa. He has an arrangement with Ray who poses as the writer and attends all the obligatory events that a writer is expected to attend!

When a freak accident restores his vision, he keeps it a secret and discovers the direction in which his life has been taken over by his wife and his friend! At this juncture, an unexpected long distance relative enters Oliver's life.

How Oliver gradually takes over his own life forms the content of this beautifully conceived book that sets an exciting pace and keeps the reader glued to the book until the last page is read!

Thanks to the author Toni Pike for an ARC of this book which made for a thoroughly enjoyable reading experience.

Terri A Webster Schrandt
5,0 van 5 sterren Bluff is the Operative Word
3 mei 2019 - Gepubliceerd op Amazon.com
Bluff is the operative word in this new thriller by Toni Pike. This short novella is quickly engaging and a page-flipper as Pike weaves this suspenseful tale of betrayal set in the Southern Highlands region of Australia.

Romance author Oliver Cameron is blind from childhood, but an accident restores his sight unbeknownst to his housekeeper, new wife, and literary partner. The minute Oliver “sees” the treachery of his partner and his own wife, he engineers a subtle cat and mouse game of revenge that will stun you to the end and leave you well-satisfied.

Pike is fast becoming a master in the suspense fiction genre and Desolation Bluff is a great addition to her growing collection of books.

I received an ARC at no cost from the author and this is my honest review.

DGKaye
5,0 van 5 sterren Loving the plot twist!
1 juli 2019 - Gepubliceerd op Amazon.com
Desolation Bluff was a pleasure to read. Blind writer, Oliver, who writes under the pen name of Fidel Amore, is a workaholic who has his newlywed wife, Vanessa looking after Oliver's administrative and public relations side of his novels. Oliver's best friend - Ray, impersonates Oliver by doing all the physical PR work, showing up to book signings, etc, pretending to be Oliver, allowing Oliver his freedom to write without having to go anywhere to promote his work. What could possibly go wrong?

Blind at birth, Oliver is unaware of the shenanigans going on between his wife and his best friend until the plot thickens and Ray accidentally backs into Oliver on the driveway and knocks him down. One of the side effects from this was Oliver's vision was miraculously restored - and this is when the story really heats up.

This book was a thoroughly enjoyable read with interesting characters and great plot twist to keep me hooked all the way through to a most satisfying ending! #Recommended.

Disclaimer: I was gifted with an ARC copy from the author.

Sherry H
5,0 van 5 sterren Gripping story!
5 mei 2019 - Gepubliceerd op Amazon.com
I love psychological thrillers but usually avoid them because they're too graphic - sex, language, even violence. Toni Pike's stories are "toned down" but every bit as suspenseful, maybe even more so since more is left to the imagination.

From the first paragraph, I could sense something ominous in the atmosphere, which stayed all through the background, even in the very "happy" moments of Oliver & Vanessa's honeymoon in Paris.

It was hard to put the book down. The story was straightforward and rolled right along. It was a very enjoyable read. In fact, I've enjoyed all of her books!

Thanks Toni for the chance to read the free ARC. I can hardly wait for your next book <g>
Meer lezen
Een iemand vond dit nuttig
Vertaal recensie in het Nederlands