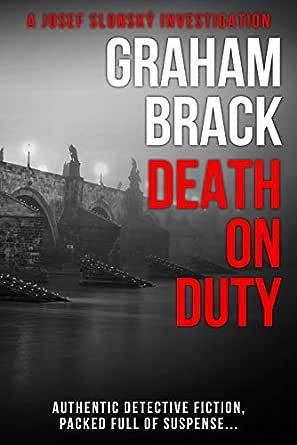 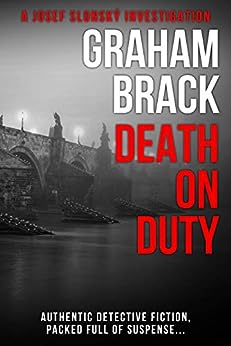 An international mystery with an unforgettable detective! Perfect for fans of Ian Rankin, Jo Nesbo and Peter Robinson.

Nothing is ever straightforward when Lieutenant Slonský is on the case…

The Bosnian government has sent an alert out to the criminal division in Prague that some of their ‘most wanted’ men may have escaped into the Czech Republic.

Lieutenant Josef Slonský, along with his dynamic officers, Kristýna Peiperová and Jan Navrátil are sent to comb the backstreets and search for informers.

But just as they appear to find one of the men, an undercover police officer is stabbed outside the flat they are watching, in broad daylight.

Will Slonský discover how the murder was committed with no witnesses in the middle of the day? Can he use his maverick tactics to catch his man?.

Or will his investigations lead to a Death On Duty…?

This is wonderfully written, contrasts the conflicts of the socialist era and the capitalist era with the very best of Czech cynical humor. It’s a wonderfully dry, funny - and still deadly serious detective procedural.

Christian
4,0 van 5 sterren Fun to read
9 november 2018 - Gepubliceerd op Amazon.com
Geverifieerde aankoop
Fun to read but not as good as the first two parts. The resolution of the case was a little too far fetched for my taste and did not really develop as integral part of the story
Meer lezen
Een iemand vond dit nuttig
Vertaal recensie in het Nederlands

CJ-MO
4,0 van 5 sterren Solid installment in an excellent series for fans of Colin Dexter
25 oktober 2018 - Gepubliceerd op Amazon.com
The criminal division in Prague receives an alert from the Bosnian government that dangerous criminals from their country may have escaped into the Czech Republic. While Lt. Josef Slonský, along with the two officers he mentors, are looking for informants who may be able to lead them to these men, an undercover police officer is stabbed. The investigation leads Slonsky and his team into the dangerous world of human trafficking, but in spite of the dangers, they are determined to help the vulnerable young women and get justice for Officer Hrdlicka.

"Death on Duty" is the third in the Josef Slonský series. I've read both of the prior books, but since the plot of this one stands alone, it's not necessary to have read the other books to enjoy this one. In all three books, the highlight is the character of Slonský. I enjoy his blunt sense of humor and all his rough edges that make him such a unique character. Beneath the jokes and love for coffee, beer, and sausage, Slonský is dedicated to his job and has a deep desire for justice for crime victims and integrity within the police force. The character of Slonský is basically the same in this outing, but he has grown. He is more sociable and has come to enjoy his role in mentoring the two young officers Navratil and Peiperova. Their interactions, as well as Slonský's interactions with his friends Mucha and Valentin, are very entertaining.

The different threads in this book were a little hard to follow at time, but as the story progresses, the seemingly unrelated portions come together for a satisfying conclusion. Fans of Colin Dexter will enjoy this intelligent and entertaining series. Because of certain developments in this book, I am already anticipating the next in the series. I highly recommend "Death on Duty" as well as the prior books in this unique series set in the Czech Republic.

I received this book through the courtesy of Sapere Books. The book was provided to me in exchange for an honest review.

booklover
4,0 van 5 sterren Gripping International Crime Fiction
12 november 2018 - Gepubliceerd op Amazon.com
Many thanks to the author / Sapere Books / Caoimhe O'Brien for the digital copy of this crime fiction. Opinions expressed here are unbiased and entirely my own.

Lt. Josef Slonsky is possibly the laziest policeman in Prague, probably in Central Europe. He rarely sees the need to rush and is frequently found conserving his energy with his feet on his desk. He meets with his protege and other members of law enforcement to discuss business over beer and sausages ..sometimes a biscuit. Detecting for 40 years, he is due to retire soon.

He has a wry sense of humor that not everyone understands and a strong stubborn streak that does him well. He doesn't exactly cross that line, but comes close enough to cause all kinds of problems.

Lieutenant Josef Slonský, along with his dynamic officers, Kristýna Peiperová and Jan Navrátil are sent to check with their informers after the Bosnian government send them an alert about possible criminals who have escaped.

As usual, Slonsky sits in a restaurant across from a hotel where these men may be hiding, and sends in Navratil to check it out .. and sends Kristyna back to the home office to arrange a Christmas party.

An undercover policeman is stabbed to death one sunny afternoon right cross from the hotel that has been watched. Who knew he was undercover? How did he mange to be killed without any witnesses in the brightness of the day?

It's up to Slonksy to find the killer/killers before anymore lives are snuffed out.

Lt. Slonsky is an unforgettable character.. reminding me of a teddy bear but with a brain and the smarts to always manage to solve whatever crime he's working on. But this time around, he may not be as smart as the killer.

His wry sense of humor and strong stubborn streak may be his saving grace in this gripping crime fiction. I look forward to his next adventure.