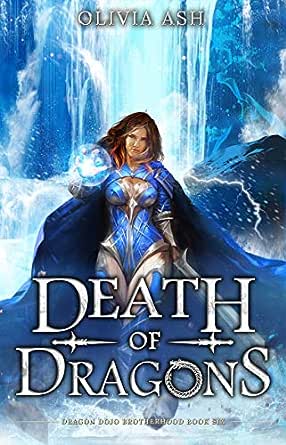 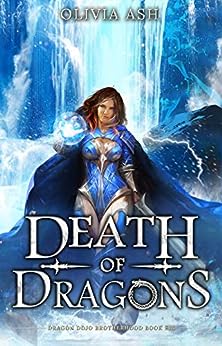 Death is in the air.

It always seems to be, lately. Blood. Mayhem. Destruction.

It just follows me.

The people after me—they’re relentless. They’ve hunted me from the moment I stepped into this new power. They say it’s not mine. That it belongs to the dragon Bosses. Hell, maybe even to the gods themselves.

Well, anyone who wants my magic can fight me for it.

I’m a diamond dragon, and the only one of my kind. Though I’ve been able to keep that a secret while my dragon and I get to know each other, we can’t hide the truth much longer.

Sooner or later, we’ll come across a battle I can’t protect her from. We’ll have to go into the ring together, and once we do, there’s no turning back.

Because there’s only one thing the Bosses want more than my magic.

Vengeance, justice, honor—whatever the powerful dragons of this world try to take from me, I’ll get back three-fold.

Good luck to the fools who try me.

Death of Dragons is a full-length novel with a badass heroine, a riveting storyline, and an alternative relationship dynamic. Get ready for a heart-pounding story filled with a dragon shifter romance unlike anything you’ve read before.

Most importantly—a young woman’s journey of justice, self-discovery, and freedom as she steps into the truth of who—and what—she is.

Warning: The Dragon Dojo Brotherhood is a reverse harem urban fantasy series with explicit scenes and is meant for mature readers who enjoy spellbinding stories with a few fan-your-face moments in their fantasy fiction. Prepare for lip-biting, fist-pumping, and lots of “hell YES” moments.
click to open popover

Kindle Customer
5,0 van 5 sterren Another fantastic book
21 oktober 2019 - Gepubliceerd op Amazon.com
Geverifieerde aankoop
I absolutely love this series. Rory is a take charge, no hands barred, badass heroine who will do what she thinks is right. I loved how we get to see some old wounds healed and Rory kicks major boss butt. I can't wait for the next book.
Meer lezen
2 mensen vonden dit nuttig
Vertaal recensie in het Nederlands

The Mysterious Amazon Customer
5,0 van 5 sterren Utterly fantastic
20 oktober 2019 - Gepubliceerd op Amazon.com
To my great frustration I somehow missed when Olivia Ash’s Fall of Dragons (Dragon Dojo Brotherhood, Book 5) was launched. The silver lining of this, though, is that once I read it I was able to immediately turn to Book 6, Death of Dragons. Lucky me, as these book were equally superb. I love this series, not just because I adore dragon fantasy tales (dragon stories are my catnip), or because reverse harem romance tales are soooo yummy when done well (certainly the case here), but because the plot, character development, world-building and writing of this series are all simply fantastic. I’m totally invested in Rory and her guys, and now that she’s finally come into her being the only diamond dragon, with the vast possibilities (powers) - and, yes, dangers that entails, things are just getting even more “interesting”. I’d always bet on her, though, as she’s just the supreme kick-a** sorta gal I adore (and her guys are nothing to ignore either, and I’m not just talking about the *sigh* super yummy “adult” adventures). All in all pretty perfect and highly recommended.
Meer lezen
2 mensen vonden dit nuttig
Vertaal recensie in het Nederlands

Kindle Customer
5,0 van 5 sterren Love this series
4 december 2019 - Gepubliceerd op Amazon.com
I swear each new book in this series is better than the last. There are so many twists and turns. From enemies, friendship, betrayal, and enemies to friends, there are diverse characters. I love to watch Rory mature and develop into a strong independent woman, who is leaning to forgive and accept herself and to trust. I also love her hot men and her relationship with each one. This is truly an enjoyable series. This series must be read in order, otherwise it is hard to understand the purpose of the characters in the book along with how/why the plot develops.
Meer lezen
Een iemand vond dit nuttig
Vertaal recensie in het Nederlands

Lady Lightning
5,0 van 5 sterren O M G
19 januari 2020 - Gepubliceerd op Amazon.com
What a heart stopping non stop action filled book this one was. I’m in love with Rory and all her men, how she manages to survive all the battles she gets caught in are some of the most amazing writing. Olivia finds more and more action for Rory every time, as for the sexy scenes with each of her men, I’ve never had so many cold showers in my life. Can’t wait to see where Rory goes from here. Highly recommended.
Meer lezen
Een iemand vond dit nuttig
Vertaal recensie in het Nederlands
Ga naar Amazon.com om alle 21 recensies te bekijken 4,9 van 5 sterren
Terug naar boven
Over ons
Verkoop bij ons
We helpen je graag
© 1996-2020, Amazon.com, Inc. en dochterondernemingen