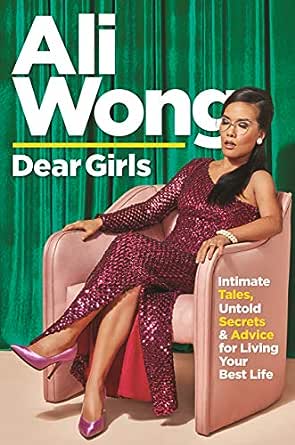 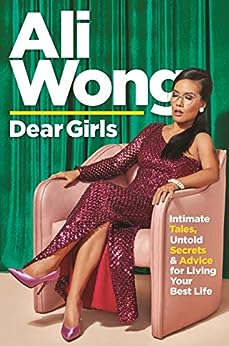 "[Wong] spins a volume whose pages simultaneously shock and satisfy. . . . Dear Girls is not so much a real-talk handbook as it is a myth-puncturing manifesto."--Vogue "[A] refreshing, hilarious, and honest account of making a career in a male-dominated field, dating, being a mom, growing up, and so much more... Yes, this book is addressed to Wong's daughters, but every reader will find nuggets of wisdom and inspiration and, most important, something to laugh at."--Bustle "Absurdly funny."--Parade "Dear Girls can be crude and flippant, LOL-dense and breezy--so breezy, in fact, you will be desensitized to the grossest of Wong's gross-outs by chapter one, at which point you have already learned how to hold in a fart during yoga. But as with her stage comedy, she is also sneakily thoughtful about the public roles she occupies--Asian American, working mom, woman on comedy stages--and the come-from-behind grind they necessarily demand."--The Washington Post

"It should come as no surprise that Ali Wong, who made us cry from laughter in her raunchy and relatable Netflix special, is as adept a writer as she is a comedian."--Refinery29 "By now, you know that Ali Wong doesn't have a filter--and thank goodness for that. She brings the same level of candid heart and humor that you love from her comedy to her new book, covering everything from growing up in San Francisco to finding comedy to having kids. Dear Girls is a ridiculously funny and enlightening collection of letters to her daughters, but it may be just the thing that you need to hear, too."--HelloGiggles "A collection of letters to her baby girls that are barn-burning reflections on being a working mom, marriage, sex, and more. If you've ever wanted to have Ali Wong's signature voice in your head for 200+ pages, now's your chance."--Glamour

Ali Wong's heartfelt and hilarious letters to her daughters cover everything they need to know in life, like the unpleasant details of dating, how to be a working mum in a male-dominated profession and how she trapped their dad.

In her hit Netflix comedy special Baby Cobra, Wong told the world her remarkably unfiltered thoughts on marriage, sex, Asian culture, working women and why you never see new mum comics on stage but you sure see plenty of new dads.

The sharp insights and humour are even more personal in this completely original collection. She shares the wisdom she’s learned from a life in comedy and reveals stories from her life off stage, including the brutal single life in New York (i.e. the inevitable confrontation with erectile dysfunction), reconnecting with her roots (and drinking snake blood) in Vietnam, tales of being a wild child growing up in San Francisco and parenting war stories. Ali Wong's letters are absurdly funny, surprisingly moving and enlightening (and gross) for all.
Alle bekijken
click to open popover

Michael smith
5,0 van 5 sterren My wife is happy and so is Ali wongs pockets.
18 oktober 2019 - Gepubliceerd op Amazon.com
Geverifieerde aankoop
I bought this for my wife, she's a big fan of Ali. The book came in perfect condition and my wife loves it. There's my 5 stars.
BUT I was just scrolling through the reviews and comments and a few people were saying that the book was inappropriate. I can only assume these people did not watch her stand up specials... lol.

Irina
5,0 van 5 sterren Ali Wong is just beginning
20 oktober 2019 - Gepubliceerd op Amazon.com
Geverifieerde aankoop
Loved it! Yes, it is explicit (very much so) and that’s what makes it such a liberating read. The stories are irreverent without being cruel, sweet without being too sentimental and Ali’s signature sincerity cuts through each one. I especially loved her commentary on motherhood (finally someone not glossing over how hard it is!) and her reflection on being raised by parents “suffering” from “immigrant paranoia”. I wasn’t raised by immigrant parents, but I was raised by a family who experienced war, famine and communism and as a result passed on a scarcity mindset and a great deal of stoicism to all of us, but also we were a family who laughed a lot and where brutal honesty reigned. I’ve rarely seen this part of my own childhood represented anywhere ever (!!) and even though it’s not the same story, I felt so understood reading this. The pervading feeling after reading this book: Ali Wong is just beginning and I’m here for it.
Meer lezen
44 mensen vonden dit nuttig
Vertaal recensie in het Nederlands

Chipotle Ferraro
3,0 van 5 sterren One of the better celebrity autobiographies
19 november 2019 - Gepubliceerd op Amazon.com
Geverifieerde aankoop
Before I read this, I really didn’t like Ali Wong that much, but after reading it I see her as a much more genuine person. It’s a fully disgusting book, so be prepared for that, but it’s also a fun and light read with a few really funny lines. My main takeaways were “I am so ****ing sick of rich people” and “Are Ali Wong and I actually the same person?” ...No, hell no. I will never pay to go to Equinox and even though I’ve worked for a functional medicine doctor I’m not into natural remedies. But, we’re more similar than I thought.

In the first half of the book I desperately wanted to take her by the shoulders and say “YOU HAVE LEAD AN EXTREMELY PRIVILEGED LIFE! CAN YOU LIKE, RECOGNIZE THAT?” Still, it was fun to realize there are experiences we share and it was good to try to see things from her perspective.

You will definitely be super hungry while reading — she talks about food a lot, so you’re going to get tugged back and forth between thinking ‘oh my god ew’ during the parts about, err, various peoples’ bodies, and having your mouth water as you think about soup. So honestly don’t buy this book if you don’t live near some good Vietnamese restaurants or have a friend from Vietnam who likes to share their cooking.

Ultimately, I think the author actually has a pretty narrow world view, but she does make some awesome points about dealing with that very thing so I have to say I think she has a good heart and tries to be responsible with her opinions.

The one thing I wish I could say to the author is that, in regard to her complaints about the people in the US who live on Kraft Singles and white bread — they do it because they’re poor. They’re also ignorant of other cultures largely because they’re poor. Rich people in the US eat foie gras, bone marrow and oysters and have been doing it at least since I was a kid in the 90’s, watching Martha Stewart give her tips for getting marrow bones super white before serving. A lot of Vietnamese cooking also comes from French recipes, and the French also eat escargot and chicken hearts, which your average white kid in America probably hasn’t tried if they haven’t been taken to a French restaurant. If you’re thinking, “You can get chicken hearts for like $1.98 at Uwajimaya,” let me tell you, poor people don’t really go places they’re not sure they’re welcome, and I’ve been straight up asked “Why are you here?” at Uwajimaya. So, I’m sorry your rude friends aren’t comfortable with some dishes, but speaking as a former rich kid gone too poor to eat anything but macaroni when the economy went bad: My snow white Polish *** has been roasted in a high school lunch room for eating guacamole. Kids are jerks, the only real privilege is money, and you’ve had more than enough your whole life.

So... as you can tell, the book chafes a little. I haven’t had an easy life so it’s very, very hard for me to take Ali Wong’s complaints seriously when she got to not only go to college but study abroad twice. She even has the nerve to write about studying abroad like it’s a chore everyone should undertake even though it’s inconvenient, not an impossible and expensive privilege most people will never get. Is racism a huge problem in America? Yes! Is white privilege real? Yes! Is Ali Wong writing about any of it? ...Nah? But she definitely thinks she is.

I do think it’s important for wealthy people of color to give voice to the things non-wealthy people of color don’t have a platform for, but I don’t like the way Ali Wong does it. Like I said, she makes it tough to take her seriously, and she sounds naive even when she talks about things she’s lived through.

All in all, not bad for a celebrity book but not what I’d call beautifully communicated. A good book to read on the bus.

sandi patti
2,0 van 5 sterren Beyond nasty and disgusting
27 oktober 2019 - Gepubliceerd op Amazon.com
Geverifieerde aankoop
X rated. One star for humor and one star for her husband's very touching and insightful afterword to his girls. No inappropriate words or references were needed to express his love for his family. For her part, I cannot imagine that any mother or daughter would find this trash acceptable. She must need the money and fame to be willing to sacrifice her soul in this way. Hilarious, but I pity her.
Many women have written with humor and transparency about their lives, but without all the unrelieved whining and unnecessary filth. Some of them are even insightful as well as life-aloud funny. Try Ann Lamott as an example. I treasure her books. Sorry, Ali, but after the laughs, this one is trash.
Meer lezen
21 mensen vonden dit nuttig
Vertaal recensie in het Nederlands

DisneyDenizen
4,0 van 5 sterren CRASS AND CRUDE
15 oktober 2019 - Gepubliceerd op Amazon.com
This book is ostensibly written for the author's daughters. It is extremely vulgar, so much so that it made this very liberal reader uncomfortable. Sex, sexual references, and talk of sexual body parts feature from the start – all done in a way that is not at all tasteful.