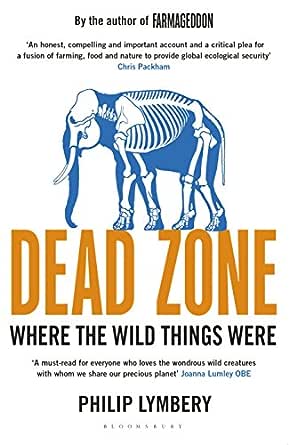 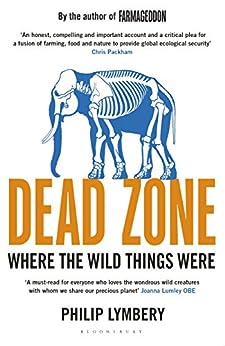 Dead Zone: Where the Wild Things Were (English Edition) Kindle-editie

"This sobering but well-written critique will interest Michael Pollan fans and anyone curious about the environmental impact of modern agribusiness." - Library Journal

"Highly informed, utterly compelling . . . Lymbery's narrative threads are subtle and replete with powerful evidence . . . He does a superb job of equipping us with the hard facts. No author can do more." - New Statesman

"This eye-opening book, urging a massive rethink of how we raise livestock and how we feed the world, deserves global recognition" - Hugh Fearnley-Whittingstall on FARMAGEDDON

"A devastating indictment of cheap meat and factory farming. Don't turn away: it demands reading and deserves the widest possible audience" - Joanna Lumley on FARMAGEDDON

"This incredibly important book should be read by anyone who cares about people, the planet, and particularly, animals" - Jilly Cooper on FARMAGEDDON

"Lymbery brings to this essential subject the perspective of a seasoned campaigner - he is informed enough to be appalled, and moderate enough to persuade us to take responsibility for the system that feeds us" - Guardian on FARMAGEDDON

A tour of some of the world's most iconic and endangered species, and what we can do to save them.
Climate change and habitat destruction are not the only culprits behind so many animals facing extinction. The impact of consumer demand for cheap meat is equally devastating and it is vital that we confront this problem if we are to stand a chance of reducing its effect on the world around us.
· We are falsely led to believe that squeezing animals into factory farms and cultivating crops in vast, chemical-soaked prairies is a necessary evil, an efficient means of providing for an ever-expanding global population while leaving land free for wildlife
· Our planet's resources are reaching breaking point: awareness is slowly building that the wellbeing of society depends on a thriving natural world
From the author of the internationally acclaimed Farmageddon, Dead Zone takes us on an eye-opening investigative journey across the globe, focussing on a dozen iconic species one-by-one and looking in each case at the role that industrial farming is playing in their plight. This is a passionate wake-up call for us all, laying bare the myths that prop up factory farming before exploring what we can do to save the planet with healthy food.
Alle bekijken
click to open popover

Lauren L
4,0 van 5 sterren A difficult but powerful read
28 november 2017 - Gepubliceerd op Amazon.com
Geverifieerde aankoop
One of the most difficult books I've ever read; literally had to steel myself each day before resuming it's that distressing, despite Mr Lymbery's best efforts to leaven the load with his (nature) rambles, travelogue and good news stories interspersed throughout the relentlessly bleak picture he paints of the environmental catastrophe wrought by global meat production. He nonetheless mounts a powerful, cogent and damning case - should be compulsory reading for all of us dependent on this planet to sustain us.
Meer lezen
Vertaal recensie in het Nederlands

Anne M Chappel
5,0 van 5 sterren A devastating indictment of our wasteful and cruel farming practices
10 januari 2018 - Gepubliceerd op Amazon.com
A sobering book. Well researched and written. We try to ignore what is obvious to most of us: factory farming is a cruel practice and a wasteful system. I wish I could remember just some of the facts from this book. Time and time again the story is told: we are destroying our planet, overexploiting what we have inherited - at a simply alarming rate. Whether its the mid-west of the USA, the grasslands of South American, the fish stocks of the world, the soils of our rich farming lands - we are living like there is no tomorrow to protect wonders and gifts of our earth. And then I come to write a review and instead of finding thousands of readers have responded, I find I am the fourth person to write a review. The truth is out there and we are ignoring it at our peril.
Meer lezen
Een iemand vond dit nuttig
Vertaal recensie in het Nederlands

Mydogjoe
5,0 van 5 sterren Excellent book
12 juli 2017 - Gepubliceerd op Amazon.com
Dead Zone is an astonishing feat. To describe it as well-written and well-researched is an understatement. The author has traveled around the world to document the (often unexpected) effects of human eating habits on wildlife. Each chapter focuses on a specific wild animal and how its fate has become unfortunately interlinked with human eating habits. They include the elephant, bison, shrimp, water vole, jaguar, penguin, and bumblebee. Lymbery’s style is compelling and his prose descriptive. Moreover, his background as CEO of Compassion in World Farming gives credibility and greater depth to his story. Highly recommended!
Meer lezen
Een iemand vond dit nuttig
Vertaal recensie in het Nederlands