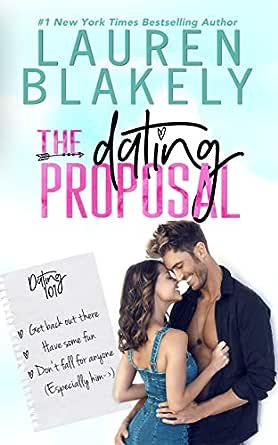 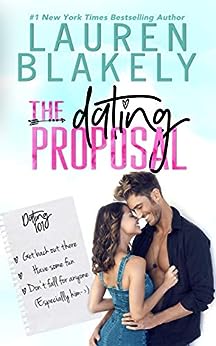 Watch out world — I’m ready to date again.
The seven years I invested in my ex left me with nothing but scorch marks from the way he peeled out and left me at the altar. I’m not looking to put my heart into a relationship any time soon. But getting back out there? That sounds like a helluva good idea to get my groove back.

Then I bump into Chris….Clever and funny, with a sexy surfer’s bod and a brilliant nerd brain, he has just the right screwdriver to fix my hard drive. (Yes, the one for my computer.) I wouldn’t mind dating him. The trouble is he just proposed to me—to be the new dating guru on his TV show—and now he’s my new business partner.

What happens when you meet the right person at the wrong time?

Danielle
5,0 van 5 sterren 5 STARS! Sweet & swoon-worthy romcom!
6 mei 2019 - Gepubliceerd op Amazon.com
Geverifieerde aankoop
Several years ago, I was binge-reading the Caught Up in Us series by then new-to-me author, Lauren Blakely. I remember each of those books—I loved them all. They were all so witty and sexy and romantic and well titled – Trophy Husband was my favorite title of the series. Fast forward a few years, and Blakely has reimagined that classic with spectacular results in The Dating Proposal. It’s fresh, it’s fun and it’s full of the feel good, flirty, feisty romance this reader has come to love from her.

I don’t want to give a single word of this story away. I want anyone reading this review to go in as blind as I did, especially if you’ve read its predecessor and you think you know what it’s going to be all about. (Trust me, you don’t.) I’ll just say it’s so much more – more laughter, more heat, more chemistry. This is the kind of story that has romance readers squealing in delight, swooning in their seats and laughing out loud. I loved every single word, every single moment and innuendo.

Blakely is on my short list of no-fail, never-let-me-down authors. I reach for her books when I need a pick me up, and she always but always gives it to me. The Dating Proposal is another in a long line of Blakely’s contemporary romances and romantic comedies I will reach for time and time again. Five smooches from me!

mjlovestoread
5,0 van 5 sterren Sweet, sexy and beyond touching, The Dating Proposal is truly wonderful from start to finish!
6 mei 2019 - Gepubliceerd op Amazon.com
Geverifieerde aankoop
Once again we get classic Lauren Blakely. This reboot of sorts of Trophy Husband, a book I read many years ago, is just wonderful. The Dating Proposal features McKenna Bell and Chris McCormick and these two from the very first moments when they meet have it all going on. The flirty banter Blakely is known for was never more present than in this book. And I was caught up in their updated story all over again!

For me, a long-time fan of Blakely's work, I was a very curious as to how she would revamp this story. And I am more than happy to report that I wasn't disappointed one bit! The parts she kept in, had me sighing and smiling huge as I remembered this fun, sweet and beautifully touching tale of finding the right one when you least expect it.

Giving us Chris's POV this time around solidified his romance with McKenna perfectly. There's none of that circling around and around when it comes to a Blakely book, as she puts each of them in each other's paths to ensure they find their happy and we don't suffer too long waiting for it!

It's a clever storyline with McKenna and her besties, including her sister Julia before Clay (!), setting her on a course of simply dating the old-fashioned way without the use of modern technology and various apps. With Chris as a new-found friend, it's just a matter of time before she realizes he is the one she's been looking for all this time. The fact that he figures that out right around the same moment leads to some incredible scenes of love and passion and overall glee.

The Dating Proposal brought me back to the beginning when I fell hard for Lauren Blakely's words and I'm beyond thrilled to have been able to visit these endearing characters once again. Including, of course, Ms. Pac Man who is the best 4-legged friend a girl can have.

A book filled with all the reasons why I read, I happily give The Dating Proposal a huge 5 stars!!

Stacy Hahn
5,0 van 5 sterren I loved it!!
6 mei 2019 - Gepubliceerd op Amazon.com
Geverifieerde aankoop
The Dating Proposal was fantastic !! If you’re a Lauren Blakely fan, then I’m sure you’ve probably read the Trophy Husband, which was amazing as it was, but fast forward to the revamped and renamed book, The Dating Proposal, is even better. We get both McKenna and Chris’ POV’s. This book will make you feel good!

After being left at the altar, McKenna never expected she’d open herself up to love again. Her fashion blog is her outlet and she decides to pair her blog with dating to help get herself out there again.

In comes Chris who turns out to be her perfect match. After fixing her hard drive, they realize how much they have in common. So much so that they end up working together. Their shared love of video games and orgasmic Katsup make them fall for each other. However, they both have trust issues that keep getting in the way.

Prepare yourself for lots of laughter, love and friendship!

K S
5,0 van 5 sterren I love re-imagined Chris and McKenna.
6 mei 2019 - Gepubliceerd op Amazon.com
Geverifieerde aankoop
So full confession - Chris McCormick was my very first BBF! I absolutely loved "Trophy Husband", so I squealed with joy at the chance to read their new re-telling and this one did not disappoint.

"I can't let another guy have the chance to go on a date with this fantastic woman before I do." Seriously - what is there not to love about this guy. And one of my favorite scenes with the Qbert machine stayed in - woot woot!! You'll never look at arcade games the same. And the new Qbert scene - oh be still my heart!!

Chris and McKenna both have understandable trust issues - man McKenna's ex is a d**che!! They meet by happenstance, connect, then decide to have a business arrangement which makes them gun shy about anything more. But you can't deny this kind of chemistry and Chris is just flat out HAWT!! So casual they go...until it isn't...until someone freaks...until... Well you have to read it to find out the rest.

"What if he's your sailboat in the moonlight?" I say he's mine!