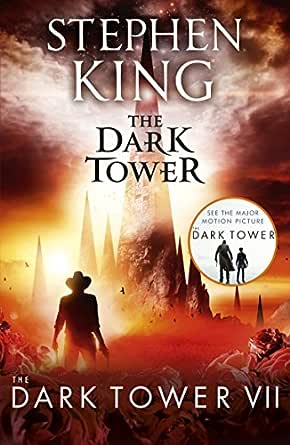 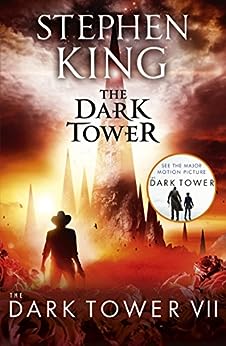 The final book in King's epic The Dark Tower series, sees gunslinger Roland on a roller-coaster ride of exhilarating triumph and aching loss in his unrelenting quest to reach the dark tower.

Roland Deschain and his ka-tet have journeyed together and apart, scattered far and wide across multilayered worlds of wheres and whens. The destinies of Roland, Susannah, Jake, Father Callahan, Oy, and Eddie are bound in the Dark Tower itself, which now pulls them ever closer to their own endings and beginnings and into a maelstrom of emotion, violence, and discovery.

And as he closes in on the Tower, Roland's every step is shadowed by a terrible and sinister creation. Finally, he realises, he may have to walk the last dark strait alone...

JOIN THE QUEST FOR THE DARK TOWER...

Hodder are reissuing and rejacketting all seven volumes in Stephen King's epic, fantasy series The Dark Tower in anticipation of the brand new Dark Tower novel, THE WIND THROUGH THE KEYHOLE, coming in April 2012.

Graham Downs
4,0 van 5 sterren Required Reading for Stephen King Fans
17 november 2019 - Gepubliceerd op Amazon.com
Geverifieerde aankoop
I've spent the better part of this year on The Dark Tower series (reading an average of one a month). Was it worth it?

Overall, yes. Yes, I think it was. None of the individual volumes were spectacular, and in fact, I almost gave up a few times, but I'm glad I got to the end. The Dark Tower series is nothing short of “required reading” for any serious Stephen King fan.

This last volume is LONG, but it has to be, because it has to tie up all those loose ends. King leaves nothing unaddressed. Nothing hanging. As to the ending, I suspect many readers will hate it. Personally, I thought it was perfect. It's sad (most of the book is sad, if I'm honest); it's gut-wrenching, in fact, but I agree with what Mr King wrote in his afterword: it was the right ending, and because of that, I'm satisfied.

I think what makes this series so important, even though none of the individual pieces are exactly “literary masterpieces”, is that once you’ve read it, you realise that every one of King’s books is actually set in the same universe. Whether you’re reading about Carrie, or Dannie Torence, or an evil extra-dimensional clown, you know that outside of the story you’re reading, The Dark Tower looms. And Randall Flagg et al. And The Crimson King.

If you’ve never read the Dark Tower, your subconscious mind is still telling you, as you read those other stories, that there is something bigger at work. Bigger than the story you’re reading, even though you can’t quite put your finger on it.

So if you consider yourself a Stephen King fan, do yourself a favour and read this series. There will be times when it feels like a chore, and there will be books you feel you have to force yourself to get through, but do it anyway. Trust me, it’ll be worth it.
Meer lezen
2 mensen vonden dit nuttig
Vertaal recensie in het Nederlands

Shadowstorms
5,0 van 5 sterren Excellent book, excellent condition.
5 maart 2017 - Gepubliceerd op Amazon.com
Geverifieerde aankoop
The only complaint I could possibly make is that the book came without a dust jacket. Big deal. Otherwise it is in excellent condition & may well never have been read. So that's that for the condition.

I've been a Stephen King fan since I was technically too young to read his books (I first read "The Shining" at 5 1/2), but the Dark Tower series has always been one of my favourite things. Yeah, people complain that it was too long between books and that each book was too stylistically different and that they just plain don't like what happens in a book, but here's one 'constant reader' who has nary a complaint. I have loved the whole series and this the final book is absolutely perfect. I read it cover to cover in one sitting and just sat there smiling. If you're anything of a Stephen King fan, I strongly recommend the Dark Tower series. And if you've read all of them but this one, shame on you! Get it right now and start reading! You will not be disappointed!
Meer lezen
4 mensen vonden dit nuttig
Vertaal recensie in het Nederlands

Mojo
5,0 van 5 sterren A Fitting End
26 december 2017 - Gepubliceerd op Amazon.com
Geverifieerde aankoop
It's been a long time since I first read the Dark Tower. It was originally a wait I thought would not end, but thankfully it did and that was now well over 10 years ago. I thoroughly enjoyed reading the series again over the last few months. It is a long read and a time was slow and hard going. But it is always worth it.
The last book if the series is arguably its best. I always appreciated that the loose ends were tied adequately. For me that was important at the time and I found it satisfying again. This last story is full of the twists and turns you come to expect as you journey to the tower. It is final and at time pulls hard on the heart.
This is a great read. A great way to finish the epic story of Roland and the quest for the Dark Tower.
Meer lezen
4 mensen vonden dit nuttig
Vertaal recensie in het Nederlands

B Rad
2,0 van 5 sterren Regret (spoilers within)
11 september 2017 - Gepubliceerd op Amazon.com
Geverifieerde aankoop
I regret having started this series but felt like I couldn't turn back when things started to go south in the "Wolves of Calla." Much like Roland, I was bound to complete this thankless and grueling journey regardless of the personal suffering I had to endure. I was genuinely intrigued in the beginning of the series but the moment King introduced himself as a character in the book I was dumbfounded and disappointed. I don't know if it was narcissism or a lapse of judgment but it completely ruined the story for me. I can't emphasize enough how jarring and terrible it was to read a story where the author is writing about himself.

If you have read through book six and are reading this then it's already too late and I wish you well on the final leg of your journey. However, if this reaches you before you have read a single page do yourself a favor and keep it that way, say thankya.
Meer lezen
4 mensen vonden dit nuttig
Vertaal recensie in het Nederlands
Ga naar Amazon.com om alle 1.770 recensies te bekijken 4,5 van 5 sterren
Terug naar boven
Over ons
Verkoop bij ons
We helpen je graag
© 1996-2020, Amazon.com, Inc. en dochterondernemingen