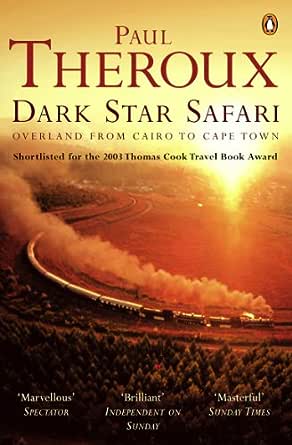 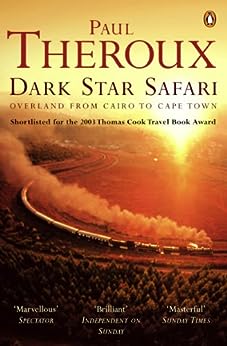 Engagingly written, sharply observed; another winner from Theroux.
Kirkus Reviews, Starred His encounters with the natives, aid workers and occasional tourists make for rollicking entertainment, even as they offer a sobering look at the social and political chaos in which much of Africa finds itself.
Publishers Weekly No mere tale of travel mishaps....Safari is Swahili for journey, and Theroux's is truly fantastic. Library Journal Starred Few recent books provide such a litany of Africa's ills, even as they make one fall in love with the continent.
The Washington Post Theroux, one suspects, could be a headache to travel with; resourceful, courageous and indefatigable, as well as crusty, opinionated and contradictory. But listening to him recount his adventures... is another matter. He can make you forget to eat, this man.
The San Francisco Chronicle Reading Theroux may make you cancel your plane tickets and settle in at home instead for a great read. The sometime novelist is at his most masterful with DARK STAR SAFARI. (A) Entertainment Weekly Armchair travelers will wish the book went on twice as long -- and that is something, considering that the book runs more than 400 pages. This is a masterwork by a master writer.
Minneapolis Star-Tribune Paul Theroux. Travel. Africa. You need a better reason to read?
The San Diego Union-Tribune The next best thing to going to Africa is to read (compulsively) this account by Paul Theroux of his overland expedition from Cairo to Capetown.
Boston Herald [Theroux] is at his writerly best when conveying the beauty and wonder of Africa.
The Miami Herald A gritty lesson in history, politics, aid relief and tourism; a middle-aged man's meditation on life and travel; and, above all, a masterpiece of observations that makes sense of senseless chaos and staggering wonder. Readers will be glad Therous made the trip.
Town and Country DARK STAR SAFARI reveals the mystery of Africa, a continent of incredible disparity and resilience.
Playboy This new travelogue ... is perhaps his most captivating work of perigrination since The Great Railway Bazaar.
The Chicago Sun-Times Theroux is the thinking man's travel writer; in a seemingly casual, wandering fashion, he delivers a complete portrait of a continent's people, politics and economy. Bookpage Part of Dark Star Safari is pure entertainment; travelogue in a grand, epic style. But Theroux also offers a sobering, contemporary look at the social and political morass in which much of Africa is mired.
Sacramento Bee If you have even the slightest interest in Africa, travel, good writing, the modern world, the future, cities, nature, human society, love, courage--well, life in general--you are going to have to be called to the dinner table six times before you put this book down. The Chicago Tribune I know and have traveled in Africa, so I can proclaim with admiration that Theroux, the disheveled, often grumpy, sometimes euphoric sojourner who shares his latest adventures in Dark Star Safari, is an intrepid traveler worthy of the reputation that precedes him. The Houston Chronicle opinionated but informed, and highly readable.
Star Ledger A marvel of observation.... Theroux is near faultless in his expression of material about Africa, a continent where he taught 40 years ago, and which he clearly loves.
Buffalo News You won't find this trip advertised in travel brochures, but it's well worth taking vicariously.
Atlanta Journal Constitution Neither a sensationalistic reveler in the pain of others, nor a hopeless romantic, Theroux chronicles a journey through an Africa full of decay and beauty, fear and joy, misery and perseverance. Denver Rocky Mountain News Dark Star Safari is by turns hilarious and harrowing. It is an exploration of change, both in Africa -- its ruined cities, its confouding beauty -- and in Theroux's own life.
Austin Chronicle Have no fear, Paul Theroux is as grumpy as ever. In this maddening, exhilarating, frustrating and thoroughly entertaining journey through Africa, Theroux is at his bracing best...
The Chicago Tribune This is the most passionate and exciting of Theroux's half-dozen major travel books.
The Associated Press an exciting adventure tale, filled with fabulously wonderful characters.
Santa Cruz Sentinal [Theroux's] witty observations and obvious love and curiosity for Africa should help make this entertaining epic a yardstick for future travel writing.
The Daily Yomiuri [Theroux's] storytelling and eye for detail are unmatched.
The Los Angeles Times Still the dean of this genre, the irascible Theroux is the ideal companion for armchair travel.
The Los Angeles Times --Deze tekst verwijst naar de paperback editie.
click to open popover

Neil Cotiaux
5,0 van 5 sterren Hands Down, Theroux's Best "Travel" Book
17 mei 2018 - Gepubliceerd op Amazon.com
Geverifieerde aankoop
By far, Theroux's best travel book. And they're all, at a minimum, extremely worth my time. What made this one exceptional was the timing of the read. I had held back on Dark Star Safari until 2018 after overdosing on other Theroux titles and feeling the need to sample other writers (many of them cited in Theroux's own works). His thesis - that Africa is doomed barring a miracle (sorry, Paul, that thought may be anathema) gains even more credence with me nearly two decades after Theroux journeyed from Cairo to Capetown, for this year has seen a spike in African strongmen rigging the game to stay in power and some economies struggling to diversify after the single-commodity free-falls of several years back. Local decision-making with roots in tribal governance, versus central government planning and concomitant shenanigans, seems to work best, the author suggests. And as an investor in a Sub-Saharan mutual fund, it's clear after reading this book that both Commerce Department analyses and investment come-ons remain woefully rose-colored. So Theroux, yet again, scores high marks for a very clear-eyed and sober approach to some very complex subject matter.
Beyond the author's mastery of material (he has done plenty of homework and enjoys numerous contacts on the continent), Theroux's chops as an on-the-ground, sometimes in-your-face journalist, his disdain for "suffering fools gladly" and his ability to craft compelling mise-en-scene makes his work soar. The first 100 or so pages of Dark Star Safari are simply a delight to read, and as he moves down the spine of Africa his portraits of merchants, farmers, bureaucrats and fellow travelers prove deep and telling and sometimes just rollicking fun. Theroux has come light years from the work that made him famous, The Great Railway Bazaar, and what once amounted to caricatures in some cases are now real, live human beings that Theroux befriends and respects. (Having said that, "Bazaar" is still one of my favorite books.)
Another great man of letters, Tom Wolfe, died this week. Reading his obituary, I realized for the first time that Theroux was one of the early proponents of The New Journalism that Wolfe helped found: painstaking attention to journalistic detail, no-holds-barred first-person narrative, and a unique, sometimes eye-popping way with the language that quickly drew lifelong fans. Here's hoping that Mr. Theroux, now pushing 80, isn't finished writing.

Renee C. Ozer
4,0 van 5 sterren Paul Theroux went to East Africa so you don't have to . . .
22 mei 2019 - Gepubliceerd op Amazon.com
Geverifieerde aankoop
Theroux is a wonderful, pull-no-punches writer, so he doesn't shy away from describing the poverty, maddening inefficiency, corruption, and environmental degradation he sees, contrasting it sadly with the promise he held as a Peace Corps volunteer in the East Africa of the 1960s. He skewers humanitarian workers (whom he views as promoting dependency (recounting a volunteer's reference to a "wet feeding" of Africans), while at the same time driving the latest Safari-worthy SUVs and refusing to give him a ride). Local people crowd under a remaining tree in the hot sun, without anybody taking the initiative to plant some more shade trees. They also allow libraries established in the 1960s to fall into ruins, the books having been stolen long before. However, in the time since the 1960s, the population of the area has more than quadrupled, which you wouldn't learn from this book, which perhaps explains more than the apathy of the local people. I would have liked to see more background on demographic, political, economic, and ecological ravages over the past 50 years that help explain the current situation. I think part of the sourness is Paul Theroux's confrontation with his lost youth, but certainly the thievery and parasitic infestation he experienced would dampen anyone's enthusiasm for this trip.
Meer lezen
4 mensen vonden dit nuttig
Vertaal recensie in het Nederlands

James Reynolds
4,0 van 5 sterren If I ever wanted to go to interior Africa I wouldn't now
18 juni 2017 - Gepubliceerd op Amazon.com
Geverifieerde aankoop
I admire the author who took this most taxing trip at the age of sixty from Cairo to Cape Town in early 2001
Vivid descriptions of places and people I will never experience with controversial and unfortunately repetitive opinions about aid workers and put downs of tourists, probably most of his readers
I tend to believe him about aid workers because I've met a few back home living very well and resent him about tourists because I am one, plus he ends his book going on a five trophy safari himself so hypocrisy is not a fault he avoids
However accurate his depiction of aid workers in their brand new range rovers is, it is hard to believe they are the cause of African poverty and corruption and he ends with a glowing description of South Africa that would more logically lead you to conclude that blacks are the problem and they should have kept whites in charge