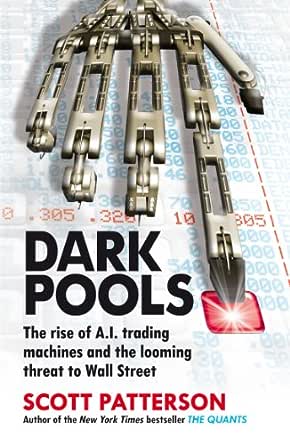 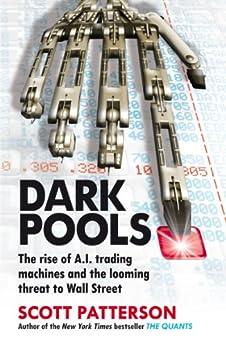 Dark Pools is the pacy, revealing, and profoundly chilling tale of how global markets have been hijacked by trading robots – many so self-directed that humans can’t predict what they’ll do next.It’s the story of the blisteringly intelligent computer programmers behind the rise of these ‘bots’. And it’s a timely warning that as artificial intelligence gradually takes over, we could be on the verge of global meltdown.

‘Scott Patterson has the ability to see things you and I don’t notice.’ Nassim Nicholas Taleb, New York Times bestselling author of Antifragile, Fooled by Randomness and The Black Swan

This book is a 'must read'. Not only does it give a great summary on how the stock market became computerized (as other reviewers mention), but it really helped me understand how the modern market came to be.

My goal in reading the book was to up my trading game, and while the book gives few trading ideas, it does a great job explaining how 'big money' and the HFTs game (cheat? trade?) the market. Understanding this alone really helps me understand price action at a whole new level.

I did have to remove one star though for the authors lack of understanding of computer algorithms and how they work. He uses "AI" as a catch-all phrase for any computer algorithm, even if it was a crude program that simply trades a stock spread.

Dan Leithauser
5,0 van 5 sterren Read after Flash Boys
22 juni 2014 - Gepubliceerd op Amazon.com
Geverifieerde aankoop
I read Michael Lewis's Flash Boys first. Flash Boys was one of the few non-fiction books that read like a fictional techno action story. Which is probably part of the reason it has received so much attention. Flash Boys left me wanting more...more details about how high frequency trading came about, the people who made it happen, and the motivations behind it all. That is exactly what Dark Pools delivers. The who, what, and why of HFT.

The "who" are highly intelligent people, technologists, programmers, physicists, statisticians... and less of the greed driven financiers that you might expect.... although there are plenty mixed in, The "what" is algorithms, computer programs, proximity to trading centers, and information churning through these programs discerning market moves in pico-seconds. The why -- especially at the beginning is less about making money and more about young technologists wanting to snub the establishment of Wall Street, open up markets for everyone, and making the whole process more efficient by essentially removing persons from the transaction.

Of course, all of this leads up to the last couple of years where the SEC is a slow moving entity imposing regulations that seem quaint compared to the speed at which the HF traders adapt and evolve. It is pitting a human against a computer in an algo war that is already rigged for the computer to triumph. Or maybe like the designer drug maker that is always one molecule ahead of the law that keeps the new drug from being illegal.

M. LaPlante
5,0 van 5 sterren Fascinating look into money gone mad
30 juni 2014 - Gepubliceerd op Amazon.com
Geverifieerde aankoop
By the end of the twentieth century corruption was widespread among the ranks of Wall Street stock brokers, but there was a powerful force of change on the horizon: technology. In Dark Pools, author Scott Patterson shares the story of how computers would come to upend the old guard of the stock exchanges and transform the markets in fantastic, and often unpredictable, ways.

Wall Street: The place where our 401ks and pension funds go, which we should all probably understand better than we actually do. Despite what could be called, at best, amateur interests in the world of trading, I couldn't put this book down. While by no means a deep technical work, Dark Pools still proved highly educational, offering a lot of insight into the inner workings of today's stock market. Fortunately, Patterson presents the material in a way that's eminently accessible, even for those without a Wall Street Journal subscription. Discovering not just how the market is, but how it came into its current form, was eye opening.

Dark Pools isn't just about the markets, however. It's also a testament to the raw power of computing and its ability to change the way we work in just a few years time. I expected the book to cover some hyper-modern trends like high frequency trading. What I didn't anticipate was a beautiful and inspirational story about a few gifted individuals employing computers to revolutionize the world of finance. As it turns out, one 20-something young man working out of a tiny office near Wall Street actually built large portions of the high tech stock market we see around us today. Ever the idealist, he sought to beat the hordes of greedy and self-serving market makers at their own game, using little more than a closet full of computers and his brain. And in many ways, he succeeded. But the story doesn't end there; this new technology would eventually take on a life of its own, growing and evolving at fantastic pace. Millions and billions would be made and lost in seconds. And it's still going on, all around us. Some say it's out of control.

I thoroughly recommend Dark Pools to anyone with even a passing interest in the stock market or the development of technology. It's an eye-opener on the state of our national finances on one hand, and a testament to the power of man and machine on the other.
Meer lezen
8 mensen vonden dit nuttig
Vertaal recensie in het Nederlands

Mark Warren
4,0 van 5 sterren Race to the bottom
14 januari 2017 - Gepubliceerd op Amazon.com
Geverifieerde aankoop
This is really a series of stories of several of the key players in the development of high frequency trading. It all started innocently enough trying to reduce the time and amount of paperwork it took to make a trade. In addition, it also attacked the arbitrary gaps in pricing that increased the margins of the old line Wall Street firms.
Greed took over as a way to make money through high frequency trading. Ironically, there was a race to the bottom with faster and faster trades that rely on smaller and smaller margins. The real losers are the millions of people that relied on investing for their retirements. With more than 50% of the trades being executed by the HFT, what would have been compounded growth to build a retirement nest egg is going into the fastest traders with the best game plans.
If you read Flash Boys, this is a great book to augment the picture of HST.
Meer lezen
3 mensen vonden dit nuttig
Vertaal recensie in het Nederlands
Ga naar Amazon.com om alle 228 recensies te bekijken 4,5 van 5 sterren
Terug naar boven
Over ons
Verkoop bij ons
We helpen je graag
© 1996-2020, Amazon.com, Inc. en dochterondernemingen