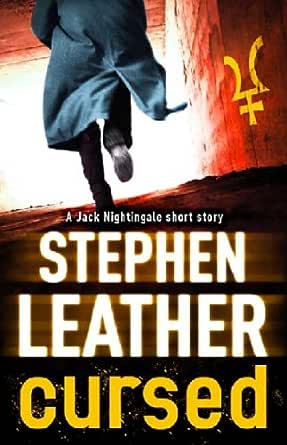 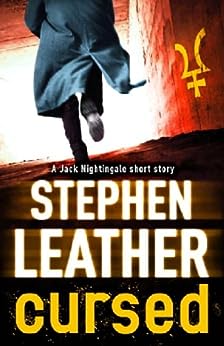 An exciting short story, part of the Jack Nightingale series by bestselling author Stephen Leather - thrillers with an occult twist.

Jack Nightingale - lives in the shadows, fights in the dark.

Ex-cop turned private eye Jack Nightingale is used to dealing with tricky situations. He's faced down the powers of hell a couple of times, too. In this new short story, he's called in to help a policeman who's lying at death's door. The doctors can't work out what's wrong. But the dying man's colleagues swear blind that he was cursed by a gypsy during the Dale Farm clearance. And Nightingale could be his only hope.

Jack Nightingale is the hero of Stephen Leather's supernatural detective novels. There are five books in the critically acclaimed series: NIGHTFALL, MIDNIGHT, NIGHTMARE, NIGHTSHADE and LASTNIGHT.

James Tepper
5,0 van 5 sterren The very first Jack Nightingale appearance in print (?)
5 november 2015 - Gepubliceerd op Amazon.com
Geverifieerde aankoop
CURSED is the latest Jack Nightingale short story that I read. I am a huge fan of Stephen Leather's series of 6 Jack Nightingale novels and it was not until I finished them that I found out that there were a number of short stories. As far as I can tell, CURSED was Jack's first appearance in print, with this late 2011 short story preceding publication of the first Jack Nightingale novel, NIGHTFALLL, by almost half a year. Nevertheless several of the characters who have become mainstays of the novels are here and in fine form: Wiccan and Black Magic advisor Mrs. Steadman, Jenny, Robbie Hoyle and Superintendent Chalmers all put in appearances. Regarding the time line of the novels and short stories, Jack would say "It's complicated". Regardless of publication date according to Amazon, CURSED has to to take place somewhere well after NIGHTFALL, because Jack has already become something of an adept at the Black Arts.

In this 60 page short story, Superintendent Chalmers calls on frenemy Jack (a former cop himself - see NIGHTFALL) to help one of his policemen who suffers from some sort of undiagnosable skin illness after attempting to evict a group of gypsies from camping illegally on private land. Jack investigates and finds evidence that the man has been cursed by an old gypsy woman, and goes about trying to help in his own inimitable fashion. The writing, plotting and pacing are all near-perfect as they are for just about all the Stephen Leather Jack Nightingale novels and shorts

Ken T
4,0 van 5 sterren Cursed: A Short Story
21 mei 2018 - Gepubliceerd op Amazon.com
Geverifieerde aankoop
Given this being a short story, Stephen Leather does very well in writing it and in character development. The plot revolves around voodoo, not exactly my favorite. The story keeps moving without any flat spots or voids. Though the story isn’t my cup of tea; the book is well done.
One thing: halfway through the Kindle edition the book finishes and there’s a long introduction to another of Leather’s works.
Meer lezen
Vertaal recensie in het Nederlands

Lillian
4,0 van 5 sterren Curses again
16 december 2017 - Gepubliceerd op Amazon.com
Geverifieerde aankoop
Love Jack Nightingale he might use the grey side of the law but he does get the job done. He has been given the task of trying to save a cop's life after he was cursed. Jack knows that he can't find the cure he will lose whatever friends he still has on the force. Jack just hopes that he can be on time and find the old woman before it is too late.
A great thriller.
Meer lezen
Vertaal recensie in het Nederlands

Cheryl
5,0 van 5 sterren Loved it!
12 april 2015 - Gepubliceerd op Amazon.com
Geverifieerde aankoop
This is my first book by this author and I loved it. I will definitely read more of his. I enjoy "other worldly topics" and I enjoy mystery, suspense and suspense. I expect I will find some of each in the next books I read of his.
Meer lezen
Vertaal recensie in het Nederlands