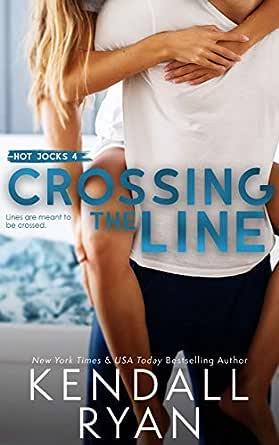 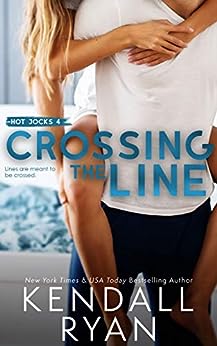 "Sweet and sexy with a delicious side of hot and dirty. Kendall Ryan pens another swoon worthy hockey hero who will undoubtedly melt your heart. - Helena Hunting New York Times bestselling author ⭐⭐⭐⭐⭐

Recovering from a pulled groin muscle isn’t exactly how I planned to spend my much-needed summer vacation. But being nursed back to health by my gorgeous friend Bailey, who’s just graduated from medical school, doesn’t exactly sound like a hardship.

We spend a week together at my family’s beach house, a week of swimming and barbecues, a week of entertaining my little cousins and sleeping right across the hall from each other. A week of watching Bailey grow closer with my mom and sisters, and my wacky but lovable grandma. A week of enjoying Bailey tending to me—which is saying something, because it involves a lot of shoving ice packs into my underwear and taping up sore muscles.

She’s funny and kind, and after just being myself for the first time in a long time, I find my walls come tumbling down. But when Bailey says she’s not looking for a relationship, I’m bound and determined to be more than just the fun hookup who sprained his groin a second time—this time with her.

Your favorite hot jocks are back with an all-new standalone novel. If you like sexy, confident men who know how to handle a stick (on and off the ice), and smart women who are strong enough to keep all those big egos in check, this series is for you!

(Books can be enjoyed in any order.)

You could say that I’ve been ALL IN with Kendall Ryan’s Hot Jocks series. From Justin and Elise in Playing for Keeps to Owen and Becca in All the Way to Teddy and Sara in Trying to Score, I’ve read them all (as an aside, to date, Owen and Becca own my heart). And through this all, I’ve fallen further into Ryan’s world of hockey superstars and their sassy, intelligent heroines. There is something here for everyone in this series: best friend’s sister, second chance, friends to lovers, etc. Through all of them, I’ve celebrated their highs and mourned their lows, falling into their stories and their romances. Kendall Ryan’s newest book, Crossing the Line, is no different. It is more of what you love about Ryan’s storytelling: great dialogue, off-the-page chemistry, $exy hero, and sassy heroine. In this book, all of this is wrapped in the cover of a friends-to-lovers story. If you’re like me, and you’ve read this series, then you will absolutely love Asher and Bailey’s story, and here’s why:

*For one, this book gives us a bit of a break from the hockey world. In this story, we are treated to a getaway to Asher’s grandmother’s home in San Diego. For this California girl, I love when my home state is featured. It reminds me of everything I love about where I live, and Ryan chose one of my favorite places. Since this is set in a beach city, we get Asher and Bailey in swim gear, which is chemistry gold. Both of them are instantly attracted to each other physically. That’s easy in this story; that’s Ryan’s capital in this book.

*Because Asher and Bailey are easily attracted to each other, the central struggle with this pair is crossing the line of friendship and professionalism. To be honest, though, I struggled with the depth of that line. I think the worry about professionalism is insignificant since Bailey isn’t really Asher’s nurse or doctor; instead, she is his friend with some nursing skills that help him. The line, then, is clearly friend-related, but even this isn’t a huge imposition. Their friends have waited for these two to acknowledge their interest, and they are hugely supportive of it. The challenge of this romance lies in Bailey’s ambitious life. That is where the angst of this story resides, and the best part of Ryan is she doesn’t make us work too hard through it. She presents it as the tension of the story, but she relieves us of it fairly quickly, which means most of this story allows us to enjoy these two falling for each other. They are funny together; they are comfortable with each other; and they grow more respectful of each other. This makes Crossing the Line equal parts sweet and $exy.

*Asher’s family is another key component of Ryan’s story. I love it when grandmothers and grandfathers play a part in matchmaking. Ryan builds the character of Asher’s grandmother so well that you find yourself laughing at her one moment and wishing for a hug from her in the next. Ryan’s use of Asher’s family becomes a huge part of Asher and Bailey’s relationship growth. Without them, these two would still be docked. Instead, his family offers Bailey opportunities to see Asher as something more than her casual hockey-player friend. It humanizes him in her eyes, and this becomes the foundation for their romance. It’s a key quality of Ryan’s story, and she shows her storytelling prowess here.

Kendall Ryan’s Crossing the Line is more of what you love about her Hot Jocks series. In fact, in my mind, it’s tied for second place with Playing for Keeps behind Owen and Becca’s All the Way. Where Justin and Elise are salty together, Asher and Baily are sweet, a nice dessert in the Hot Jocks series. If you’re a fan of hot hockey players and the strong, intelligent women who fall for them, then you want to read this series, and Asher and Bailey have definitely left their mark in it.

Crossing the Line is the fourth book in Kendall Ryan's Hot Jocks series and while this is part of a series, all of the books can be read as stand alone's. With that said, you should consider reading them all because this is one fun group of "hot jocks"!

Asher is recovering from both a concussion and a groin strain that he got in one of the teams latest games. Bailey is just about to enter her residency to finish up her studies to become a doctor. Asher and Bailey are part of the same friend group and have spent plenty of time together, but not a whole lot of one-on-one time, however that is about to change.

Asher has a family reunion that he'd like to attend, but the team says he has to take a nurse and he is not about to take a stranger to his grandma's house. When Bailey offers to go, she figures she can help take care of her friend and also get a free trip to sunny California.

What ends up unfolding in California is super entertaining. Not only are Asher and Bailey fighting the feelings they are beginning to have for one another, but Asher's grandma, mom and sisters are also getting in on trying to get the two together. Asher is absolutely awesome. He's sweet, attentive, and not to mention swoonworthy as all get out. Bailey gets to see a different side of him as he spends time with his little nieces. Bailey is not only smart, determined and intelligent, but she's also falling in love with Asher's family!

The question is, once the week is over and they go back to "real life" will they be a couple or was this just a quick vacation hook-up?

I loved this book and how it all played out. It was a so fun to have all of Asher's family be such a part of the story and his grandma and her special juice made me smile. Do yourself a favor and pick up this really entertaining tale!
Meer lezen
58 mensen vonden dit nuttig
Vertaal recensie in het Nederlands

Danielle
5,0 van 5 sterren 5 STARS! Sweet, swoony and sexy!
20 januari 2020 - Gepubliceerd op Amazon.com
Geverifieerde aankoop
I am loving Kendall Ryan’s Hot Jocks series so much! Each book has been fresh, fun, original and sexy, and I can’t get enough of these hockey players and their feisty women! The friends-to-lovers trope is a favorite of mine, and Ryan has been combining that theme in these hockey romances with tremendous success.

Asher is sidelined with a few injuries while the rest of the team heads into the playoffs. He wants to head home for a family reunion, but the team requires that a nurse travel with him to oversee his care. In steps recent medical school graduate and his friend, Bailey, who after four years of medical school and on the cusp of starting her residency, could really use a vacation. Heading to southern California to hole up at Asher’s family’s beach house sounds good to her.