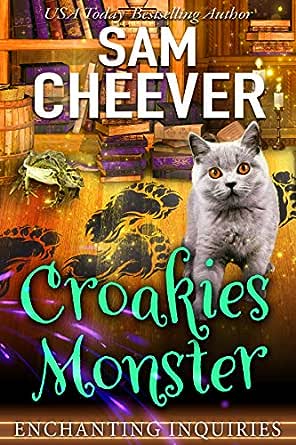 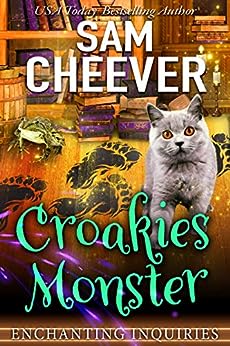 Ancient Chinese proverb says, give cat mouse and give frog fly, they'll soothe your monsters so you won't die.

Okay, maybe I just made that up. But I'll try anything at this point.

Croakies is suddenly being overrun by monsters. Yeah. Monsters. And I have no clue where they’re coming from. Are they tied to something we’ve done in the past? Do they have anything to do with the strange phone calls I’ve been getting from a really prickly local author? Most importantly, how are we going to explain to the humans about the appearance of a certain giantnormous blue monster flinging car-sized cookies around? Where did all these squirrel squattin’ songbirds come from?
And, for the love of the goddess’s favorite spanks, why is there ice all over the floor?

The frog and the cat? Yeah, they’re really pretty useless on this one. But at least they’re living the good life thanks to my tireless efforts to feed, house, and clean up after them and their naughty friend Hobs.

Mega monster boogers! This magic wrangling gig is for the birds. And the frogs. And the cats. And the hobgoblins. And, apparently, for the monsters hiding at Croakies.

VALERIE I.
5,0 van 5 sterren Monsters of all shapes and sizes! Sam Cheever is brilliant!
21 februari 2020 - Gepubliceerd op Amazon.com
Geverifieerde aankoop
I am so absorbed by this series. Each book gets better, more intense and completely capable of drawing you in and not letting go until the very end! Will they find the source of the monster invasion? Will they be able to fix the problem? Will everyone survive???? This book is like a thrill ride throwing you wildly around twists and curves, ups and downs and just when you think you have a minute to catch your breath, BOOM!!!! I'm exhausted!! I've preordered the next book in the series! In the meantime, I need a nap...and a big chocolate brownie with fudge frosting with a cup of tea and maybe some ice cream! Ribbit!
Meer lezen
Vertaal recensie in het Nederlands

krt1168
5,0 van 5 sterren Magic goes wild in this installment.
15 maart 2020 - Gepubliceerd op Amazon.com
Geverifieerde aankoop
Can the Keeper close off the void and block the monsters from coming through and destroying Croakies and will all her friends survive?

Nadia has her hands full when monsters keep showing up. She learns that her recent trip into Plex caused a rift that allows worsening monsters through. Also, the retrieval orders are exploding in number threatening to bury her and her assistant under paperwork and keep them from getting much needed rest.

This book brings the magical creatures from previous books back to help Nadia, but at what cost? I enjoyed the book and look forward to the next installment.

Dorothy S.
5,0 van 5 sterren A Mystery of Monsters
21 februari 2020 - Gepubliceerd op Amazon.com
Geverifieerde aankoop
Naida has real problems, with random ice patches, Council annoyances, and reports of malevolent monsters loose in Enchanted. Grym and Naida’s friends must join together with her to figure this puzzle out. Sam Cheever has created an exciting and humorous addition to Enchanting Inquires. I recommend the entire series.

DANA PRATT
5,0 van 5 sterren Monsters, Store wrecking and Mean wizards
10 maart 2020 - Gepubliceerd op Amazon.com
Geverifieerde aankoop
Naida will do anything to help her friends- even going into the abyss of Plex to do so. And this time , she has a new ally, a member of the Societe of Dire Magic called Archibald. Grym, Sebille, Sadie, Mr Slimy and Hobs are star helpers against the evil that attacks the town of Enchanted.
Meer lezen
Vertaal recensie in het Nederlands