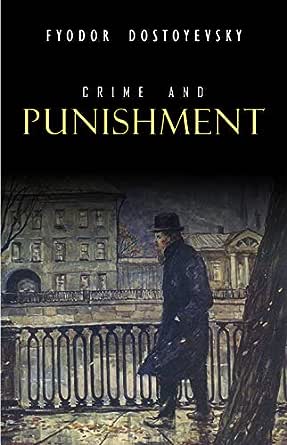 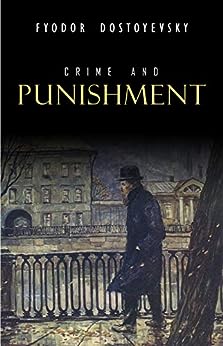 Through the story of the brilliant but conflicted young Raskolnikov and the murder he commits, Fyodor Dostoyevsky explores the theme of redemption through suffering. “Crime and Punishment” put Dostoyevsky at the forefront of Russian writers when it appeared in 1866 and is now one of the most famous and influential novels in world literature.
The poverty-stricken Raskolnikov, a talented student, devises a theory about extraordinary men being above the law, since in their brilliance they think “new thoughts” and so contribute to society. He then sets out to prove his theory by murdering a vile, cynical old pawnbroker and her sister. The act brings Raskolnikov into contact with his own buried conscience and with two characters — the deeply religious Sonia, who has endured great suffering, and Porfiry, the intelligent and discerning official who is charged with investigating the murder — both of whom compel Raskolnikov to feel the split in his nature. Dostoyevsky provides readers with a suspenseful, penetrating psychological analysis that goes beyond the crime — which in the course of the novel demands drastic punishment — to reveal something about the human condition: The more we intellectualize, the more imprisoned we become.
click to open popover

Hande Z
5,0 van 5 sterren Get Ready
12 augustus 2015 - Gepubliceerd op Amazon.com
The two popular translations of ‘Crime and Punishment’ before the 1993 translation by Richard Pevear and Larissa Volokhonsky, were by Constance Garnett and David McDuff. The Pevear/Volokhonsky translation became my favourite – until Oliver Ready’s translation came along. Not knowing a word of Russian, I declare my favourite only by the enjoyment I derived from reading the book in English.

Many things may indeed be lost in translation, and many others get misrepresented but we may not know. The result of reading only the English versions is that one’s choice is largely subjective. Compared to the Garnett version, the Pevear/Volokhonsky translation seems very modern – until Ready’s came along. Little things like changing ‘had not’ to ‘hadn’t’ renders Ready’s version not only a little more modern but also more informal. That is not to say that the atmosphere of old Russia is lost. Ready uses ‘fibs’ for ‘lies’ (Pevear/Volokhonsky) in one passage.

Ultimately, the reader has to decide for himself which style he enjoys more. Here is a comparison from one of my favourite passages (there are many) from the book. I set out first the Pevear/Volokhonsky version then the Ready version:
“What do you think?” Razmumikhin shouted, raising his voice even more. “You think it’s because they’re lying? Nonsense! I like it when people lie! Lying is man’s only privilege over all other organisms. If you lie- you get to the truth! Lying is what makes me a man. Not one truth has ever been reached without lying fourteen times or so, maybe a hundred and fourteen, and that’s honourable in its way; well, but we can’t even lie with our minds! Lie to me, but in your own way, and I’ll kiss you for it. Lying in one’s own way is almost better than telling the truth in someone else’s way; in the first case you’re a man, and in the second – no better than a bird. The truth won’t go away, but life can be nailed shut; there are examples. (Pevear/Volokhonsky)

‘Now what are you thinking?’ cried Razumikhin, raising even more. ‘That it’s their lies I can’t stand? Nonsense! I like it when people lie. Telling lies is humanity’s sole privilege over other organism. Keep fibbing and you’ll end up with the truth! I’m only human because I lie. No truth’s ever been discovered without fourteen fibs along the way, if not one hundred and fourteen, and there’s honour in that. But our lies aren’t even our own! Lie to me by all means, but make sure it’s your own, and then I’ll kiss you. After all, lies of your own are almost better than someone else’s truth: in the first case you’re human; in the second you’re just a bird! The truth won’t run away, but life just might – wouldn’t be the first time.

Ready’s version has a table of chronological events and a fresh, inspiring introduction that will help the first-time reader understand and appreciate the context of ‘Crime and Punishment’

VA Duck
5,0 van 5 sterren A Favorite
28 oktober 2017 - Gepubliceerd op Amazon.com
Geverifieerde aankoop
This is Dostoyevski at his best - at least as far as this reader is concerned. This is a ‘complex’ story (in many respects) certainly with respect to the storyline: and, in the ‘typical’ Russian style, full of boiling emotion, honor, degradation and mystery. Rodion Romanovitch Raskolnikov, a young college drop-out, given to dark mood and brooding temperament sulks in his cramped, stuffy, oppressive little boarding house room and plans a murder. He has earlier published a pseudo-intellectual essay in which he postulates the ‘right’ of an ‘extraordinary’ person to even commit crime in the pursuit of a greater good. This ‘philosophy’ shared with the reader seems always in one way or another at the base of Rodion Romanovitch’s brooding conclusion:

The storyline twists and turns and interleaves a series of characters that include the pathetic, the deceitful, the honorable, and the utterly hopeless. Dostoyevski makes the depth of the read much greater than the storyline itself, however. Raskolnikov is positively tortured within his own mind by the plan for murder, by the murder itself and by his pursuit by the predatory Investigating lawyer - Porfiry Petrovich. The writing amazes with its precision in describing the ebb and flood of emotion, scheming and shame that torment Raskolnikov. And, as usual in his novels, Dostoyevski explores the philosophical implications of good and bad, afterlife or darkness, and human consequence related to an interconnected universe. An old-fashioned Epilog ends the read giving the reader some 'closure' on Rodion and some moral 'conclusion' for Dostoyevski. Over 150 years old and still this book sets the high end for 5-stars.