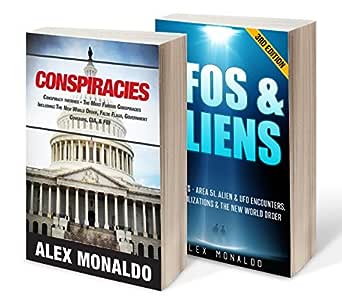 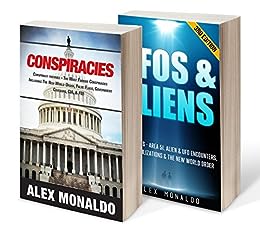 This book has 20+ conspiracy theories that all get to the bottom of what really happened. Don’t trust the mass media? The book is purposely written to give you an eye-opening experience and encourage you to change your perspective regarding current explanations of popular events that had a huge impact on mankind.

Are you fascinated by the unknown? Have you seen a UFO? Do you want to know the truth about alien encounters?

Learn what aliens are, what the Roswell UFO incident was, and how the UFO controversy began. You’ll also discover what Area 51 is — and why “ufologists” are so fascinated with this secretive facility. Read about the portrayal of aliens in pop culture, the ancient spiritual connections between religion and aliens, and the answers to many unanswered questions about alien hieroglyphics on Mars!

Both titles written By Alex Monaldo

This was a bundled offer I was eager to sit down and sink my teeth into with a pot of coffee close by! All 21 and 14 chapters respectively provided the reader with an ample supply of ideas to ponder over; this is one of those books in which the highlighting feature in my Kindle received a good work-out.

Many interesting points of view concerning what has been called the New World Order and the Iluminati are discussed right away, and the concerns have a number of people on high alert around the globe. Most of them have even been conversation topics within my own circle of friends. While it might seem like a valid attempt for certain people to overtake the world political scene, I would like to point out another fact. The Bible states at Daniel 2:44 that God's government would end all earthly rulership once and for all, being the only government for all time. So while it's entirely possible that all these famous, wealthy and highly influential people just might be attempting to overtake the world political scene ... it will never happen.

As far as the Iluminati is concerned, it is my personal opinion that it does exist and operates a large amount of cash flow around the globe. With large amounts of cash flow comes a measure of power. One of the tidbits the author brings out is a simple episode of a popular cartoon that I am even a fan of: Johnny Bravo. What has Johnny Bravo got to do with the Iluminati? The author suggests viewing an April 2001 episode  entitled, “Chain Gang Johnny”. It's available on YouTube; I checked it out myself. A movie poster is shown of the Twin Towers in flames with the words “Coming Soon”. You be the judge on this one.

The moon landing (or not), Area 51, the Roswell weather balloon. The Bermuda Triangle, Atlantis, the Twin Towers and of course - the silent overtaking of the Reptilian Elite. We've all read the stories. What's your take on them?

The author states this book was written with the person in mind who still remains on the proverbial fence when trying to decide whether or not the human race has, indeed, been visited by ... other life forms.

The pages in this book, to a certain degree, mirror the first book in this bundled set - but does also include other material, such as crop circles, eyewitness accounts and a group I had never even heard of, referred to as Majestic 12.

Another interesting topic I actually recommend checking out if you're not already familiar with it, is Another unusual megalithic structure that puzzles the mind has to be the Saksaywaman fortress in Peru. The author does a good job explaining it, but if you do some more research on your own, the archaeological part is a pretty fascinating subject.

In addition to discussing two of my very favorite subjects, author Alex Monaldo delivers a thoughtful, thought-provoking, and reasoned explication, leavening with subtle humor. His approach is kin to sitting down to a face-to-face conversation between author and reader. Additionally, I appreciate his emphasis on keeping an open mind and on researching for oneself.

Review of CONSPIRACY by Alex Monaldo

The author is at great pains to insist that readers use critical thinking when examining not only "conspiracy theories," but also in regard to any information presented as fact, including mainstream media. He reports quite a number of different theories, from the "logical" to the "farfetched." Altogether, this book offers a reasonable examination and a starting point for investigating various "conspiracy theories."

This is a delightful "walk-through" the subject, with a constant emphasis on the actual dearth of evidence either for or against extraterrestrial existence. The author reiterates the importance of maintaining an open mind, and guides readers through the history of "alien encounters" and "unidentified flying objects."
Meer lezen
Vertaal recensie in het Nederlands

Samjela Peter
4,0 van 5 sterren Skeptical ideas about world events
21 december 2019 - Gepubliceerd op Amazon.com
Geverifieerde aankoop
With a little knowledge about world events in the past , present and possible future,I deeply contemplate on it; even though I am some how skeptical due to lack of firm evidences,it is worth reading and forming my own opinion.
Meer lezen
Vertaal recensie in het Nederlands

Stainless Steel
5,0 van 5 sterren Intriguing read
26 september 2017 - Gepubliceerd op Amazon.com
Geverifieerde aankoop
Intriguing read. Some of the conspiracies I found amusing, while others were nothing short of enlightening. As for the UFOs book, even though I do not believe in aliens much, it was fun to read about certain "discoveries" and theories people over the centuries have come up with. All in all, a good bundle.
Meer lezen
Vertaal recensie in het Nederlands