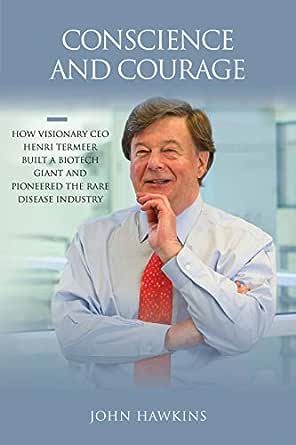 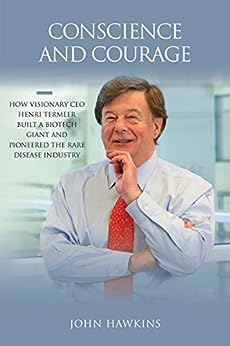 Henri Termeer was one of the first of a pioneering group of business executives who built a disparate group of fledgling companies into a biotech industry that has driven decades of therapeutic innovation. During a 28-year career at Genzyme, including 26 years as CEO, he created a process of drug development that for the first time was patient-centered. He also helped forge biotech's public policy agenda and inspired a generation of entrepreneurs to take on large and important challenges. An extraordinary number of today's biotech leaders were directly mentored by Termeer. His own leadership was iconoclastic: He broke rules and took risks, setting ambitious goals and finding novel ways to reach them. In doing so he transformed an industry and brought hope to patients with a range of diseases previously deemed too rare to justify the investment needed to support the development of specific therapies. In Conscience and Courage, John Hawkins, an insightful analyst of healthcare leaders, reveals the philosophy, principles, methods, and habits of a prominent and successful CEO who defied convention to create an investor-owned global enterprise that put people before profits and improved the lives of thousands of forgotten patients.
click to open popover

Marie W.
5,0 van 5 sterren Pioneer and visionary
9 november 2019 - Gepubliceerd op Amazon.com
John Hawkins brought to life the soul of Henri Termeer and his journey from the Netherlands to Genzyme. This biotech giant had a committment to his patients, colleagues and all those who he interacted with. Conscience and Courage should be read by those in the business and the biotech industry on a "how to' regarding principals, philosophy and buildidng successful leaders. Thank you Mr. Hawkins for sharing Henri with all of us.
Meer lezen
Vertaal recensie in het Nederlands
Ga naar Amazon.com om alle 2 recensies te bekijken 5,0 van 5 sterren
Terug naar boven
Over ons
Verkoop bij ons
We helpen je graag
© 1996-2020, Amazon.com, Inc. en dochterondernemingen