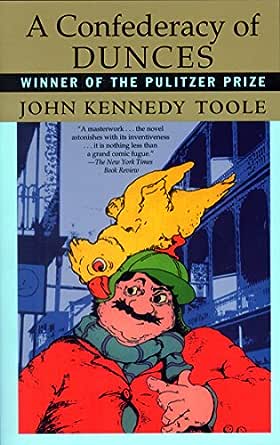 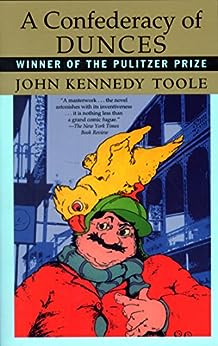 John Kennedy Toole was born in New Orleans in 1937 and died in 1969. After graduating from Tulane University, he received a master's degree from Columbia University and taught at Hunter College, the University of Southwestern Louisiana, and Dominican College. Much of the first draft of A Confederacy of Dunces was written while he was in the army, stationed in Puerto Rico and teaching English to new recruits.

[Toole's] novel is a parade of victorious laughter, just like those famous jazz funerals in New Orleans.--The Millions

Crazy magnificent once-in-a-blue-moon first novel. . . . There is a touch of genius about Toole and what he has created.--Publishers Weekly

One of the funniest books ever written . . . it will make you laugh out lough till your belly aches and your eyes water.--The New Republic

One of the most revered comic works in the modern canon.--Slate

To the charms of John Kennedy Toole's A Confederacy of Dunces, I succumbed, stunned and seduced, page after page, vocal with delight. . . . A pungent work of slapstick, satire, and intellectual incongruities.--New York Times

When Walker Percy penned these prophetic words in his foreword to the first edition of A Confederacy of Dunces, he could not have known just how wide Toole's "world of readers" would become. Released by Louisiana State University Press in April 1980, A Confederacy of Dunces is nothing short of a publishing phenomenon. Turned down by countless publishers and submitted by the author's mother years after his suicide, the book won the 1981 Pulitzer Prize for Fiction. Today, there are over 1,500,000 copies in print worldwide in eighteen languages.

Toole's lunatic and sage novel introduces one of the most memorable characters in American literature, Ignatius Reilly, whom Percy dubs "slob extraordinary, a mad Oliver Hardy, a fat Don Quixote, a perverse Thomas Aquinas rolled into one -- who is in violent revolt against the entire modern age". Ignatius' ire explodes when his mother backs her car into another automobile. The owner of the damaged vehicle insists on payment; Mrs. Reilly demands that her son cease watching television and writing in his Big Chief tablet and get a job.

Set in New Orleans, A Confederacy of Dunces outswifts Swift, one of whose essays gives the book its title. As its characters burst into life, they leave the region and literature forever changed by their presences -- Ignatius and his mother; Miss Trixie, the octogenarian assistant accountant at Levy Pants; inept, wan Patrolman Mancuso; Darlene, the Bourbon Street stripper with a penchant for poultry; Jones, the jivecat in space-age dark glasses. Satire and farce animate A Confederacy of Dunces; tragic awareness ennobles it.

Louisiana State University Press celebrates A Confederacy of Dunces' twentieth year withthis anniversary edition, which includes a new introduction by Andrei Codrescu that examines the relationship of this modern-day classic to the city whose pulse it so brilliantly captures.

Fere Nemo
5,0 van 5 sterren "His Royal Malignancy"
28 februari 2017 - Gepubliceerd op Amazon.com
Geverifieerde aankoop
When critics say Confederacy is not true-to-life because it's full of despicable characters; unlikely situations; and plot-holes, I have to wonder what kind of lives they have---because that's a near perfect description of mine. JKT is (was) a master at turn-of-phrase with a gift for writing large the theater-of-the-absurd, but that's not really why I love this book so much.

I re-read aCoD every three to five years for a "humility tune up." The book is a highly polished soul mirror that's a lot more true-to-life than most people want it to be. Ignatius, or "His Royal Malignancy" as I like to call him, is the central character, and an extreme example of an arrogant bastard with absolutely nothing to be arrogant about, but the whole book is like a case study for John Calvin's doctrine of total depravity; everyone in it is---to some degree--indelibly screwed up. I suspect this is why so many people hate this book. At some point they see themselves here and realize that the depth of their own depravity is invariably greater than they suspected, realized, or certainly would ever have cared to admit.

If you love Ignatius J. Reilly, there is probably something really wrong with you, but if you hate him---there definitely is. Either way, you're doomed.
Meer lezen
188 mensen vonden dit nuttig
Vertaal recensie in het Nederlands

Bernie Gourley
5,0 van 5 sterren The adventures of a verbose and lazy man-child forced to get off his duff and get a job
16 oktober 2017 - Gepubliceerd op Amazon.com
Geverifieerde aankoop
If you’ve heard of this book, but not read it, you’re probably aware of the troubled circumstance of its publication. Several years after having failed to be published, Toole committed suicide. The story of the book would have ended there, except Toole’s mother found the typescript and carted it around to people in the literary community. After much persistence and not taking no for an answer, she managed to get Walker Percy to read the manuscript, and the rest is posthumous Pulitzer Prize winning history.

It would be easy to dismiss the editors involved in rejecting this manuscript as grade-A lunkheads, or as the lead character (Ignatius J. Reilly) likes to verbally skewer his victims “Mongoloids.” However, one can see how said lunkheads would find this much-beloved novel risky. It’s a character-driven novel in which the lead character is obnoxious and unlovable in the extreme. Reilly is a pretentious and pedantic professorial type--verbally speaking-- wrapped into the obese body of a man-child who is emotionally an ill-mannered five year old with a bombastic vocabulary. Reilly has no impulse control, takes no responsibility, and is prone to tantrums, sympathy-seeking dramatic displays, and wanton lies. He’s the worst because he thinks he’s better than everyone despite the fact that in all ways except his acerbic tongue, he’s worse than everyone.

That said, the book—like its unsympathetic lead character—is hilarious through and through. What it lacks in a taught story arc and a theme / moral argument (the latter being why the editor at Simon and Schuster rejected the book after showing initial interest in it) it more than makes up in hilarity.

I should point out that when I say that this isn’t a plot-driven book, it doesn’t mean that it doesn’t have an interesting wrap-up at the end—which I will not discuss to avoid spoiling it. The plot revolves around events in the life of a lazy man-child forced to go to work. It’s not a journey of change, discovery, or adventure. While, in most cases, a character-driven story with an unmalleable lead would be a recipe for a book that flops, here it keeps one reading to the last page because it’s Ignatius’s failure to become a better man that ensures the book is funny to the end. Reilly is constantly making decisions that are both overly contemplated and yet ill-considered.

The book follows Ignatius Reilly through an event that results in a tremendous loss of money for Ignatius’s mother. This forces her to finally put her foot down and insist the man—who she still thinks of as her little boy—get a job. It should be noted that Ignatius’s mother’s eventual coming around to the monster her son has become is a major driving force in the story—though we can see a distinct lack of taking of responsibility that echoes that of Ignatius, himself. Ignatius gets a fine—if lowly, clerical--job at the slowly-dying Levy Pants Company, but gets fired after he encourages a worker protest that goes awry. He then gets a job as a hotdog cart vendor—a job considered the lowest of the low by both his mother and New Orleans’ society-at-large. The latter is the job he has at the end when a final chain of events unfolds (not without tension and drama, I might add.)

On the theme issue, the Simon & Schuster editor was correct that the book isn’t really about anything except how to muddle through life as a lazy, cranky, emotionally-stunted, and overly-verbose doofus. (But he was oh-so wrong about that being a lethal deficit—according to the Pulitzer Prize committee as well as innumerable readers.)

I’d recommend this for any reader with a sense of humor. You won’t like Ignatius J. Reilly, but you’ll find his antics hilarious, and you’ll want to know what happens to him in the end even if he is irredeemable.
Meer lezen
73 mensen vonden dit nuttig
Vertaal recensie in het Nederlands

Amazon Customer
5,0 van 5 sterren My New Favorite Book!
14 oktober 2017 - Gepubliceerd op Amazon.com
Geverifieerde aankoop
What an amazing book! I had never heard of the book until I saw it on a co-workers desk. Read the story behind the book and was intrigued.
I was hooked from the first page. The book has a great flow to it with great evocative characters and wonderful dialogue. The book was written in 1963 so you have to remember it was a different world then. Helps to know a little about the social and political climate of that time period to put things in Perspective. Yes Ignatius is a jerk, but that's part of the beauty of this book.

I don't understand the negative reviews and the people that say they had to labor through it or couldn't finish it. I could not put this book down.
To me the mark of a great book is when you can't wait to steal away for even just a few minutes to read.
Easily one of the best books I have ever read if not THE best. I'm 54 and an avid reader so that says a lot.
Meer lezen
50 mensen vonden dit nuttig
Vertaal recensie in het Nederlands

HillyBilly
3,0 van 5 sterren Get ready to spend time with characters you hate
29 september 2017 - Gepubliceerd op Amazon.com
Geverifieerde aankoop
After hearing this book's title for decades, I approached it with a big appetite for laughs. After the first few pages, I had to challenge myself to figure out what human flaw, propensity, etc. the author was mocking and to what end. Surely the main character is ridiculous and loathsome, and for a while I really got into the different ways in which these characteristics were portrayed. But I kept wanting there to be some aspect of society--the American South, academia, repressed men-children, sensitive characters in a superficial culture, outsiders/radicals--that was either sympathetic or clearly not. I got impatient as I read how these same morons egged each other into ever more ludicrous situations, losing hope around page 250 that some counter-example, some relief was forthcoming. Everyone and everything remains twisted and pathetic, inching along in a world devoid of sense or caring. There's no denying the author had a stunning command of language and the ability to weave characters together through lively dialogue. But there are no lessons here, and the laughs are too dark and infrequent to make this an enjoyable read.
Meer lezen
30 mensen vonden dit nuttig
Vertaal recensie in het Nederlands