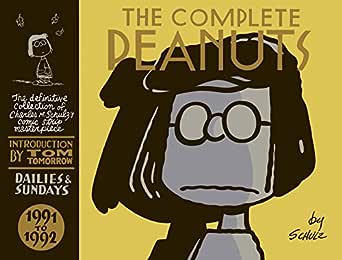 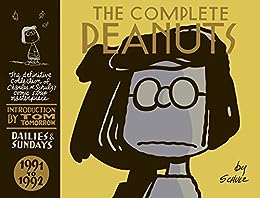 The Complete Peanuts: 1991-1992 is the 21st volume (of 25) of the perennial, best-selling series that collects every single one of the 18,000-plus Peanuts newspaper comic strips created by Charles M. Schulz, from its debut in 1950 to its end in 2000. In this volume, the series enters its homestretch as the strip enters its final decade: Schulz's cartooning has never looked more confident, and his sense of humor is unrestrained.
click to open popover

Timothy Haugh
5,0 van 5 sterren Great Stuff
21 augustus 2014 - Gepubliceerd op Amazon.com
Geverifieerde aankoop
Anyone who follows my reviews knows that I love the Peanuts comic strips. It only makes me sad to see how quickly we are coming to the end of this collection. Still, we must enjoy while we can, and this volume adds to that enjoyment.

We are well into the time, now, where I can remember reading these strips originally in the newspaper. In fact, two of the strips in this collection I cut out of the paper and still have taped to my computer—Snoopy as an author is always worthwhile. Additionally, Marcie has some great stuff here (“Great Grape” anyone?) and Rerun is still strapped to the back of his mother’s bicycle, helmet and all.

I have been following this collection from the beginning and intend to follow it to the end, which is (too) fast approaching. Though it becomes harder and harder to find new words to describe excellence, you can be sure I’ll keep trying to find them. Schulz deserves no less.

Norman A
5,0 van 5 sterren The Complete Peanuts volume
28 juni 2014 - Gepubliceerd op Amazon.com
Geverifieerde aankoop
I was still in elementary school when the Peanuts comic strip appeared in the newspapers (I was on schedule; didn't fail any grades). While there are many comic strips I like a lot, Peanuts is my favorite. I believe Charles Schulz achieved an enviable mix of great wisdom, a great sense of humor, and a wonderful drawing style. And, for the devoted fan, it's a very special thing to be able to see the progress and changes as they're captured in this wonderful series of books.

Like a breath of fresh air. I think that best captures, for me, the impact of the Peanuts strips for me on any given day. I would be hard-pressed to find one I didn't enjoy, if there is such a one.

I recommend them, one and all, very highly.
Meer lezen
Een iemand vond dit nuttig
Vertaal recensie in het Nederlands

annieb
5,0 van 5 sterren My final piece of the puzzle
20 februari 2018 - Gepubliceerd op Amazon.com
Geverifieerde aankoop
This was the finishing book to my collection of the entire Fantagraphics Peanuts series. As all the others, it's perfect.
Meer lezen
Vertaal recensie in het Nederlands

Farmer Jeanio
4,0 van 5 sterren A Treasure Trove for "Peanuts" Fans
13 maart 2016 - Gepubliceerd op Amazon.com
Geverifieerde aankoop
We love all the "Peanuts" gang, and are pleased to add this volume to our library. The book is small, but contains many treasures. I gave only four stars because the packaging was poor, and we had to repair the cover.
Meer lezen
Vertaal recensie in het Nederlands