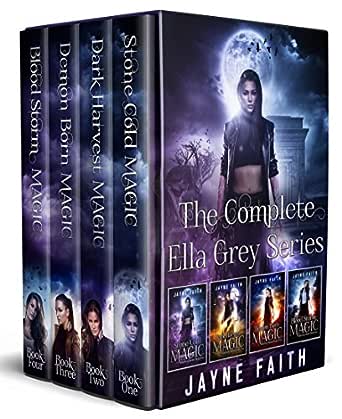 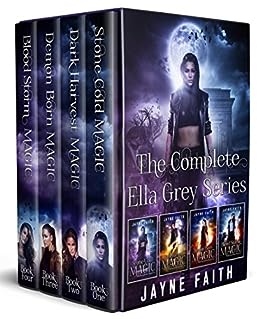 Something is eating Ella's soul . . .

Demon patrol officer Ella Grey was pronounced dead after an accident on the job. Eighteen minutes later, she woke up on a gurney bound for the morgue. But she didn’t return to the living alone. The soul of a reaper followed her back from the grave, and it’s not just along for the ride. The reaper gives her glimpses of the brother she feared was dead, but it's also trying to use her for its morbid work. The reaper could be her biggest ally in her battle for her brother, if it doesn't eat her soul first.

Love stories with magic, action, and danger? Download The Complete Ella Grey Series by Jayne Faith today and get lost in a supernatural world!
click to open popover

natalia
2,0 van 5 sterren A messy pile of disappointment
16 augustus 2019
Indeling: Kindle-editieGeverifieerde aankoop
So much buildup for very little pay off. The final fight is so short and awkward it’s almost funny. And then we cut back to author’s favorite family life and household interactions that are too boring to read in full. There are massive plot holes and issues throughout all books, getting significantly worse towards the end. Deus ex machina reigns, s*** gets solved in most improbable or silly ways to move the plot forward. Lots of characters we could do without.

In authors defense, it’s a cool world but it’s not shown by any decent storytelling, just described and overly explained using 1st person ramblings of the main character. I really wanted to like it, but I can’t.

Kallenda
1,0 van 5 sterren Main character is foolish to the point of irrationality
23 maart 2019 - Gepubliceerd op Amazon.com
Indeling: Kindle-editieGeverifieerde aankoop
The only good thing I can really say about these books is that at least the author can actually construct somewhat acceptable sentences - which, in an era when people can self publish without having any editing done, is an attribute I do appreciate. However, I was only able to force myself to read the 1st and 2nd book in the series, so that is what my review is based on.

A major issue that I have with this book is the...shortsightedness of the main character, Ella. She is a personification of the saying, "God" - in this case, the author - "favors fools and small children." Early in the first book, Ella is reliably informed that she has a supernatural parasite called a "reaper" eating her "soul", and that she should have it removed as soon as possible because it's rate of consumption cannot be predicted - it could consume her entirely at any time. However, since being afflicted with this parasite Ella has had a vision of her missing brother (whom she supposedly very much wants to find), and she assumes that the vision is truthful, although she cannot verify it. So she decides to keep the reaper in the hopes that it will reveal further information regarding her brother's location. Meanwhile, the reaper has taken over control of her body on a couple of occasions, attempted to consume a healer, successfully assaulted one of Ella's allies, and has not been the least bit forthcoming on her brothers whereabouts. And why would it be forthcoming? Because if she had any sense, she'd have it exorcized once she no longer needs its help finding her brother, and so she should realize that the reaper is not going to help her find her brother - that would be contrary to the reaper's best interests. Ella also discovers that although the reaper is supposed to be an "angel of death", freeing the souls of the dead from their bodies or their location of death, it has instead been collecting them for its personal gratification. Luckily for Ella, one of her friends has a device that allows him to read the precise volume of her soul - in percentages, no less. At the end of the second book, he informs her that she is down to 2%. Despite all this, she still will not have the reaper exorcized. (Also, I don't find it believable that someone could have the majority of one of their discrete parts consumed without having any symptoms, yet Ella seems to suffer no symptoms from the slow loss of her soul. For example, if you lost half a liter of blood, or an ounce of your liver, maybe you'd barely notice. But if you lost half of your blood or liver, you would suffer for it and be weakened. The more that's consumed, the more acute the symptoms would be, until you die.) Another point of evidence indicating her shortsightedness: in the 1st book, Ella has an encounter with a unethical witch who uses "verbal magic" to coerce Ella into agreeing to an open-ended favor, and despite having later realized that she's been coerced AND having received a warning about this particular witch from a friend, Ella takes no precautions against this "verbal magic" the next time she arranges to meet with this same witch. Another point: anyone who's not living under a rock knows entering a crime scene without proper preparation to prevent contaminating it can make the crime harder to solve. And if you're already under suspicion by the law, you're only digging yourself deeper by doing so. Yet Ella does indeed do this twice - once at the scene of a theft and once at the scene of a connected murder. Another point: after the first murder, (for which Ella is under suspicion) Ella somehow(?) draws the conclusion that the next victim will be her friend Deb. So, knowing nothing about the murderer's abilities or what kind of creature it is (in this world, the killer is not necessarily a human and can therefore not be assumed to likely fall within a certain range for strength and speed and intelligence and susceptibility) and having seemingly no physical combat training and, canonically, no significant magical combat training or magical power, she disguises herself as her friend, takes a couple of generic magical defensive items, and waits, alone, at her friends house for the killer. AND she feels confident enough of her ability to capture and restrain this creature that she intends to to hold and question it for a while before she turns it in. Speaking of, how does she intend to prove that the killer is indeed the guilty party when she turns him in? Does she think they'll take her word for it? Also, as a result of her arrest as the murder suspect, she's wearing a magical tracking device, which she's had circumvented (presumably illegally) for her little undercover mission. How does she intend to explain the fact that while the tracker was showing that she was taking a nap at home, she was actually at her friend's house capturing a alleged killer?
I could go on and on, but I ran out of space. Do not buy! Needs improvement & many beta readers.

RV
1,0 van 5 sterren I can’t make myself finish this
15 mei 2019 - Gepubliceerd op Amazon.com
Indeling: Kindle-editieGeverifieerde aankoop
The main character is a selfish, self centered moron. She keeps getting herself into life threatening situations, and pulling other people into the danger with her.

To top that off she’s keeping the reaper inside of her to help her find her brother. It doesn’t matter how much she continues to die inside. It doesn’t matter that she puts everyone she knows in danger over and over again. The only thing she cares about is what SHE wants. Everyone else can go hang I guess.

Somewhere in book two it got worse. Her so called best friend really isn’t one. The ‘friend’ knows the female lead is being forced to join. The ‘friend’ does want to join, so instead of trying to help the main character with her problem, she’s overjoyed that they’re going to be there together. Who needs enemies with a ‘friend’ like that.

The non-friend was the last straw on top of the lunacy of these stories. Which is really unfortunate since some of the ideas behind them were really good. They just need to be written by someone who can think about how stupid an idea is before writing it down.

DevourerofWorlds
2,0 van 5 sterren Needs improvement
28 juli 2019 - Gepubliceerd op Amazon.com
Indeling: Kindle-editieGeverifieerde aankoop
I hate leaving a two star review since the problem isn't that the author can't write. The craft is fine. There aren't too many typos. The characters seem to stay true to their personalities and are pretty well fleshed out. The plot behind the books is interesting, if filled with plot holes. Plot holes I could have probably forgiven, but the characters, especially the MC, were just so annoying that I found myself wanting to strangle the Kindle. Unfortunately the MC stayed true to her personality throughout all 4 books and never to seemed to grow emotionally, even though she eventually added magical abilities. Sometimes an author will deliberately hamstring a character so that they can have them grow in the succeeding books, but that was not the case here as I was hoping. The author has successfully created a believable character for someone who enjoys a job that requires average intelligence, limited ambition and creativity, limited magic, and a skill for doing routine boring jobs without worrying about the bigger picture. She was still rebellious and anti-social so was clearly never going to get promoted, but she seemed happy overall with the job. The problem is that the author wants that character to take on much bigger jobs and that is clearly not within the character's mental abilities or skill set. So then we are stuck with a "save the world" scenario over and over and an incompetent hero who always does whatever she wants no matter what anyone tells her, or what proof there might be that her ideas are unsound. Like her uncle's obsession with righting the wrong of creating the rips in the universe, she is obsessed with getting her brother back to the eclipse of everything else, and will sacrifice anything and anyone to achieve her goal. She is a (demon) animal control officer rather than a police officer and has very limited legal, magical, and military training, let alone education or legal authority, yet seems to believe that she is the best candidate for anything that needs to be done. On top of that, she has a Reaper eating her soul but decides to keep it because...you know, reasons. She seems surrounded by dishonest and manipulative people and the only person who does not fall into that category gets killed off in book 3. At the same time she has many opportunities to build up her own power base but can't be bothered to do so. I can't decide if the author has done this on purpose to show us how difficult it would be for a regular person to be thrust into power and glory if she didn't have the ability to step up, or if the author truly does not see this as an issue. Either way I kind of find myself rooting for the Reaper stuck in Ella Grey's body. After seeing the world through her eyes for 4 books, I want to eat her soul and be free too.
Meer lezen
2 mensen vonden dit nuttig
Vertaal recensie in het Nederlands
Ga naar Amazon.com om alle 71 recensies te bekijken 4,5 van 5 sterren
Terug naar boven
Over ons
Verkoop bij ons
We helpen je graag
© 1996-2020, Amazon.com, Inc. en dochterondernemingen