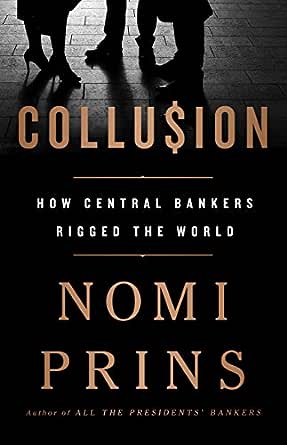 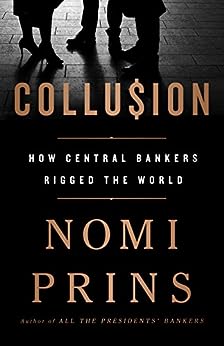 Nomi Prins is a journalist, speaker, respected TV and radio commentator, and former Wall Street executive. The author of six books, including All the Presidents' Bankers, Other People's Money, and It Takes a Pillage, her writing has been featured in the New York Times, Fortune, Mother Jones, Guardian, and Nation, among others. She was a member of Senator Bernie Sanders (D-VT) Federal Reserve Reform Advisory Council, and is on the advisory board of the whistle-blowing organization ExposeFacts. --Deze tekst verwijst naar een editie van deze titel die niet meer wordt gedrukt of niet beschikbaar is.

"Prins is that rare combination of real-world expertise, scholarly method, and a brilliant writing style. Collusion is urgent and timely. A must-read for savers, students, journalists, and public officials."--James Rickards, bestselling author of Currency Wars and The Death of Money

"After the 2008 economic collapse, central banks created $21 trillion of money to stave off a global depression. But who got all that new money? And how was it used? The always insightful Nomi Prins, after traveling the globe for answers, reveals the shocking truth-and she does it in plain English so everyone can understand the awful facts."--David Cay Johnston, bestselling author of It's Even Worse Than You Think

"Prins has emerged as one of the fiercest critics of crony capitalism and its sustained attacks against poor and working people. This is the book that the financial elites don't want you to read."--Jeremy Scahill, Academy Award-nominee, bestselling author of Blackwater, and cofounder of The Intercept

"Meet the Lords of Finance of the twenty-first century. Prins' in-depth reporting explores how central bankers' political aspirations came to supersede their duties to safeguard their economies. With few options, central bankers will become more desperate with hopes that more collusion will save the day. Read this book to understand how very wrong they are and to fully grasp the danger that lies in wait."--Danielle DiMartino Booth, author of Fed Up and former Federal Reserve advisor

"The US doesn't have a financial press. It has something better-Nomi Prins. Read this book to understand the central bank conspiracy against the world economy."--Paul Craig Roberts, former Wall Street Journal editor and assistant secretary of the US Treasury

"Central banks, led by the Federal Reserve, are the opioids for private banks addicted to being reckless with other people's money. Prins, drawing from her previous work in Wall Street firms and her present field research around the world, says, 'We are headed for another epic fall.' Taxpayers, workers and consumers who will suffer from another bailout, all better read this clear, concise, compelling book."--Ralph Nader

"Scarier than Stephen King horror fiction. Prins, a refugee from Goldman Sachs, tells the truth on her fellow banksters and their abuse of the scary uber-power they wield when they take control of money-printing machinery of the world's central banks. Astonishingly, she got deep inside these secretive power chambers-and came out alive with truly fascinating tales of the blood diamonds of global finance. I particularly enjoyed, if you can use that word, her exposure of the cruelty and cupidity of the banking potentates who suffocated Greece to please the gods of Markets and Mammon."--Greg Palast, author of The Best Democracy Money Can Buy

A somber, important warning that's likely to cause readers to wonder about the safety of their assets, if not fear for the near-term future.--Kirkus Reviews

"[An] unflinching, troubling exposé... well worth a close read by anyone looking to understand the roots of the last crash and prepare for the next."--Publishers Weekly

"Captivating... an exposé of the highest order - an all-inclusive and wide-ranging attempt to draw back the curtain and illuminate those who are truly pulling the strings controlling the progression of world events... Prins leaves virtually no stone unturned in this comprehensive and mesmerizing indictment... Prins is able to write with an authority virtually nonexistent - or certainly unrivaled - among her peers."--Bowling Green Daily News --Deze tekst verwijst naar een editie van deze titel die niet meer wordt gedrukt of niet beschikbaar is.
click to open popover

Mark Watson, CPA
5,0 van 5 sterren Just read or listen to Collusion - it will change your sense of The Matrix we live in.
6 mei 2018 - Gepubliceerd op Amazon.com
Geverifieerde aankoop
I just finished Nomi's book, Collusion. I worked for The Federal Reserve in various departments throughout my life, including payment processing, Treasury Direct, and as a bank holding company examiner. I do not mean to be histrionic here. I do not personally know Nomi. This is the most important book I've read in a decade. Take my advice just this once - get Collusion, and read it. And thanks, Nomi, for your bravery.
Meer lezen
115 mensen vonden dit nuttig
Vertaal recensie in het Nederlands

Rather than offer a summary, I'm going to offer a couple of quotes directly from the book that do well presenting the overall theme:

- "Nowhere in any of this did the plight of ordinary citizens meaningfully feature in the discussion." - p. 224

- "This coddling of the oppressors depicted the illogic of a situation that hurt all those involved to some degree - except the central bankers themselves. It was the central banking establishment that had no real allegiance to voters and that remained virtually untouchable." - p. 242

Basically, in 2007/2008, a fiscal crisis erupted, with the epicenter being the United States. This crisis was in part caused by the deregulation of the banking industry during the Clinton Administration, including the repeal of the Glass-Steigal act. Though many who have been following the system are aware of that, Prins gets into detail of why this is true. It lead to out of control "betting" utilizing people's deposits. This "betting" included subprime loans, derivative markets (including derivatives from toxic assets), and so on. When it all came to a head, the bankers went to governments to bail them out. And they did. And the banks made out big time but Main Street did not. And then central banks pushed money conjuring (QE) for a trickle down effect. It didn't work. Banks hoarded it and bet on more derivatives. So the central banks keep doing the same thing and have for about a decade with the same effect.

The author does a great job in presenting the elitism of the central bankers, the revolving door between banking positions and government positions, the fact that the bankers are less and less accountable to governments and that governments are more and more held hostage by those bankers. This book should be on the reading list for every college student out there, but it won't be.

Political Trigger Warning: The author does not speak highly of any American administration, whether it be Bush, Obama, or Trump. So if you are in love with any of these presidents, you will be triggered.
Meer lezen
107 mensen vonden dit nuttig
Vertaal recensie in het Nederlands

browngeoff
5,0 van 5 sterren Superb study of high finance
18 mei 2018 - Gepubliceerd op Amazon.com
Geverifieerde aankoop
This is a superb study on high finance. It shows in great detail how the world's central bankers have been colluding to prop up the world economy with easy money over the last 10 years. She makes a convincing argument that this strategy has failed to do anything but protect the interests of the super-rich. Reformists and revolutionaries alike will find this book a gold mine of information in their battle against a system everywhere dominated by international capital. Since their community is so large now, I would urge conspiracy theorists to take the the time, open their minds, and carefully study this book. Here you will learn of a true world conspiracy run in plain sight by nervous experts on the basis of shaky, discredited economic theory. Because this well-researched book so thoroughly exposes the prevailing neoliberal intellectual framework and despite the author's eminent credentials, it is being informally blacklisted by the mainstream media. But I don't care. This is one of the few books that I will re-read several times.
Meer lezen
61 mensen vonden dit nuttig
Vertaal recensie in het Nederlands

Craig Williams
5,0 van 5 sterren A Nobel Prize for economics
11 mei 2018 - Gepubliceerd op Amazon.com
Geverifieerde aankoop
Prins in a just world could easily receive the Nobel Prize for economics . The secret world of Central Banks has a profound effect on how we all survive in this money driven planet . Japan , Europe and the US Central Banks are all in collusion offering the big banks ZIR-Ps , zero interest rate policies while the masses have to settle for convience store sleerpies! The bright side of the story has been how China and other developing countries have been able to challenge the trickle down approach to finance , investing in infrastructure and other social investments. On the other hand with the Fed trillions
go to lining the pockets of our big banks while the finance sector pays little attention to the needs of the public.For anyone interested in economics , this is the key piece of the global puzzle. In a just world the Quantitative Easing might be how we ease Climate Change , a strategy environmental groups might consider . Thank you Nomi Prins for your research and moral strength.
Meer lezen
46 mensen vonden dit nuttig
Vertaal recensie in het Nederlands

Amazon Customer
3,0 van 5 sterren Great reference material, global view of Central Banks, names are named, but a dense read for the average reader
17 september 2018 - Gepubliceerd op Amazon.com
Geverifieerde aankoop
Very dense book, so be ready for a lot of detail with entities you never heard of in a global view...could have summed it up in a page or too. It would be a great reference book for an article or paper. The thing I was most interest in, how to address the problems and issues received 1 sentence...there must be a financial reset. That I would have been interested in learning more about.
Meer lezen
14 mensen vonden dit nuttig
Vertaal recensie in het Nederlands
Ga naar Amazon.com om alle 54 recensies te bekijken 4,1 van 5 sterren
Ontdek het beste van shopping en entertainment
Gratis en snelle bezorging van miljoenen producten, onbeperkt streamen van exclusieve series, films en meer
> Ontdek Prime
Terug naar boven
Over ons
Verkoop bij ons
Amazon-betaalmethoden
We helpen je graag
© 1996-2020, Amazon.com, Inc. en dochterondernemingen