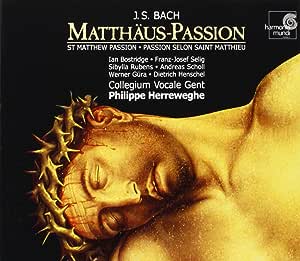 Larry VanDeSande
3,0 van 5 sterren Period performance stylists will enjoy this
5 februari 2005 - Gepubliceerd op Amazon.com
Geverifieerde aankoop
My choral group took on the St. Matthew Passion this year and our director referred this as one of two recorded versions to use as a guide to performance. I bought it for that reason -- to help me understand the music, to which I had almost no familiarity. This became a bit more urgent when our director assigned me a solo role in the second part.

I am slowly learning the St. Matthew Passion and would argue this recording is a good one for people that adhere to period performance practice. The speeds are consistently fast, the strings are exceedingly thin, and the whole thing rather smacks of lack of emotional involvement, not to mention lacking heart and guts.

What I cannot abide, however, is a poor performance or a performance out of keeping with the message of the music. And this music is about the crucifixion, not about some lightweight transaction of people in a place in time. I do not believe this performance lends the weight, heart, guts and emotions to this music that Bach intended.

As I have written elsewhere, I don't believe Bach would much enjoy this type of music making if he was able to return to earth. The fast speeds, the lack of emotional involvement, the nasal and thin orchestras...I believe he would revolt against this. Bach bore 20 children, after all, and was a faithful Lutheran not that long after the Reformation. He wasn't a museum piece and his music shouldn't be performed as if it is.

For my personal satisfaction, the St. Matthew Passion included in Karl Muchinger's 10 CD "Bach Masterworks" set is more suited to my tastes. If you like PPP you will enjoy this recording. Otherwise, look elsewhere.

crepuscule
5,0 van 5 sterren Collegium Vocale Gent and Bach
18 juli 2013 - Gepubliceerd op Amazon.com
Geverifieerde aankoop
I love everything about this performance; clarity of textures, tempi, interpretation of the unfolding drama by all the performing elements, pure beauty of sound etc etc. I bought it because I have their performance of Mass in B min, and my high expectations of this recording have been fulfilled. I think there is a new recording, 2013, by them, of this Passion, and will buy it also - interesting to hear what differences there will be.
Meer lezen
7 mensen vonden dit nuttig
Vertaal recensie in het Nederlands
Ga naar Amazon.com om alle 9 recensies te bekijken 4,7 van 5 sterren
Ontdek het beste van shopping en entertainment
Gratis en snelle bezorging van miljoenen producten, onbeperkt streamen van exclusieve series, films en meer
> Ontdek Prime
Terug naar boven
Over ons
Verkoop bij ons
Amazon-betaalmethoden
We helpen je graag
© 1996-2020, Amazon.com, Inc. en dochterondernemingen