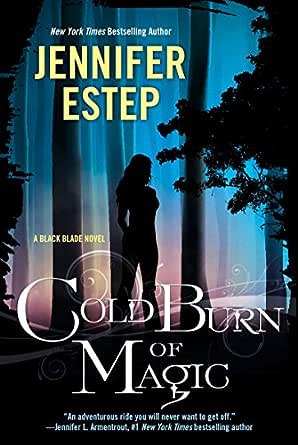 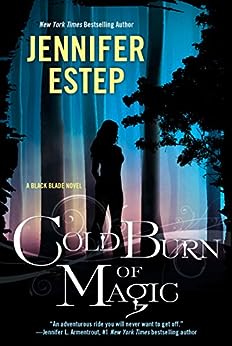 "An adventurous ride you will never want to get off." --Jennifer L. Armentrout, #1 New York Times bestselling author "Jennifer Estep is a genius!" --Simply Nerdy

There Be Monsters Here. . .

It's not as great as you'd think, living in a tourist town that's known as "the most magical place in America." Same boring high school, just twice as many monsters under the bridges and rival Families killing each other for power.

I try to keep out of it. I've got my mom's bloodiron sword and my slightly illegal home in the basement of the municipal library. And a couple of Talents I try to keep quiet, including very light fingers and a way with a lock pick.

But then some nasty characters bring their Family feud into my friend's pawn shop, and I have to make a call--get involved, or watch a cute guy die because I didn't. I guess I made the wrong choice, because now I'm stuck putting everything on the line for Devon Sinclair. My mom was murdered because of the Families, and it looks like I'm going to end up just like her. . .
Alle bekijken
click to open popover

Boundless Book Reviews Lissa
5,0 van 5 sterren I loved this world
23 december 2016 - Gepubliceerd op Amazon.com
Geverifieerde aankoop
I had a craving to listen to a paranormal/urban fantasy. Sara, the lover of this genre, Loves Estep. She read the whole elemental assassin series. So I browsed and came upon Cold Burn of Magic. After listening to the sample, I instantly loved the Narrator. So I said what the heck! if Sara loves her, then I will too lol.

Anyways, on a more serious note. I loved Cold Burn of Magic. It was exactly what I was looking for and I loved this world. Lila has been on her own, since the death of her mother. Somewhat hiding in plain site. This is until she saves Devon Sinclair. One of the major families in this small, magic town. A town full of bright lights and monsters hiding in the darkness.

There are also about a ton of secrets. I was moved by this story more than I thought I would. I love a good kicks ass girl character and I think Lila was even more than that. There was danger, magic, and mystery all thrown in together. This is probably one of the best Paranormal/Urban Fantasy I’ve read/listened to in a long time. Her writing style, it just draws you in. It’s easy to listen/read. Even though it’s a whole different world, you fell into it.

The Narrator, Brittney Pressley, Amazing! she gave every character their own voice. Really made this story, jump off the pages.

Frostfire Imp
4,0 van 5 sterren much like a real teenager would
27 juni 2016 - Gepubliceerd op Amazon.com
Geverifieerde aankoop
Jennifer Estep is a master of the craft. Storytelling is her forte. She weaves tiny details into everything she does; Cold Burn of Magic is no exception. It is a richly layered world, from the magical mountain above Cloudburst Falls to the smallest details on the coins left for the lochness that lives under the bridge. I have a fondness for old fairytales. In Cold Burn of Magic Jennifer Estep weaves in pieces from lots of old fairytales to build upon her idea of a magical world. It’s clever, fresh, and delightful to read.

Cold Burn of Magic is set in the town of Cloudburst Falls, a magical Disneyland if you will. The town is broken up into sections that are controlled by the magical families, with the Sinclair’s and the Draconi’s at the apex of that power structure. For centuries there has been infighting and power struggles as each family vies to take control of more of Cloudburst Falls.

Although I found this book to be a rollicking and action filled read, it does have its flaws. The characters are (mostly) teenagers. As such, they suffer from wildly differentiating emotional responses, much like a real teenager would. For older readers this can be frustrating, but the overall character growth is consistent with their core desires and beliefs. In addition to the character’s youth, it was remarkably easy to predict who the general “bad guy” was early on in the book. Readers are clearly presented with one big bad, which seems to be intended as the main bad guy throughout the Black Blade trilogy. Each book in this series also has a general bad guy. This is easier to predict than it should be. Even so, it doesn’t detract from the overall book.

One of the strengths of this book is the magic system. Magic is broken down into three categories: type, strength, and rarity. A character might have a weak ability to heal and a strong ability for enhanced speed or they might have a singular ability of enhanced strength. Rarity is another matter. Lila has two rare abilities, soul-sight being one. I won’t spoil the other. Something unique to this world is that genetics only determines whether or not you receive magical abilities, not which gift you are born with. If your mother has a strength ability and your father a healing ability, you may have a minor affinity towards these abilities, but you could also end up with a strong ability for enhanced sight and hearing.

The characters in Cold Burn of Magic are a delightful mess. I mean that in the best of sense. Your main protagonist is Lila Merriweather, an orphaned thief living illegally in the basement of Cloudburst Fall’s library. Her goals in life include killing the man who killed her mother, not get caught or executed by one of the ruling families, and eventually moving out of Cloudburst Falls. None of these goals are as simple as they seem. Victor Draconi is the head of the Draconi family and the man who killed Lila’s mother. The main secondary character is Devon Sinclair, the Bruiser (second in command) to the Sinclair family. All Devon wants is to protect his people and the creatures that live in Cloudburst Falls. Only someone is killing off people in the Sinclair family and the creatures in it’s care. Helping an hindering Lila and Devon are: Mo, Lila’s main fence, substitute parent, and owner of Cloudburst Fall’s main pawn shop. Felix is Devon’s best friend, resident smart-ass, and budding Romeo. Claudia is Devon’s mom and head of the Sinclair family, deliberate, scheming, and willing to do anything to protect her family. Deah, the daughter of Victor Draconi with the power to mimic anyone’s ability, who both helps and hinders Lila for reasons no one knows. Blake, son of Victor Draconi, a budding sociopath with anger management issues. Oscar, the honey-beer swilling, country loving, cowboy pixie, who does his best to help Lila.

Cold Burn of Magic is an incredible book full of magic, evil villians, fairytales, magical monsters, and second chances. I know that the second and third books will only be better. You should read it.
Meer lezen
2 mensen vonden dit nuttig
Vertaal recensie in het Nederlands

Amazon Customer
4,0 van 5 sterren Enjoyable Urban Fantasy
27 december 2016 - Gepubliceerd op Amazon.com
Geverifieerde aankoop
I would classify this book as a young adult category book. Having said that it perhaps a bit less young adult than some of the young adult books that I have read. Jennifer Estep has created a new and enjoyable universe where monsters, magiks and mundanes live together. She brings in elements of mob families a' la maffia families into the mix and throws the young but talented thief Lila into the mix. Jennifer has also created some new and interesting magic powers.

All Lila wants to do is to live her life as a thief alone but, not surprisingly, she is soon thrown into the murky waters of family intrigue and, also not very surprising, things start to heat up and Lila quickly gets her hands full defending herself as well as the man she is, somewhat forcibly, hired to protect.

I liked the world building as well as the characters which are well done in the usual Jennifer Estep way. Lila is a good main character, independent, talented, knows how to fight and has a sharp tongue.

The story itself is good with a few twists in it and the main bud guy, at least in the long run, is a thoroughly dislikable character. Although the story is somewhat young adult it is fairly rich, the plot holds together and it is not as silly as in some young adult book. There are a bit of romance (or should I say romances) but it is not overdone and kept on a reasonable level such that it does not intrude on the main story or becomes a boring filler element.