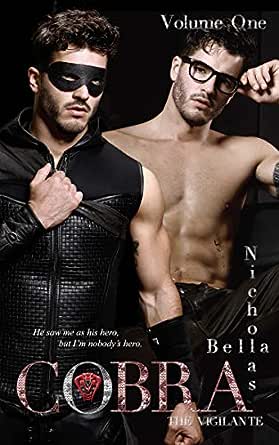 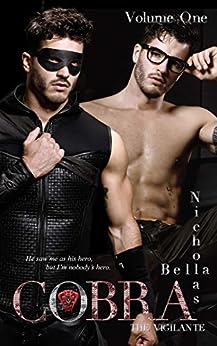 "Looks like I have a penchant for slightly egocentric, snarky and sassy character’s because this is what I got in the first of Nicholas Bella’s Gay Vigilante series, Origins, and I’m hooked." 5 Stars - Amazon Customer

"It’s justice in a Batman meets Deadpool and has a baby named Lucifer kind of way." 5 Stars - Diverse Reader

"He saw me as his hero, but I'm nobody's hero."
At least that's what I tell myself. My name is Eric Cayden, and I'm a man with some pretty extraordinary abilities. It's because I have these superhuman powers, my best friend, Jordan, sees me as hero material. I'm not the only one in the world with special abilities, of course. Some people have already stepped up to the plate and made themselves martyrs, but I'm not about self-sacrificing for the greater good and all that crap. Not anymore. I've already bled for my country. Now, I just want to live a normal life in the shadows and make a lot of money doing odd jobs on the side. Is that too much to ask? Well, according to my friend, Jordan, I'm destined to be something better than a glorified errand boy. He thinks I have a higher calling. He thinks I can be a hero. Well, I'm not too sure about the hero part, but I do hate it when bad people get away with doing evil things. So maybe, just maybe Jordan has a point. We'll see, won't we?

Three months have passed since I've become Cobra, a vigilante. I must admit, I feel like I have a real purpose now and I do enjoy kicking a lot of--well, you get the point. Things were going pretty good until my partner, Jordan, cracked through the firewall of an illegal website on the dark web. I'd been witnessed to a lot of horrors on the battlefield, but seeing this particular round of humanity's sadistic cruelty to humanity actually made me lose my lunch. That's not an easy feat. I know one thing, I'm going to take down the monsters who run this site and all of their sick customers. That's my new life goal.
Warning: This is a novella serial series that will be coming at you fully loaded with hot, gay sex. Yes, there will be all kinds of bodily fluids splashing and squirting in all directions with each episode. Expect body parts to be sliced, diced, gouged, and even ripped apart because I don't half step. This is a series intended for adults only, who want a superhero that loves to play dirty... and by dirty, I mean grimy as hell.

Kindle Customer
5,0 van 5 sterren Cobra: The Vigilante: Volume One
25 januari 2020 - Gepubliceerd op Amazon.com
Geverifieerde aankoop
This book by far, was absolutely fantastic, more like magnificent. OMG, from the first page, it gets better and better. The excitement and lots of mysteries, twists and turns, lots of drama and gory scenes is scary as hell. Definitely a must read, I can't wait for Volume Two. So many thanks, Honey Bee, 🎭😱💙😉🔥🐝🎶
Meer lezen
Vertaal recensie in het Nederlands

Tory
5,0 van 5 sterren There Are No Words For This Level Of Reading
8 januari 2020 - Gepubliceerd op Amazon.com
Nicholas Bella is one of my all time favorite authors! I have read thousands of books and none can compare to what he puts into words! This volume/series as a whole is another great book! The characters come alive and always have such unique lives and circumstances! The world that is created draws you in and keep you wanting more! Then there is of course the off the charts sex! Wow!! Nobody in the word writes hot steamy sex like Nicholas Bella and this book doesn't disappoint! I absolutely loved this book! I was never satisified in just stopping and picking it up later. I always prepare myself to read these books in one sitting because that is how much these characters and world of Cobra draw you in! There are truly never enough good things to write when writing reviews for these books. As always the Cobra series went above and beyond in everything that matters!
Meer lezen
Vertaal recensie in het Nederlands

T. DiGuiseppe
5,0 van 5 sterren So much fun!
18 januari 2020 - Gepubliceerd op Amazon.com
Cobra is such a neat mix of sexy, mundane, gruesome, and vigilantism, that you never know what will be next! It could be crazy action, then good shopping, then heinous crime that it is always interesting. If you want a lot of fun, from starting up a hero enterprise with all the mistakes and lessons learned along the way, this has it, along with seriously sexy times.
Meer lezen
Vertaal recensie in het Nederlands

Lori Ferry
5,0 van 5 sterren What A Great Series
8 januari 2020 - Gepubliceerd op Amazon.com
Cobra : The Gay Vigilante series has been a fun and exciting series so far. I have been following this author since his New Haven Series and i can tell you one thing this series is just as hot and steamy as his other two series. Thank You Nicholas Bella for all you do for us readers.
Meer lezen
Vertaal recensie in het Nederlands