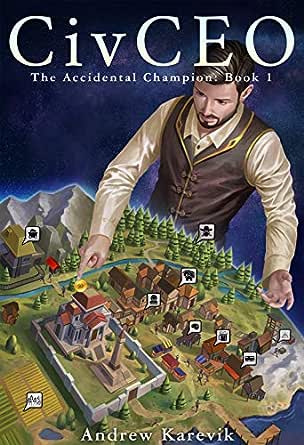 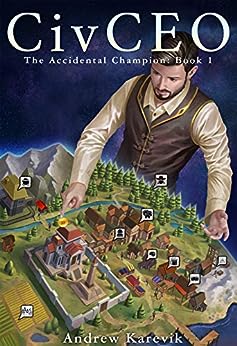 When Charles Morris is forced into retirement, the old multinational company CEO has to accept that it is all over. The days of running his financial empire have finally come to an end. All because of a stupid heart attack. Now what is there for him to do but to curl up in a corner and die?

While Charles is attending a fundraiser, however, something happens and he’s transported into a strange medieval world where magic is real and legendary heroes coexist with mythical monsters.

As it turns out, he’s been snatched by a goddess who was in need of a Champion to grow her village. But the goddess made a mistake. He wasn’t the one she was targeting with her spell. Long story short, she departs without even a word of excuse, leaving Charles stuck with no means of going back home. Not one to feel sorry for himself, Charles embraces this new opportunity, especially since the goddess’ magic returned him to his prime during the transfer.

On his way, Charles meets the inhabitants of Tine, a modest village that’s been awaiting a sign from the gods for centuries. And after discussing the situation with the Mayor, he decides to help them out by assuming the role of their Champion.

Relying on a lifetime of business expertise and the Topsight—an ability that allows him to see and manage the entire village from above—he will have to start back from the bottom and find how to bring this measly Level 1 village to prosperity. One thing is for certain, it will be a long road.

As Charles starts looking for any opportunity to generate gold, the problems begin to pile up. Soon, Charles not only has to deal with bandits and other rulers looking to make a profit out of him, he also has to face internal crises that threaten to escalate into a full-blown uprising.

Because, as he’ll quickly learn, the Mayor had somehow "forgotten" to tell the villagers of their deal, and now they’re mad at him for usurping the position of Champion without the approval of the gods. And so, they give him an ultimatum: he has one month to prove himself and improve Tine, otherwise it’s the hangman’s noose.

Follow Charles as he takes on the challenge of a lifetime. Follow him as he builds roads and shops, hires heroes, develops alliances with neighboring villages…but also fights terrible foes while struggling to maintain the Happiness and Satisfaction levels of his village in the positives.

Joe Schell
3,0 van 5 sterren Not bad...
16 oktober 2019 - Gepubliceerd op Amazon.com
Indeling: Kindle-editieGeverifieerde aankoop
One of the other reviewers pointed out that the MC never failed. I couldn’t help noticing that they were right. Nothing ever went wrong for this guy. Talks to bandits, they’re on his side. Betrays an alliance, no problem, create a new one. Support both sides in a war, no problem. After a while the lack of suspense grew old. I finished it. Not sure if I’d buy a second one though. There was also this odd sense of separation too. The MC seemed to only make deals. No friends, no lovers, no real enemies, just this stream of high level decisions he makes that impact his world, in short much like a game of Civ. In the same way of the game, you are presented with one decision after anther. If you like that sort of thing, this books for you.
Meer lezen
21 mensen vonden dit nuttig
Vertaal recensie in het Nederlands

Mvargus
3,0 van 5 sterren No character development and too much villain power.
18 oktober 2019 - Gepubliceerd op Amazon.com
Indeling: Kindle-editieGeverifieerde aankoop
It has so much potential, but sadly the story ended up so impersonal and lacking in character that I noticed.

Worse, once again a new problem I've discovered with this genre rose up, and that is the villain who is far more powerful than they need to be. Our hero in this tale has ended up in a new world and in charge of a village that desperately needs his attention. There can be a huge story just from that, and from giving him average enemies and obstacles. Instead we have a huge and powerful organization that takes an interest, but that is so slow to act that they are more like Godot in the great tale. You wait and wait to see them do anything as the hero worries, but they are too powerful to really act unless there is obvious plot armor given to the hero.

That was my largest issue. The overpowering villain seems to take up most of the plot and just obliterates the character development I want to see.

Not a bad book, but not what I wanted to read

paul
2,0 van 5 sterren neat idea but all the solutions were obvious
17 oktober 2019 - Gepubliceerd op Amazon.com
Indeling: Kindle-editieGeverifieerde aankoop
Its an interesting concept and I didn’t see any spelling or grammar mistakes. Which doesn’t necessarily mean there wasn’t any. Also, some of the stuff he dealt with such as how buildings were constructed made me chuckle a bit. Unfortunately, despite all that it still wasn’t an enjoyable read. There was simply too much that didn’t make sense, even given the fact that it was mirroring game mechanics that aren’t really supposed to make sense, I couldn’t get myself to reconcile the silliness.
All the solutions seemed obvious. For a minor example that isn’t much of a spoiler, your whole village is fed by a what a single hunter brings in every day, so why do you have four farms. Variety? You can store up to 100 units of wheat and anything over that spoils, so why are you making it. For selling… nope just cause you are a farmer and you should farm. A lot of the book is like this. Another thing that bothered me was people mentioned winter several times, yet the main character never askes simple things like how long is winter, do hunters still hunt, how long until winter. All things he would have no way of knowing.
In the end I couldnt even finish the book got to about 40%

Lithane
4,0 van 5 sterren Interesting story for a lover of strategy
23 november 2019 - Gepubliceerd op Amazon.com
Indeling: Kindle-editieGeverifieerde aankoop
This story really scratches an itch for town management that I never associated with reading before. I enjoyed plenty of aspects about this book and found the overarching plot to be entertaining.

As others have mentioned, the story is fairly linear and predictable, though I would add I was definitely surprised by the approach the mc took to a few of the situations. It does seem like everything just works for the mc, but when you have all the tools the mc has from being the town leader, it isn't too hard to tell what the others need and exploit it.

One thing I did notice is the mc having a distinct lack of fear for his own safety, even though he walks into some of the most dangerous situations I could imagine. Does anyone in this book no how to run away from danger? I'm thinking of a time he runs into bandits while on horseback and he just sits there and lets them drag him off the horse. He's easily able to talk himself out of there, which obviously leads to a sense that there is no danger, and he isn't even OP or has a master plan for every situation, he just has plot armor. Which seems shallow.