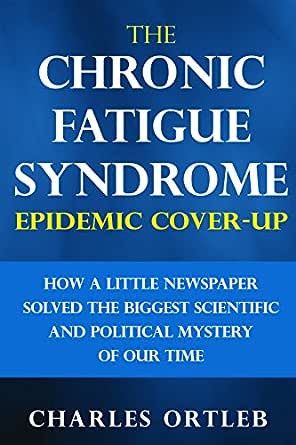 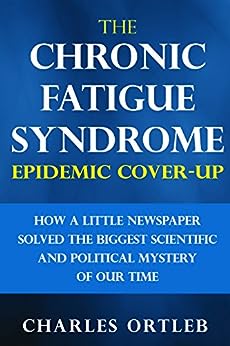 The Chronic Fatigue Syndrome Epidemic Cover-up: How a Little Newspaper Solved the Biggest Scientific and Political Mystery of Our Time (English Edition) Kindle-editie

"As the scientific establishment and mainstream media begin to take the issue of 'Chronic Fatigue Syndrome' or 'Myalgic Encephalomyelitis' more seriously, it is important not to forget the publisher and editor who, from 1988-1997, devoted his newspaper to bringing the issue out of the closet. Charles Ortleb's compelling history of his newspaper and the work of his pioneering CFS reporter, Neenyah Ostrom, is a must-read for anyone who wants to know the whole disturbing story of an epidemic hidden in plain sight."
--Phyllis Chesler

"Charles Ortleb, as editor-in-chief and publisher of the New York Native, was and remains the Izzy Stone of science reporting. He was fearless in his pursuit of the origins of the AIDS epidemic and the government's response in the 1980s. When his newspaper began to diverge from the dogmatic mainstream, however, he was ostracized by the very people he was seeking to inform. In addition, his laser-like focus in the Native on the simultaneous emergence of so-called "chronic fatigue syndrome"--a topic to which he assigned a full-time reporter, Neenyah Ostrom--was laudable. These disorders remain too much alike to arbitrarily submerge one in favor of the other, as the government has done without blinking for thirty years. Ortleb took considerable risks to profitability by pursuing every avenue of investigation on these matters. Yet, as much as Ortleb was criticized, the Native was also a "must read" of its time. When I was reporting my own book on the latter disease, I frequently spied the Native on the desks of high level scientists at the National Institutes of Health. As much as he made them uncomfortable, everyone in the AIDS research establishment wanted to know what Ortleb was going to report next. Ortleb's caustic humor and piercing analysis of what he has dubbed "political epidemiology," and "homodemiology" by the Centers for Disease Control alone makes The Chronic Fatigue Syndrome Epidemic Cover-up worth the read. But the history he recounts here is crucial reading for anyone who missed the Native in its heyday or who didn't "get it" the first time around. Given the recent rise of infectious disease alarms around the world, The Chronic Fatigue Syndrome Epidemic Cover-up is, additionally, remarkably timely for those who seek to understand what drives the American public health establishment in times of crises. A rollicking, fascinating and important memoir."
--Hillary Johnson, author of Osler's Web, Inside the Labyrinth of the Chronic Fatigue Syndrome Epidemic

"Charles Ortleb and the New York Native which he so brilliantly led was the absolutely indispensable source for all information--medical, political, personal--in the first five years of the AIDS epidemic when the major media in this country as well as the medical establishment tried so hard to avoid the topic. Not since I.F. Stone have we seen how important individual investigative journalism could be in breaking through society's silence, when silence indeed equaled death. It is good to finally have the Native's heroic work put on the historical record for all to see."
--Michael Denneny, author of Decent Passions and Lovers: The Story of Two Men

Hillary Johnson, one of the world's most respected Chronic Fatigue Syndrome journalists, called this book "fascinating and important."

By the time you finish Ortleb's stunning memoir, you will understand why the Centers for Disease Control has been unwilling to tell the public the truth about Chronic Fatigue Syndrome. The CDC does not want the public to know that Chronic Fatigue Syndrome is a transmissible illness linked to a virus called HHV-6 that affects every system in the body. They have covered up the illness for so many decades that the neglected virus is totally out of control. Now it is causing a long list of other illnesses and many cancers.

Nobody in the world covered the emergence of HHV-6 and its link to Chronic Fatigue Syndrome more than Neenyah Ostrom. Ostrom's decade of reporting on HHV-6 was recently vindicated by this statement from scientists at the University of Wurzburg: "While HHV-6 was long believed to have no negative impact on human health, scientists today increasingly suspect the virus of causing various diseases such as multiple sclerosis or Chronic Fatigue Syndrome. Recent studies even suggest that HHV-6 might play a role in the pathogenesis of several diseases of the central nervous system such as schizophrenia, bipolar disorder, depression or Alzheimer's."

The big question about Neenyah Ostrom and New York Native is this: How many lives would have been saved if the scientific establishment and the mainstream media had paid more attention to Neenyah Ostrom's reporting on HHV-6 and Chronic Fatigue Syndrome in New York Native?

One day, if there is any justice in the world, the CDC and the medical establishment will apologize for not paying attention to Neenyah Ostrom's groundbreaking work on Chronic Fatigue Syndrome that Charles Ortleb published in New York Native. That would be a fitting end to one of journalism's greatest David and Goliath stories.

Paula Frighetti
5,0 van 5 sterren Still covered up
11 september 2018 - Gepubliceerd op Amazon.com
Geverifieerde aankoop
I gave five stars for Ortleb's courage to tell the truth despite the consequences. It's clear most people can't handle the truth, especially if it interferes with profit or image. The questions and allegations raised in this book have yet to be answered. Millions of people are still suffering. The CDC and NIH are still playing politics with people's lives. I recommend this book to anyone with a chronic illness, or anyone who has loved one with a chronic illness. Take your life into your own hands. Get and stay informed. Our government and its bureaucrats is not looking out for us.
Meer lezen
13 mensen vonden dit nuttig
Vertaal recensie in het Nederlands

GeorgiaPeach
3,0 van 5 sterren Conspiracy theory AIDS and Chronic Fatigue Syndrome were purposly mistreated
7 februari 2020 - Gepubliceerd op Amazon.com
Geverifieerde aankoop
As a Chronic Fatigue Syndrome sufferer for nesrly 3 decades i am nearly always grateful to read and learn as much as possible about this illness which has severly affect me and so any others, unfortunatly, this book delves into areas concerning questions as to whether Chronic Fatigue Syndrome was a created illness formed in conjunction with AIDs as a way to control an entire grneration of human beings. I cannot prove nor disprove The Authors theories, but found myself vastly disturbed by the depth of the Author's Conspiracy Theory concerning those researching both illnesses. Most unfortunate, there was no insight into how to treat symptoms or what the future holds for those of us struggling with these debilitating illnesses.
Meer lezen
Vertaal recensie in het Nederlands

Jeff From Cali
5,0 van 5 sterren This fantastic book is a "must-read" for anyone ever determined to be HIV+.
15 augustus 2019 - Gepubliceerd op Amazon.com
Conscientiously researched and elegantly written, this account by Charles Ortleb of the evolution of the AIDS epidemic from 1981 through 1997 is full of compassion and hope as well as eye-openers on the evil shenanigans of drug companies like Burroughs-Wellcome and the banally criminal managers/scientists leading the CDC. Although the book weighs in at 466 pages, I couldn't stop reading, and felt deeply disappointed when I finished the book, which ends at 1997, the year that the New York Native newspaper closed its doors. On the book's final page Ortleb writes, "The surprising developments that occurred during the two decades following the demise of the New York Native (including the nation-destroying epidemic of HHV-6-related autism), are stories for another day." Ortleb really should write the rest of the story. I stopped reading for some minutes to track down the availability of the drugs Ampligen and Nexavir (formerly called Kutapressin), both shown to be highly effective at suppressing the HHV-6A/B viruses which seem to do the most damage in both AIDS and Chronic Fatigue Syndrome. Yet the one drug (Ampligen) is still not approved for use in the US after over 20 years, though available in Canada, while the other is manufactured only by a single company in Texas and seemingly ignored. The odd fate of these potentially highly-beneficial drugs is a direct result of the "tissue of lies" woven by the CDC and the National Institutes of Health regarding HIV, the HIV test, and Chronic Fatigue Syndrome. The lies, in an heroic effort by Ortleb and his staff writers Neenyah Ostrum (on CFS) and John Lauritsen (on AZT), are lucidly and with great care documented in this book. I bought the Kindle edition if the book; it was probably the best $10 I have ever spent.
Meer lezen
6 mensen vonden dit nuttig
Vertaal recensie in het Nederlands

Up to 100% of the population are exposed (seropositive) to the HHV-6 virus -- which Ortleb claims is the cause of CFS -- mostly by 3 years of age, yet less then 2% of the US population has "CFS".