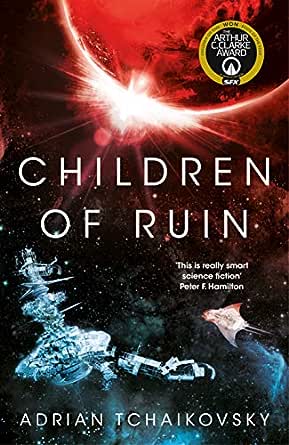 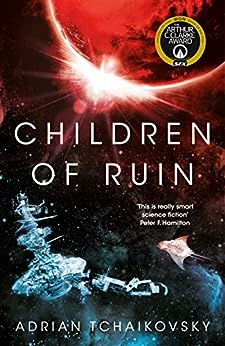 "Children of Time is a joy from start to finish. Entertaining, smart, surprising and unexpectedly human."--Patrick Ness


"Brilliant science fiction and far out world building."--James McAvoy on Children of Time


"A refreshingly new take on post-dystopia civilizations, with the smartest evolutionary worldbuilding you'll ever read."
--Peter F Hamilton on Children of Time

"Like a Stephen Baxter novel with an epic sweep of history (see his Evolution, for example), added to a broad cast of a Peter Hamilton Space Opera and the narrative drive of, say, a David Brin or a Greg Bear old style SF novel, Children of Time soon got me hooked."--SFF World on Children of Time


"Children of Time has that essence of the classic science fiction novels, that sense of wonder and unfettered imagination but combined with this is the charm of a writer who really knows how to entertain, how to spin a good story. Essential science fiction, a book not to be missed."
--SF Book on Children of Time

"The novel's clever interrogation of the usual narrative of planetary conquest, and its thoughtful depiction of two alien civilisations attempting to understand each other, is an exemplar of classic widescreen science fiction."--New Scientist on Children of Time

"An entertaining and thought provoking novel of post humanity, survival and legacy."--SF Signal on Children of Time

"Tchaikovsky's prose is superb, and his world building was exceptional, brilliantly realized on the page, and both fascinating and original."--Civilian Reader on Children of Time

"A novel of sublime plot twists and spectacular set pieces, all underpinned by great ideas. And it is crisply modern - but with the sensibility of classic science fiction. Asimov or Clarke might have written this. A hugely satisfying sequel"--Stephen Baxter

'My most anticipated book of the year' - Peter F. Hamilton, Britain's no.1 science fiction writer

Children of Ruin follows Adrian Tchaikovsky's extraordinary Children of Time, winner of the Arthur C. Clarke award. It is set in the same universe, with new characters and a thrilling narrative.

It has been waiting through the ages. Now it's time . . .

Thousands of years ago, Earth’s terraforming program took to the stars. On the world they called Nod, scientists discovered alien life – but it was their mission to overwrite it with the memory of Earth. Then humanity’s great empire fell, and the program’s decisions were lost to time.

But those ancient terraformers woke something on Nod better left undisturbed.

And it’s been waiting for them.

'Books like this are why we read science fiction'
- Ian McDonald, author of the Luna series

All underpinned by great ideas. And it is crisply modern - but with the sensibility of classic science fiction'
Stephen Baxter, author of the Long Earth series (with Terry Pratchett)

Hexanova
2,0 van 5 sterren Why do publishers change the size of books in a series?
16 mei 2019 - Gepubliceerd op Amazon.com
Geverifieerde aankoop
The paperback version of Children of Ruin is a completely different size than Children of Time paperback. I HATE it when publishers do this. Those of you who like nice, matching, orderly shelves...you've been warned.
Meer lezen
53 mensen vonden dit nuttig
Vertaal recensie in het Nederlands

Klapaucjusz
4,0 van 5 sterren Three stars for first half and five stars for the second
21 mei 2019 - Gepubliceerd op Amazon.com
Geverifieerde aankoop
I had a high hopes for this book because I loved “Children of Time” and prepared myself for a reading feast starting from page one. It did not happen. After reading 40% of the book I was ready to give up.

I was happy to meet next versions of Portia, Fabian and Dr. Avrana Kern again. I also enjoyed meeting the new character, another crazy scientists obsessed with octopuses. But the plot seemed disjointed and moving slowly. Part of the problem was that many events take place in cyberspace and in virtual reality build by interactions of computer programs and alien intelligence. I guess the general idea was to show humans facing phenomena that are beyond our comprehension. I am OK with that but if things are beyond our comprehension how one does describe them? It can be done by analogies to familiar events and if such analogies do not exist the description should be brief. Long pages describing them in details were very tiring, bordering on boring and did not clarify anything for me. Maybe these parts would make more sense to somebody more familiar with computer programming and/or linguistics.

So instead of being engrossed in a story I plodded through it hoping that it will get better. And about 40% into the book it actually did. The multiple plot lines came together and started making sense. I gave up on trying to understand how brain implants work and how exactly humans communicate with octopuses and started enjoying the general picture of (fascinating) octopus society ruled by emotions and separate nerves centers within their bodies. Surprisingly, and to my big relief, the most alien form of life appearing in the story was using plain human language to communicate and its “we‘re going on an adventure” cry was a brilliant touch.

Children of Ruin takes up the narrative a few generations after Children of Time (and directly following up the epilogue of Children of Time). In some ways it is a very different book than Children of Time - we are once again treated to a set of snapshots of the growth of an alien-but-recognizably Earth-like sentient civilization. But this civilization begins on a very different footing, and operates in a way that is not as much a recognizable mirror to human civilization the way that the Portiid civilization was. None the less, it's interesting, engaging, and has the same element of skipping back and forth across time as you try to puzzle out how the glimpses of the past you are seeing led to the current state of things you are also seeing.

For me, the most beautiful part of Children of Time was how it ultimately painted a hopeful picture of a hypothetical future, despite all the setbacks facing the various sentients present in the narrative. Ultimately, Children of Ruin is about those same risks and rewards, and the conclusion it arrives at is deeply satisfying and uplifting.
Meer lezen
15 mensen vonden dit nuttig
Vertaal recensie in het Nederlands

pinsnpushers
5,0 van 5 sterren Why would someone feature paperbacks on a bookshelf
24 mei 2019 - Gepubliceerd op Amazon.com
Geverifieerde aankoop
A: Because they value quantity over quality. but, hey, you can't judge a...nevermind. ive been pumped for this follow up but worried that the first in this series would be impossible to top but was relieved to find that (at 20% in, as everyone seems to agree) that this one is better somehow. its so hard to find scifi books like this anymore and i hope that my fellow scifi fans start paying money for great books and lighten up on the free garbage that clutters my kindle ebook recommendations. and please, if you have a corny comedy leadin on your review, you would probably find those way more exciting anyway
Meer lezen
12 mensen vonden dit nuttig
Vertaal recensie in het Nederlands

Plamen Nenchev
5,0 van 5 sterren Like the First Novel, but Pumped Up on Steroids
8 juni 2019 - Gepubliceerd op Amazon.com
Geverifieerde aankoop
Kudos to Adrian Tchaikovsky for his new book: Children of Ruin is not just as good as, but even better than its prequel. This is a feat very few writers can pull off.

The first book, Children of Time, followed the accidental development of a sentient arachnid civilisation on a planet terraformed and abandoned by humans and its inevitable stand-off with the last survivors of the human kind fleeing from a ravaged and uninhabitable Earth to a planet they think is rightfully theirs.

Grand-scale, epically ambitious and, most importantly, biologically plausible, Children of Time was an enormous reward to read. However, it was also sleepy and long-winded, with a somewhat languid plot and entire chapters that read more like a Discovery documentary than genuine fiction. This is why I was hardly ecstatic when I found out that there was going to be a sequel—but, boy, was I proven wrong!

The plot of Children of Ruin kicks off exactly where Children of Time ended: with a joint expedition of humans and arachnids, long living side-by-side peacefully, to another human-terraformed world, which has been sending inscrutable radio signals. This expedition’s timeline goes side-by-side with the timeline of the human terraforming crew millennia before, as it starts terraforming one of the two Goldilocks planets in the system and makes a terrifying discovery on the other one.

The plot reminds very much of and its structure copies, for the most part, Children of Time, with the same uplifting of a sentient Earth-based species, this time octopuses, and with the same imminent stand-off between civilisations. But despite this lack of originality, Children of Ruin does all of this brilliantly, while the added horror subplot and a much, much tighter writing ensure a much more engaging plot. Adrian Tchaikovsky more or less takes what was best about Children of Time: the audacious scale and the plausible biology, and infuses it with so much more dynamics and energy as to you keep you on edge the entire time, something the first book was only able to do at the very end.

What is perhaps most appealing about both Children of Time and Children of Ruin though is Adrian Tchaikovsky’s incredibly optimistic view of the universe, where the unknown is an opportunity rather than a threat and where differences do not necessarily need to be resolved by conflict, but can end up in mutually beneficial cooperation. This is an incredibly different outlook than that of most modern authors and also a very likeable one, considering the times we all live in.
Meer lezen
10 mensen vonden dit nuttig
Vertaal recensie in het Nederlands
Ga naar Amazon.com om alle 171 recensies te bekijken 4,0 van 5 sterren
Terug naar boven
Over ons
Verkoop bij ons
We helpen je graag
© 1996-2020, Amazon.com, Inc. en dochterondernemingen