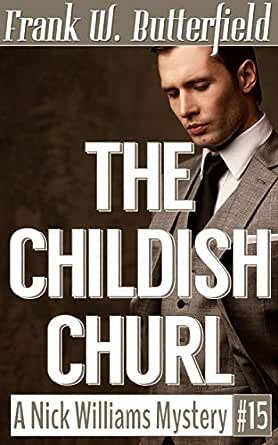 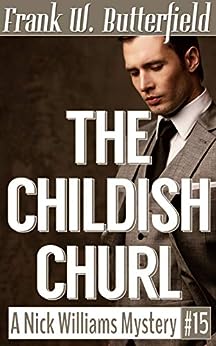 The Lipstick, Nick's high-rise office building on Market Street, finally has a restaurant on the twentieth floor. The Sky-Brau offers freshly-sliced meats, white linens, and luncheon with a view. It's the new hot-spot in town and, who knows, you might end up sharing a table with the mayor.

While trying to get in for some carved roast beef, Nick and Carter run into a daughter with a missing father who's been at work in Africa and hasn't been heard from in a while. Her mother isn't concerned, however. He's been out in the field for months at a time before. But, for the daughter's sake, Nick agrees to look into things.

Meanwhile, a real English lord shows up at the office with some disconcerting news and a favor to ask. Nick isn't sure who the man really is but decides to take him at his word. For the time being, at least.

Over on Nob Hill, wedding bells are ringing for Carter's mother, the soon-to-be Mrs. Louise Richardson, and Nick and Carter's big pile of rocks is where the celebration will take place. The food, as always, will be delicious. The florist has brought a small army of helpers to deck out the house in the gayest way. The dining table is loaded with gifts for the bride and groom. And, there are a few unexpected guests who show up and bring some surprises of their own.

It will be a day that none of the guests will soon forget.

Ulysses Grant Dietz
4,0 van 5 sterren Nick and Carter are old friends, and their lives just get more fascinating with each new story.
17 februari 2018 - Gepubliceerd op Amazon.com
Geverifieerde aankoop
Frank Butterfield is so darn prolific that it’s hard to know what to say about his Nick Williams novels any more. They’re simply a part of my life, amusing me, moving me, and piquing my curiosity as I delve into Butterfield’s largely successful attempts at probing the past and shedding light on gay history with his reluctant gay superheroes. I just read the last two (#15 and #16) and will review them individually. But I’ll start with the fact that I actually exist in the moment these novels are set. Born in July, 1955, I am an adorable infant out East while Nick and Carter and their motley crew are trying to save the world, one rejected queer boy at a time. I say this because I want to indicate the perspective I bring to reading these books as a gay man who grew up in the 1960s, came of age in the 1970s, survived the plague of the 1980s, and has watched with amazement the developments of the last quarter century.

The story nominally focuses on the wedding of Carter’s mother with Ed, a man who is closely tied to Nick, but in a very circuitous way. The wedding takes place in the “big pile of rocks” on Nob Hill, the Victorian mansion from which Nick was exiled as a teenager, and where Nick and Carter now make their home. However, by the time the wedding occurs so much else has happened that it seems like a near afterthought—and for all Butterfield’s breezy assertions that these stories just come to him, I imagine there’s rather a lot of thoughtful calculation behind these complicated plots.

Two things seem central to this novel: the structure of Nick’s friendship network and the structure of his company, Consolidated Investigations. First, there’s an emotional confrontation among Mike, Nick and Carter at the company HQ in downtown San Francisco. Frankly, I’m not sure I entirely tracked the deep emotion that Butterfield sees here, but I understand the facts. Nick, for all his insouciance as a hugely rich gay man who throws money around in order to help people and thwart the homophobic powers of the world, is not superman. He’s a young man who still feels the shame and pain of rejection by his family (and his entire class). He’s undereducated, and emotionally a lot more fragile than he appears. He is arrogant and short-tempered, and dismissive of anyone who disagrees with him. Except for Carter Jones, the man he calls husband. Carter, a laconic country boy turned fireman, has become increasingly educated and sophisticated through his own efforts, even as Nick relishes his personal cultural ignorance and lack of “high hat” manners. Carter understands Nick’s financial affairs better than Nick does, because Carter sees why understanding his power matters. It is Carter who created the rapprochement between Nick and his father—something nigh unto miraculous, if one remembers the first books. It is, ultimately, Carter who is the psychological glue that binds Nick to all the people who love him. He forces Nick to look inward, and to finally understand himself in ways he has hitherto refused to do.

The whole restructuring of Consolidated Investigations seemed a little odd—like technical details that had no real purpose. And yet, I was fascinated, because this is Butterfield pointing out to us that, for all of Nick’s careless spending, what he has created is a gay-friendly corporate empire with over a hundred employees, a fleet of modern transportation, and a notorious office building in a major western city. Nick has made something important, almost against his own instincts, and he has to face up to what it means, which will influence what he’ll do next.

Oh, and there are two murders, which happen without any real significant impact on the plot, except to amplify the ongoing story of how people think about and treat Nick and Carter. And there are four children who enter and disappear from the story, leaving a huge wake of undisguised emotional impact, the long-term purpose of which I can only wonder at. One of the purposes of the children in the story is to bring up the issue of an odd paranormal thread which winds its way through several of these books, relating to Nick’s long-dead mother. I don’t object, but I wonder at what Butterfield is up to with this.

Nick and Carter and everyone else are old friends of mine now. I will read every book, and I will continue to love them and the fantasy they represent. But I grow increasingly interested in the darker, real-life history that Butterfield brings into these stories. Looking back at 1955 from my 63rd year on earth, I understand all too well how lucky I am to be in 2018, for all its strangeness.

John Johnson Jr.
5,0 van 5 sterren Another excellent entry in the series...
10 oktober 2017 - Gepubliceerd op Amazon.com
Geverifieerde aankoop
The latest Nick & Carter adventure will surprise longtime fans of the series in many ways. The murder takes a backseat to the multiple stories Mr. Butterfield unfurls. Carter’s mother is getting married, Marnie feels something is missing in her life, and Consolidated is facing internal (and external) crises. Ultimately love conquers most, as the disparate plots dovetail and Nick realizes he must let go of the pain in order to unite the denizens of The Lipstick.
Meer lezen
Een iemand vond dit nuttig
Vertaal recensie in het Nederlands

Ld572000
4,0 van 5 sterren Long Running Series
13 oktober 2017 - Gepubliceerd op Amazon.com
Geverifieerde aankoop
A continuation of the long running series, must be read in order to make sense, good but a little scattered, some aspects of this particular story don't seem to add much to the overall story..but can't wait for the next story....
Meer lezen
2 mensen vonden dit nuttig
Vertaal recensie in het Nederlands