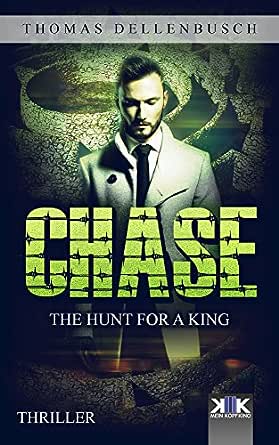 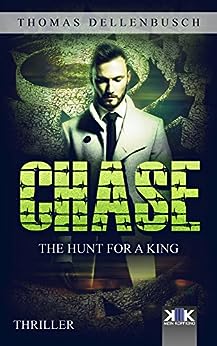 Actionthriller with mysterious puzzles about a famous ancient myth in Scotland. Translated Version from the popular German book series of Movie-Length-Stories


Scotland on the brink of independence: the government is planning its own Scottish monarchy. But when a member of the close-knit planning group reveals the identity of the candidate for the throne, suddenly people appear who want to prevent this royal ascension at all costs - including murder. When CHASE is called in to assist, Jérome and Chen Lu travel to Glasgow. Together with the Scotsman James Campbell, they hunt for his father’s murderer. A secretive wax seal leads them into a maze of ancient legends and lost manuscripts. Can they solve the mystery and save the king - or will old ruins become their grave?


»Dellenbusch masters the clever interplay between tension and release. I clung to his words like a fly in a spider’s web.« Leseträume


»A multi-layered political thriller with the perfect blend of excitement, humor and romance. Highly recommended!« Vielleserin


»I was completely captivated. Suspense right up to the very end!.« Das Lesesofa

When the inebriated body of Ronald Campbell is drowned after a car accident, his sons know it was murder; their father did not imbibe alcoholic drinks. James Campbell had been in the French Foreign Legion with Jerome and requested the services of the Chase agency.
The plot centers around a theory that the mythical King Arthur of the round table was a real figure and ruled Scotland when he died. Ronald Campbell was one of four Marshals of the Heredem Merlinum, The Heirs of Merlin charged over the centuries with protecting the King Arthur documents. If proved to be true the present heir of King Arthur would be crowned king of Scotland.
Deep research revealed history changing evidence to support the claims. An opposition group wants the evidence destroyed and that leads to several action filled confrontations.

Action scenes are well thought out.
Editing, sentence structure and character development are excellent.
The plot was interesting and had enough action to keep me interested in spite of the time devoted to discussing faux ancient archives.

I can recommend this story for history buffs and those who like the detailed references to King Arthur’s time.

mike
4,0 van 5 sterren Theater of the Mind!
8 maart 2017 - Gepubliceerd op Amazon.com
Geverifieerde aankoop
Author Thomas Dellenbusch provided me with an ecopy of Chase: The Hunt for a King for review.

The is the second entry in the Chase series and part of the German Kopfkino series of movie length books. I'm not sure if this is a creation of Mr. Dellenbusch or if he is part of a larger concern. These are books meant to be read in about the same amount of time one would spend watching a movie. Kopfkino translates in English as "mind theater" sound familiar?

Chase: The Hunt for a King is a political/action story revolving around an upcoming vote for the independence of Scotland. The hunt is for the proof of the hereditary claim for the man who would be offered as Scotland's rightful king.

Most of the characters from The Hunt for the Mute Poetess (reviewed earlier here) reprise their roles in this story. I would go so far as to call it an ensemble cast. We have kind of a Davinci Code meets 007 going on.

Great action, an interesting trail of history, and even a bit of romance (kind of like a good movie), makes Chase: The Hunt for a King a great way to spend a couple of hours. We don't get bogged down in unrelated plot lines or superfluous detail. We do get a story with laser focus on the story at hand. I find it a great way to read a story when I don't feel like getting caught up in a 700-800 page epic.

Kopfkino has built for itself quite a niche. If they continue to provide stories of this caliber they will go far (if they haven't already). Compliments to Richard Urmston for a clear, flowing translation that does not sound like a translation. No awkward phrasing or word usage.

Chase: The Hunt for a King by Thomas Dellenbusch is a great way to have an adventure in a limited amount of time without feeling that you have sacrificed story for brevity. I know I am already looking forward to reading more. Enjoy!

Lynn Worton
4,0 van 5 sterren Thrilling Read!
12 april 2017 - Gepubliceerd op Amazon.com
This is the second book in an exciting new crime thriller series which has been translated from German into English. I really enjoyed it!

Enrique "Rique" Allmers is a wonderful character. I liked him a lot when I first met him in Hunt for a Mute Poetess. He runs a security firm called CHASE, which investigates mostly business related espionage and crimes. When his team is called in to investigate a potential murder in Scotland, he sends Jérome and Chen Lu. However, danger is not far behind and as the two delve deeper into the suspicious death, secrets are revealed that could shake the foundations of the United Kingdom.

When I heard that this book was available, I quickly downloaded a copy and began reading it as soon as I could. Set in Scotland this time, this book takes the reader on a thrilling adventure of danger, suspense and mystery. It is mostly told through Chen Lu's and Jérome's point of view (although some scenes are through other characters' eyes as well), it is a pulse pounding ride, with chases, gun fights and several twists that keep a reader hooked. There are several interesting characters in this story too. James Campbell is the oldest son of Ronald Campbell and brother to Peter, and is Jérome's friend from his Legionnaire days. However, he finds himself embroiled in a secret that has been kept by his family for centuries, and which could affect the monarchy of Scotland at a time when there is huge political upheaval from a referendum that could split the UK apart.

As the story unfolded, I found myself on an emotional rollercoaster ride. I really enjoyed it, but also found myself thinking that this story was not as strong as it could have been. The author has incorporated a medieval legend in with his story and has woven it in such a way that it sounds entirely plausible, which I liked. However, I was a little confused at the actions of one of the characters. This character was in a position of authority but acted like a greedy thug and bully. What he hoped to achieve with his tactics didn't make sense to me. Maybe I'm being too critical of this character, as he was no evil villain but a man controlled by fear and greed. Personally, I think I would have liked a stronger villain than Peacock to love to hate. Nevertheless, having said that, he certainly made me dislike him a lot.

I reached the end of the book with mixed feelings, sad that it had ended but happy at the way it concluded. I am not sure if I would call this a movie-length story though, as it felt too short. Having said that though, the amount of descriptive writing made me picture this book in my mind's eye with ease and it played out like a movie in my head.

Thomas Dellenbusch has written an intriguing crime thriller. I love his fast paced writing style, which had me turning the pages, and the flow was a lot smoother than the first book. I would definitely consider reading more books by this author in the future.

Although there are no explicit scenes of a sexual nature, I do not recommend this book for younger readers due to some violence and some mention of torture. However, I highly recommend this book if you love crime thrillers/mystery/suspense genres. - Lynn Worton
Meer lezen
Vertaal recensie in het Nederlands
Ga naar Amazon.com om alle 7 recensies te bekijken 4,3 van 5 sterren
Terug naar boven
Over ons
Verkoop bij ons
We helpen je graag
© 1996-2020, Amazon.com, Inc. en dochterondernemingen