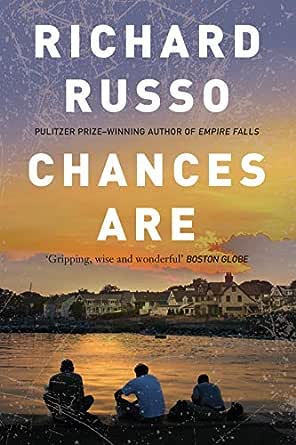 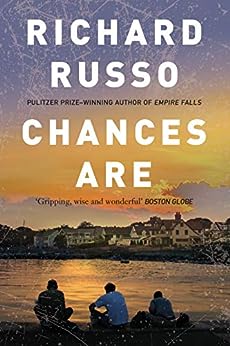 One beautiful September day, three sixty-six-year-old men convene on Martha's Vineyard, friends ever since meeting in college in the 1960s. They couldn't have been more different then, or even today - Lincoln's a commercial real estate broker, Teddy a tiny-press publisher and Mickey an ageing musician. But each man holds his own secrets, in addition to the monumental mystery that none of them has ever stopped puzzling over since 1971: the disappearance of their friend Jacy. Now, decades later, the distant past interrupts the present as the truth about what happened to Jacy finally emerges, forcing the men to reconsider everything they thought they knew about each other.

Shot through with Russo's trademark comedy and humanity, Chances Are also introduces a new level of suspense and menace that will quicken the reader's heartbeat throughout this absorbing saga of how friendship's bonds are every bit as constricting and rewarding as those of family.

For both longtime fans and lucky newcomers, Chances Are is a stunning demonstration of a highly-acclaimed author deepening and expanding his remarkable body of work.

Bonnie Brody
4,0 van 5 sterren "What you can't afford to lose is precisely what the world robs you of."
1 augustus 2019 - Gepubliceerd op Amazon.com
Geverifieerde aankoop
Richard Russo is one of those writers who really knows how to write about men. Like Stegner and Hemingway, the testosterone flows through his narrative as though it is organic. The male characters don't have to talk that much about themselves; just their conversations and dialogue convince the reader that we are entering male territory.

The story takes place on Martha's Vineyard where Lincoln has a home. Lincoln, Micky, and Teddy, now 66 years old, meet in 2015 for a reunion. The three met while slinging hash in a sorority while scholarship students in a New England College. They have not seen each other in over a decade. Lincoln works in real estate, is married, and has 6 children. Teddy never married and has been putting all his energy into editing and publishing a slow fading magazine focusing on the themes of love and faith. He is prone to 'spells' which appear to be a form of panic attacks and bi-polar disorder (marked euphoria followed by depressive episodes). Micky, at 6'6", has always been a formidable man and even with his burgeoning beer belly, he is someone to be reckoned with. As a college student, he was not known for his impulse control. He has always loved music and is still in a rock band.

While this reunion is, on the surface, to reconnect, it is also about a young woman named Jacy, with whom they were all in love with when young, and who disappeared from their lives. Though she was engaged to a rich and upscale guy while in college, she was still 'one of the guys' and could by found regularly with Teddy, Micky, and Lincoln. The mystery has always remained as to what happened to Jacy.

As the book begins with the backdrop of the three men's childhood, it progresses to their reunion on Martha's Vineyard. Dynamics are observed, secrets are revealed and the narrative is told primarily in Lincoln and Teddy's voices, alternating between the two.

I have to admit to an aversion to Greek life on campus, to those who participate in it and those who revere it. I was immediately turned off by the large part that sororities played early in the novel. I didn't get the focus on this aspect of the novel. I would have thought these guys would be attracted to someone very unlike Jacy. But then, I'm not a guy so what do I know,

Russo can write, really write well, and though I didn't consider this his best book, any of his books are better than most that come off the presses these days. If you ever had a college experience, remember the Vietnam draft, and lived through the 1960's and 1970's, there will be a lot to make you feel at home with the background of this novel.
Meer lezen
67 mensen vonden dit nuttig
Vertaal recensie in het Nederlands

Carol Colitti Levine
3,0 van 5 sterren This is Russo??
4 augustus 2019 - Gepubliceerd op Amazon.com
Geverifieerde aankoop
Pre-ordered as soon as I heard Russo had a new novel coming out. Couldn't wait. Got it. Read it. If I didn't see his name on the cover, this could have been written by any generic author this season. Disappointing. It did not have the rich descriptions of Russo's classics like Empire Falls or even recently That Old Cape Magic. If he ever went to Martha's Vineyard, it was clearly as a visitor. There was no depth of scene as in Upstate New York or even The Cape. And. The characters could have been colorful as Rub, but it seemed that there was a rush to finish a most implausible plot rather than take the time to develop these longtime college friends now reunited in their mid-sixties. A cursory history of Vietnam and its ramifications on a generation did not resonate. People who were passionately connected then just forget a girl who went missing decades ago while with them and then all of a sudden care again. Nothing rang true.

Glaring anachronism: The sorority girls at Theta went to Minerva College as a backup school because they didn't get into the Ivy League. In those years, girls went to the Seven Sisters, the Ivy League wasn't co-ed yet.
Meer lezen
57 mensen vonden dit nuttig
Vertaal recensie in het Nederlands

Lynn Price
2,0 van 5 sterren Disappointing
31 juli 2019 - Gepubliceerd op Amazon.com
Geverifieerde aankoop
I am a huge Richard Russo fan, so this book left me wondering if this was really his work. It lacked the humor of his other works, and the plot and sub plots are convoluted and feel contrived to establish mystery and suspense. Overall not his best work.
Meer lezen
54 mensen vonden dit nuttig
Vertaal recensie in het Nederlands

Diana H. Maine
5,0 van 5 sterren Highly recommended
6 augustus 2019 - Gepubliceerd op Amazon.com
Geverifieerde aankoop
CHANCES ARE: A NOVEL by Richard Russo.
Three older men (in their 60’s) converge in Chilmark, a small village on Martha’s Vineyard, for a reminiscence of sorts. The house has been in Lincoln’s family for decades. And though Lincoln and his family rarely visit, the house holds memories that Lincoln (and his friends) can’t seem to shake.
Lincoln, Teddy and Mickey, from different parts of the country and from very different backgrounds, meet at Minerva, a private liberal arts college in New England, in the 1960’s. They are scholarship students and meet as ‘hashers’ or kitchen workers in a swanky sorority house on campus. Lincoln, Teddy and Mickey become life-long friends and soulmates, along with Jacy Calloway, a member of the sorority and a young woman they are all helplessly in love with.
After their 1971 graduation, they all meet at the Chilmark House for a goodbye weekend. That weekend will haunt them for the rest of their adult lives, as they try to untangle the mystery of Jacy’s disappearance from their lives, and the emotional backlash that it brings.

Being of a ‘certain age’, this book speaks to me in a profound way. There are so many events, so many occurrences, so many entanglements that demand a sense of closure in my head. I understand instantly and completely the three friends’ emotional states. Secrets that need to be told; behaviors that need to be explained; friendships that need to be redefined.
CHANCES ARE is humorous at times, very thoughtful, emotional, surprising; a treatise on coming of age and coming to a comfortable place in ‘older age’; the complexities of deep friendship.
I would heartily recommend this book. Thank you Mr. Russo.
Meer lezen
33 mensen vonden dit nuttig
Vertaal recensie in het Nederlands