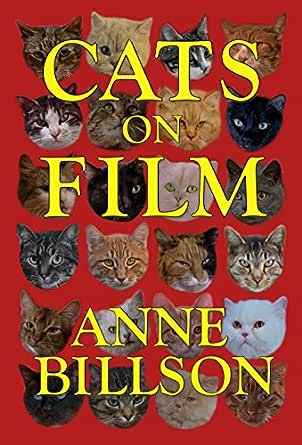 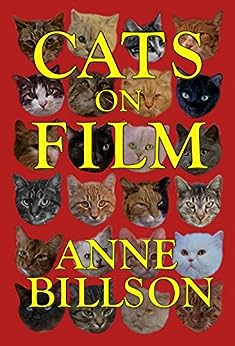 What is a Catguffin? Which type of cat is more dangerous - a Catzilla or a Pussilla? What is the difference between a Catagonist and a Heropuss? And what exactly did Jones the cat say to the xenomorph in Alien? All these questions and many others are answered in CATS ON FILM, the definitive work of feline film scholarship, in which critic and novelist Anne Billson explores the many and varied narrative functions of cats by examining their appearances in one hundred films, from blockbusters to art films, foreign films to cult oddities, rom-coms to horror movies. Read about the true nature of Harry Lime's relationship to the kitten in The Third Man. Discover how the White Cat of Evil launched his career as Blofeld's lapcat in the James Bond franchise. CATS ON FILM. No cat-loving film fan can afford to be without it.
click to open popover

Judy Sisneros
5,0 van 5 sterren If you love cats and film, this book is for you!
26 augustus 2019 - Gepubliceerd op Amazon.com
Geverifieerde aankoop
Includes cats that made appearances in popular and obscure movies. Wish the publisher had the money to publish stills from color movies in color. Still, great quality overall and love the content.
Meer lezen
Vertaal recensie in het Nederlands

Robert Nagle, Editor of Personville Press
5,0 van 5 sterren real hoot to read -- great insights and erudite movie  snark.
11 juli 2018 - Gepubliceerd op Amazon.com
CATS ON FILM gives a delightful and irreverent tour through world cinema from the standpoint of the cats who appear in it. This book grew out of a blog with the same name and does not take itself too seriously. The book introduces various cat archetypes: CATAGONIST, HEROPUSS, CAPANION, CATZILLA, PUSILLA, CATRIFICE, CATGUFFIN and many more. To be honest, I am not particularly a cat lover (they’re ok, but…), and I had hardly given a second thought about cats in film until picking up this book. Probably the only movie I could think of with a cat theme would be CAT PEOPLE, and this book doesn’t talk about it at all except parenthetically. What a shock it was to see discussions of so many movies with significant cat cameos. THIRD MAN, NYMPHOMANIAC (!), Kieslowski’s BLUE, the GODFATHER, the original POSTMAN ALWAYS RINGS TWICE, the original FLY, LA DOLCE VITA, STRAW DOGS, CLOCKWORK ORANGE (!) 1900, PROOF, TRUE GRIT, DAY FOR NIGHT, AWFUL TRUTH, GRAND BUDAPEST HOTEL, BREAKFAST AT TIFFANY’S (!), THE LEOPARD, and many, many more. My first reaction was, wow, there are cats in all these movies? Aside from HARRY AND TONTO, I had hardly noticed them!

This is a logical and well-organized work — you can find a list of film discussed at the logical Table of Contents at the beginning (though it would have been better to have hyperlinks). It can be fun to stumble upon the unexpected, and the book itself has glorious color photographs and helpful labels like “Major Cat Movie.” Clearly Ms. Billson writes with an encyclopedic knowledge of cinema (she has also published Spoilers: Selected Film Reviews Part 1 1989-1995 and Spoilers: Selected Film Reviews Part 2 1995-2001 and writes movie colums regularly for the “Guardian”). I found new insights about movies I thought I already knew (or at least, I thought I did!) I now know about a lot of obscure films simply because of the odd fact that it has a cat in it.

Because Billson already is an accomplished novelist (specifically in horror, mystery, vampires and other things), the book has unexpected bonuses. For the movie ALIEN she does a brilliant interior monologue of the same story from the cat’s point of view. (You remembered that there was a cat in that movie, right? I didn’t!) For the movie INSIDE LLEWYN DAVIS, the book has a nice extended piece (The Moggyssey) teasing out the Homeric aspects to the plot. (By the way, I totally did not remember the movie having a cat in it!) For STUART LITTLE, she makes a tongue-in-cheek proposal to change the title of the movie to “Snowbell” (because the cat character is more interesting and complex). Billson writes:

*******
Since Hollywood is largely run by dog people, cats are often relegated to secondary characters with bad attitudes, typified by animated propaganda such as LADY AND THE TRAMP, CINDERELLA, TOM AND JERRY or MERRY MELODIES shorts featuring Tweetie Pie and Sylvester, which try to brainwash children into thinking cats are evil or stupid, while dogs, rodents and birds are virtuous and should be given carte blanche to torment the felines.”
**********

These creative takes are fun, clever and interesting.

The book spends a lot of time on cats in genres like horror, James Bond and kid’s movies (which is to be expected). I particularly appreciated Billson’s speculation about the cats themselves as opposed to the role they are expected to play in the movie. She guesses when more than one cat is used for the same cat character in a movie (like THIRD MAN) and provides horrifying backstory about how cats were actually mistreated during the shooting of the film (as in ADVENTURES OF MILO AND OTIS).

This clever book is based on a conceit that cats are more than story props. It’s an intriguing (though now obvious) idea. Fake soliloquys notwithstanding, I don’t get the impression that the book is trying to anthropomorphize the cat characters; it is just suggesting an alternate and yes, a more compassionate way to read movies. The book is a celebration of cats for what they naturally are in mainstream movies; At the same time, there’s more than enough obscure Japanese, European, animation and old genre movies described here to make the ardent film buff happy.