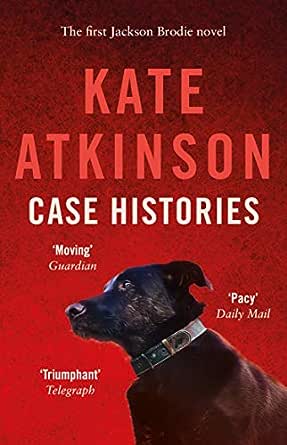 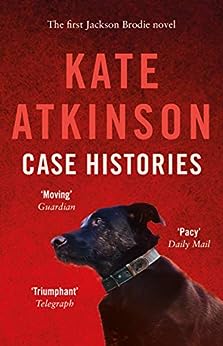 'An astonishingly complex and moving literary detective story that made me sob but also snort with laughter. It's the sort of novel you have to start rereading the minute you've finished it' Guardian

Cambridge is sweltering, during an unusually hot summer. To Jackson Brodie, former police inspector turned private investigator, the world consists of one accounting sheet - Lost on the left, Found on the right - and the two never seem to balance.

Surrounded by death, intrigue and misfortune, his own life haunted by a family tragedy, Jackson attempts to unravel three disparate case histories and begins to realise that in spite of apparent diversity, everything is connected...

Clem
5,0 van 5 sterren If you're a fan of hers, you'll love this one. If not.....
18 januari 2015 - Gepubliceerd op Amazon.com
Geverifieerde aankoop
I’m giving this book a five star rating. Having stated that, I’ll also tell you that when I finished this book, I went to amazon.com and read all of the one star ratings (the worst) by readers, and I pretty much agreed with all of them. How is such a thing possible? Well, you really can’t explain such a concept or idea, unless you’ve actually read a Kate Atkinson novel.

First, Kate Atkinson’s books, while not really necessarily depressing, are certainly filled with depressing people. I’m thoroughly convinced after reading several of her books, that this author had a pretty miserable, warped childhood. When all you know is heartache, depression, and trauma, how can you really be expected to write about anything else? She always injects humorous observations and witty descriptions throughout the pages, which makes you laugh out loud at the same time as you’re reading about the lives of these sad lugs.

Next, we must remember that Atkinson’s strength is writing about people and their thoughts, feelings, and emotions. She doesn’t necessarily tell a linear story. This book was labeled as the first of one of her many “Jackson Brodie Novels”. Jackson Brodie is a detective, yet these books are not in the traditional “whodunnit” vein. If you’re looking for a good mystery novel, the Jackson Brodie series probably shouldn’t be your first choice.

Yes, this book does have a few crime investigations running through it. We get a missing child, a random murder of a child, and, what could be described as an “ax murder”. What’s unique is that these incidents happen in different times and in different places, and Atkinson’s skilled writing manages to somehow make all of these situations current, which is when we meet Jackson Brodie. Jackson (obviously) is just as miserable as all of the people affected by all of these tragedies. He had a rotten childhood, a rotten marriage, manages to get beat up a lot, and on and on and on.

Once we arrive at the book’s conclusion, many were disappointed at the abruptness of the finale, and felt that things were thrown together to conveniently to appear the slightest bit realistic. Those observations are correct. As stated, though, this book is about people and not necessarily events.

If you have the stomach for books such as this (and I haven’t even discussed the foul language, the sex, the suicides, etc.), you’ll probably find it enjoyable as I did. I’ll probably have to wait several months before I read the next book by this author. And when I do, I’ll ensure to have some Prozac handy.
Meer lezen
114 mensen vonden dit nuttig
Vertaal recensie in het Nederlands

L J Wright
1,0 van 5 sterren An overhyped, poorly written story. Atkinson is no literary genius by a long shot.
11 september 2018 - Gepubliceerd op Amazon.com
Geverifieerde aankoop
I was sucked into this sorry mess of a story by Steven Kong's recommendation. What a mistake.

I would like to say something good about the book but can't. Atkinson is an overprraised, incompetent writer. She may be able to put sentences together (oh please spare us the parentheses!) but she sure as heck can't tell a story. The promised intersection of the three cases never happens. What a misrepresentation.

In short, I felt bored, angry and robbed of my time. Shame on you, Steven King.

And Kate Atkinson . . . you need to take a few creative writing classes. There was no one to care about in this book. I disliked everyone. What a waste of time.
Meer lezen
21 mensen vonden dit nuttig
Vertaal recensie in het Nederlands

Coach Connye
5,0 van 5 sterren Kate Atkinson is a Must-Read Author and That Includes Case Histories by Her
4 februari 2016 - Gepubliceerd op Amazon.com
Geverifieerde aankoop
A college friend with whom I'm still in contact after 45 years recommended a Kate Atkinson book on Facebook. I trusted her advice; she's an avid reader. That book was Life After Life. It is still one of my favorite reads. Immediately I read Behind the Scene at the Museum at the museum. It too is a favorite. Another reader whom I admire has read both those titles, adding she loved every one of the Jackson Brodie novels, Case Histories being the first in the series. I set out to read every one. The three case histories that open this novel feature sharply drawn, complex characters. In the first two histories, parents love children with such deep and abiding love; their thoughts about their children are poignant and exquisitely crafted. In the third case history, a parent suffers and stumbles into a moment that ruins hopes and dreams. Soon Jackson Brodie intersects with these three seemingly separate and entirely different histories. He is a rich character, less tragically burdened than most detectives who've witnessed the worst that man inflicts upon another man. He is smart, human, and ironic. Readers like him--at least this one does--I liked him enough to read the second in the Jackson Brodie series, but that's another title, another mystery, and another adventure. Follow the advice of my friends. Read Kate Atkinson. That is all.
Meer lezen
38 mensen vonden dit nuttig
Vertaal recensie in het Nederlands

A customer
4,0 van 5 sterren She deals in tragic circumstances - bad things happening to good people
23 november 2017 - Gepubliceerd op Amazon.com
Geverifieerde aankoop
This is the second Kate Atkinson book I’ve read. She deals in tragic circumstances - bad things happening to good people. I wouldn’t normally be drawn to this subject matter, but she is very witty and keeps me chuckling throughout the stories. Each character has a story, often heartbreaking, but also finds a way to survive and looks at the world with a skewed and comical attitude. This begs the question of how we each survive in a world that can be so cruel. The detective, Jackson, is a kind, compassionate and generous man. Bad things happen to him, too, but happily, so do good things. The author has created a character that I want to follow.
Meer lezen
17 mensen vonden dit nuttig
Vertaal recensie in het Nederlands

Manaus
3,0 van 5 sterren Individual Personal Reports as per a detective's notes
15 oktober 2015 - Gepubliceerd op Amazon.com
Geverifieerde aankoop
This book is a quandary because there are 28 quite separate and individual chapters and it is only in the last few that you grasp how they are fit together. Perhaps, a more intelligent reader could recognise in the context of each individual chapter, the links that hold it together, but for the average reader, it was a little confusing. It is a very different kind of detective novel from the usual and perhaps that is the writer's style and some people love it. However, as the individual case histories are so complete in themselves, it is a frustrating book in that you keep wanting to make lists of who everyone is and what happens. For a casual reader, reading only 1 chapter at a sitting, it becomes quite an effort to remember what happened before to this next character you have not seen for 5-6 chapters, and this applies to all the characters. There are some comic moments and great comments from the individuals but the book failed to entice the present reader because of its structure.
Meer lezen
22 mensen vonden dit nuttig
Vertaal recensie in het Nederlands
Ga naar Amazon.com om alle 779 recensies te bekijken 4,0 van 5 sterren
Terug naar boven
Over ons
Verkoop bij ons
We helpen je graag
© 1996-2020, Amazon.com, Inc. en dochterondernemingen