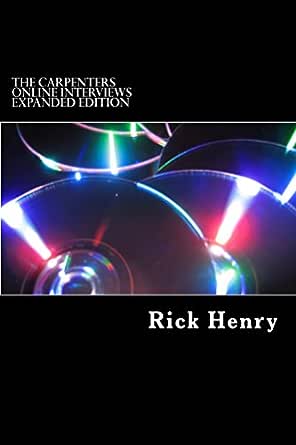 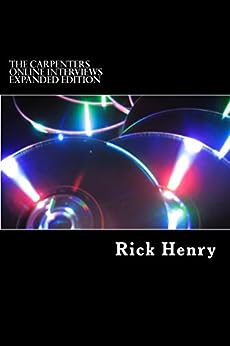 This book contains several interviews, conducted by Rick Henry, of people who are in one way or another connected to Carpenters, Karen Carpenter or Richard Carpenter, with a few contributions by his associate Irene Economou.

This book contains several interviews, conducted by Rick Henry, of people who are in one way or another connected to Carpenters, Karen Carpenter or Richard Carpenter, with a few contributions by his associate Irene Economou.
click to open popover

Irene Economou
5,0 van 5 sterren A Must-Have Book for Carpenters Fans!
31 januari 2015 - Gepubliceerd op Amazon.com
Geverifieerde aankoop
To a diehard Carpenters' fan there is no such thing as too much information. After all, there just might be some new tidbit about a song or lyric you weren't aware of before, or you might learn about some unusual event or history associated with a particular song. The fascination with the Carpenters is never over.

Enter Rick Henry with his latest book, "Expanded Edition: The Carpenters Online Interviews." Like his first edition, the second edition also features individuals that provided lyrics and/or songs to the Carpenters. One of the new interviews is with Terry Draper, who was a member of the group, Klaatu, and co-authored "Calling Occupants of Interplanetary Craft." Did you know that it was Tony Peluso, guitarist for the Carpenters, who suggested this song to Karen and Richard? In the Danny Ironstone interview you learn about the history and inspiration behind the song "Prime Time Love." How did Karen make this song more her own? I liked the pure honesty in what both musicians had to say about their songs and how they felt knowing their songs were going to be repurposed in the Carpenters' signature style.

One of my favorite interviews was what actually turned into a four-part essay by Palma Pascale, the author of "Love Me for What I Am." Palma gives us a marvelous, detailed scenario of how hard it really is to be a lyricist in this industry and that nothing is ever a sure-thing. This interview was in the first edition of Rick's book, but I enjoyed it even more reading it again. What is new is the tribute written by Tim San Paolo, a close friend and associate to Palma. She was such a down-to-earth person.

I also enjoyed getting to learn more about Lucy Drive, the actress, who portrayed Karen Carpenter in the documentary film, "The Last Hours of Karen Carpenter," which aired in August 2014.

Then we get to a marvelous section of the book, the section dedicated to Karen's solo album: "Karen Carpenter: Behind the Scenes of the New York Solo Sessions." It is now over 30 years since Karen Carpenter passed away (February 4, 1983), yet we are still itching to know more about this fascinating songstress. There are six interviews with musicians /technicians involved with Karen's project. I was completely immersed in what each individual had to say. You cannot read interviews like this anywhere else! This edition expanded the interviews with well-known drummer, Liberty DeVitto, and multi-talented Russell Javors. Two of Russell's songs ended up on Karen's solo album. These are the country-tinged "All Because of You" and the new-wave rocker "Still in Love with You." Russell also composed the arrangement for the latter. Additionally, he wrote "Truly You," which is one of the nine, unreleased Karen solo songs.

The third section of the book, entitled, "From the Perspective of the Fans," shares insights from several fans. It's always interesting to learn more about fellow Carpenters fans and how they were impacted by Karen's talent. Each story is unique. Finally, the book ends with an interview with Rick Henry. We get to learn more about him, how the concept for the original "The Carpenters Online Interviews" book came about, and what motivated Rick to do this second edition.

I thoroughly enjoyed this book and will read it more than once. It also is attractively designed and makes a beautiful coffee-table book to share with visitors. Besides Carpenters fans, if you know someone who wants to learn more about the history behind some of the Carpenters songs and Karen's solo experience via interviews, this is definitely the right book to read!

ANDY M
5,0 van 5 sterren A must have...
6 januari 2019 - Gepubliceerd op Amazon.com
Geverifieerde aankoop
Anyone who loves Carpenters music be will intrigued by this collection of interviews by people who knew or worked with them. A lot of time, energy & thought went into this book.
Meer lezen
Vertaal recensie in het Nederlands