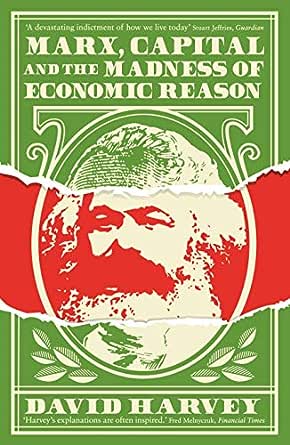 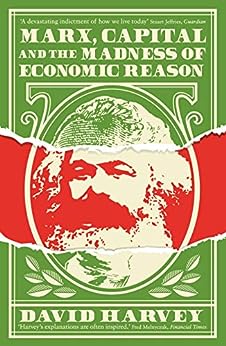 Marx's Capital is one of the most important texts of the modern era. The three volumes, published between 1867 and 1883, changed the destiny of countries, politics and people across the world - and continue to resonate today. In this book, David Harvey lays out their key arguments.

In clear and concise language, Harvey describes the architecture of capital according to Marx, placing his observations in the context of capitalism in the second half of the nineteenth century. He considers the degree to which technological, economic and industrial change during the last 150 years means Marx's analysis and its application may need to be modified.

Marx's trilogy concerns the circulation of capital: volume I, how labour increases the value of capital, which he called valorisation; volume II, on the realisation of this value, by selling it and turning it into money or credit; volume III, on what happens to the value next in processes of distribution.

The three volumes contain the core of Marx's thinking on the workings and history of capital and capitalism. David Harvey explains and illustrates the profound insights and enormous analytical power they continue to offer in terms that, without compromising their depth and complexity, will appeal to a wide range of readers, including those coming to the work for the first time.

Karl Marx's Capital is one of the most important texts written in the modern era. Since 1867, when the first of its three volumes was published, it has had a profound effect on politics and economics in theory and practice throughout the world. But Marx wrote in the context of capitalism in the second half of the nineteenth century, and his assumptions and analysis need to be updated in order to address to the technological, economic, and industrial change that has followed Capital's initial publication. In Marx, Capital, and the Madness of Economic Reason, David Harvey not only provides a concise distillation of his famous course on Capital, but also makes the text relevant to the twenty-first century's continuing processes of globalization. This book serves as an accessible window into Harvey's unique approach to Marxism and takes readers on a riveting roller coaster ride through recent global history. It demonstrates how and why Capital remains a living, breathing document with an outsized influence on contemporary social thought.

Not here. David Harvey’s manner of explanation is clear and cogent. He sticks to what Marx had to say in Das Kapital and precious little more. He sticks to the subject. He speaks of Capital in Das Kapital and does not discuss many of the other issues Marx discussed in this title. His approach is perhaps too myopic because there many other interesting topics in Das Kapital. But you will finish this book with at least the feeling that you understand what Marx had to say about the role of capital and money in capitalistic economic systems.

Reading David Harvey is way better than reading Marx. Harvey has decoded what Marx said for the reader. This book comes highly recommended.

Joseph the evilcyclist
5,0 van 5 sterren It is built like a Ponzi scheme were continual growth is required to ...
20 februari 2018 - Gepubliceerd op Amazon.com
Geverifieerde aankoop
Marx, Capital, and the Madness of Economic Reason by David Harvey is a modern critique of Marx’s three volumes of Capital. Harvey is the Distinguished Professor of Anthropology at the Graduate Center of the City University of New York (CUNY). A leading social theorist of international standing, he graduated from University of Cambridge with a Ph.D. in Geography in 1961.

Madness seems to be the description of modern capitalism. It’s destroying the planet. It is built like a Ponzi scheme were continual growth is required to keep it alive. It’s nearing its limits as an economic system. Wages have remained stagnant in the US while the standard of living is propped up by cheap imports and rising personal debt (not to mention worldwide debt). More and more people around the world are buying cars only to sit in them for hours in traffic. Climate change is real and brought on by mankind by the burning of hydrocarbons and the stripping of the land. We have planned obsolescence of consumer goods. We are hit at every turn with fees; look at a cell phone bill, for example. Companies charge convenience fees to pay online over mailing a check. As a whole, we are not living as well as our parents did. We, as a whole, also, don’t have the jobs that gave us affordable comprehensive health care. Skilled labor is disappearing as industries deskill the labor force and create a surplus of workers to keep jobs scarce. We are living in times much like those Marx and Engles had witnessed in their lifetimes.

Harvey covers all three volumes of Capital with real-world explanations and where Marx got things wrong. Marx many times forget to take into account expanding technology. Machines were seen and are things not to make the worker’s job easier but as something to increase profits. Today machines take many old jobs away as well as the expansion of globalization. In early industrial England, wages were set to the price of bread. Workers had to eat to remain productive. To increase profits, industrial leaders pushed for laws allowing the importation of cheap grain. Workers backed this idea; cheaper bread meant better living. Industrialists supported it because they could keep wages lower if bread was cheaper maximizing their profits. Today this exists in the big box stores keeping prices down so workers do not realize their wages are stagnating and subsidized processed food keeps prices down so we think we are well fed.

One particular case in the book concerns China. It is 200 years of capitalism rolled up into a handful of decades. When thinking of New York City, Los Angeles, the highway systems, and the concrete sprawl of America consider that in the 100 years between 1900-1999 the United States used 4,500 million tons of concrete to build all of that. Between 2011 -2013 China used 6,500 million tons of concrete. In a two year period, China used more concrete than the US did in 100 years. The banking crisis that started in the US in 2007-2008 could have been a worldwide disaster. When US and western markets crashed, imports went down. China found itself in a crisis. A totalitarian state does not want labor unrest and with millions now out of work China began a massive public works project. Roads, dams, and even ghost cities were built with borrowed money. The government told the banks to loan money and loans pour out of the banks. China prevented its collapse by temporarily diverting labor to other projects until the crisis passed. The command economy of China is not Marxist; it is a totalitarian system that mimicked a century of capitalism in a handful of years. China, like the US, now sits under a mountain of debt.

Harvey writes an interesting study of Capitalism as seen by Marx and sometimes as revised for the modern world. The ideas are the same. Capitalism exists not to make a better life for everyone, but to maximize profits. Totalitarian regimes paid lip service to Marx in the past but none really came close to following his theories, hence, Leninism, Stalinism, and Maoism where Marx was merely a wrapper covering atrocities. Today, in America, socialism is misunderstood and feared. People hate socialism except for public roads, public parks, public schools, subsidized food… Some of that has changed after the bank collapse and the recognition that hard work and a good education will still leave many poor and deeper in debt. The 1% has changed from being a symbol of outlaw motorcycle gangs to bankers, vulture capitalist, and CEOs.

No one is saying that we need a revolution or the Marx was 100% correct. We have seen what capitalism can and will do when its free to operate on its own or even forced as the case of China. Instead of condemning Marx to the dustbin of history we need to take look at it without the lens of the Cold War. Marxism did have a positive effect on Europe in the mid to late1800s. Workers organized work weeks were shortened. Leisure and vacations became more common for workers. Labor is an important part of any economy but rarely gets the respect it deserves.
Meer lezen
61 mensen vonden dit nuttig
Vertaal recensie in het Nederlands

wsmrer
5,0 van 5 sterren No one has The Answers -- Yet
12 februari 2018 - Gepubliceerd op Amazon.com
Geverifieerde aankoop
Marx – a very wise man – is a hard read as Shakespeare is.
David Harvey treatment is a gift. For he leads you into the difficult task that Marx set for himself to not only describe the working of a capitalist market economy but of conquering its irrationalities. As western history evolved Marxian value theory was displaced by Micro and Macro divisions and new ways to deal with the same issues in new language.

This in turn has evolved. The post-war Keynesian fiscal intervention shifted to monetary intervention, the massive transformation in policy formation brought about by Milton Friedman and the Chicago School in the decades of the ‘70s and ‘80s you see an attempt to understand the inner-nature of a capitalist market economy with the intent of creating a better functioning Market System. The spill over effects were to lay waste to the notion of fairness and concern for the citizenry and shift to protection of property. The outcome has not been impressive as the Financial Crisis and the following periods of Austerity and Inequality and slow growth demonstrate.*

David Harvey lays out modern times as Marx might have viewed them:
"Where the real science begins is when we take these concepts, abstractions and theoretical formulations back up to the surface of daily life and show how they can illuminate the whys and wherefores of the daily struggles which people in general, but workers in particular, face in their struggles for survival. This is what the concept of capital is designed to do and this is what Marx hoped Capital as a book would help us accomplish. What I hope this exposition of Marx’s thought has done, is to suggest that Marx’s way was not a unique highway to be followed but an open door through which we could progress to ever higher understandings of the underlying problems that inform our current reality.”
Harvey pushes Marx well in that direction.**
5 stars
*Here one could shift to Harvey’s Brief History of Neoliberalism. An important work.
** Alain Badiou recent, Greece and the Reinvention of Politics, carries communism in pure Marxian treatment as goal to be re-pursued in a troubled world.
Meer lezen
28 mensen vonden dit nuttig
Vertaal recensie in het Nederlands
Ga naar Amazon.com om alle 24 recensies te bekijken 4,4 van 5 sterren
Terug naar boven
Over ons
Verkoop bij ons
We helpen je graag
© 1996-2020, Amazon.com, Inc. en dochterondernemingen