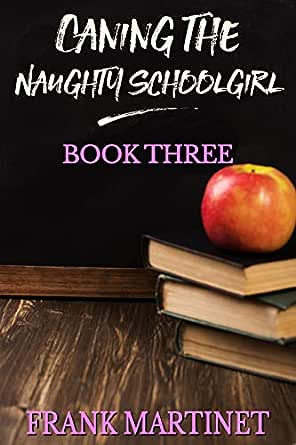 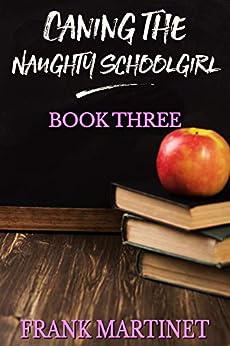 Although these stories take place within a school-based setting they differ from the more realistic accounts typically found within the schoolgirl spanking fiction genre. They are, however, representative of Frank Martinet's distinctive approach to spanking fiction, and so tend to focus on the actual punishments rather than the details of school life in general.

The Deciding Factor: Emmeline, Nicole, Charisma and Denise are sent to the Headmistress for punishment. All are bewildered as to the nature of their crime, because in truth, they have done nothing wrong, yet the Head canes each and every one of them. Jasmine and Agatha are next and suffer a similar fate, but show they have potential to become a prefect. It seems the qualities a prefect must have are not academic prowess, popularity and good behaviour - merely the ability to take a thrashing in stoic silence!

Reformed: A nervous Stacy awaits her punishment with dread, knowing what to expect from the Headmaster's cruel cane. Her fear intensifies when she learns how many strokes she is to be awarded - three dozen. It is every bit as bad as she fears - yet she endures.

A Cure for Guilt: Olivia congratulates herself for choosing to receive extra strokes of the cane over her jeans instead of getting punished on her bare bottom. But she swiftly regrets doubling her punishment by refusing to take down her pants, not to mention the additional penalty strokes incurred. She is such a bad, bad girl...

Ruppert's Law: Pretty, sweet little Cora is under suspicion of putting tacks on the teacher's chair. Thomas sits on the chair, then he and fellow-teacher Frank Ruppert make a wager as to the guilty party: the winner buys the other a steak dinner. Frank's theory is that it's always the prettiest girl who is the culprit. Could he be right...? Cora gets caned anyway.

Minx: Pretty senior girl Geraldine is up before the Headmaster yet again for a caning, which she takes without a murmur. But when the Headmaster acquires three new canes, she certainly feels the difference in the thickness of the rod as it cuts into her bare bottom.

Temptation: Veronica faces twelve cruel strokes of the cane, which is going to be horribly painful. But the Headmaster offers her a deal, a wager, which may reduce the number of strokes. So now it all depends on how much Veronica is prepared to risk.

I'll Take the Cane: Molly attends St Andrea academy, a prestigious but old-fashioned preparatory school with a track record for discipline. She slaps another pupil and rather than risk expulsion, Molly opts for a caning instead, and although terrified, is disappointed when she's awarded various other types of punishment. But perhaps she can get a caning after all...