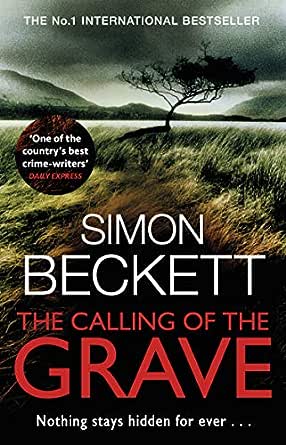 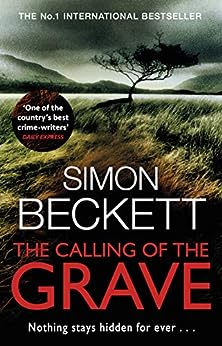 'As bone-chillingly bleak as its subject . . . this doesn't disappoint' Financial Times

A serial killer is on the loose and David Hunter suddenly finds that the past is far from dead and buried.

The escape of a psychotic rapist and multiple murderer brings DI Terry Connor to David Hunter's doorstep, years after their bitter rift.

This unwelcome reminder of the past forces Hunter to confront the situation at hand: eight years earlier Hunter and an ill-fated Body Recovery team, has tried to find the graves of Monk's teenage victims on the bleak expanse of Dartmoor.

Only one of the missing girls' bodies was ever found.

Suddenly Hunter receives an appeal from Sophie Keller, a young woman who also worked on the operation, and nothing is quite as it seems. Hunter is forced to question who he can really trust.

Especially when his own life depends on it.

When DI Terry Connor turns up on David Hunter's doorstep one morning, it is an unwelcome reminder of the past in more ways than one. The two men used to be friends, but the policeman also brings bad news: the psychotic rapist Jerome Monk has escaped, and Hunter finds his past is far from dead and buried as he once believed.
Alle bekijken
click to open popover

Reed
5,0 van 5 sterren Never dull
7 oktober 2017 - Gepubliceerd op Amazon.com
Geverifieerde aankoop
These books keep me interested from start to finish. Every page is full of cool information about the processes of death and how Hunter works with such passion and I feel like I am walking around with him. The edgey stories are doubled up so well that you think that you know who the killer is for awhile but then something else happens and you are following a different trail. I like that Dr. Hunter is so likable and human. He has fears and doubts about how he is looking at clues. That he has has a major loss in his life and it has changed his way of dealing with issues. I love the descriptions of the scenes and characters it brings them to life in my mind. The hints at possible romance are just enough but he does surprise me and I really like that part of a good and honorable man. I really am amazed by forensics and pathology.
Meer lezen
Een iemand vond dit nuttig
Vertaal recensie in het Nederlands

ReedOn
2,0 van 5 sterren Going to give up on this series. Simon Beckett's ...
12 oktober 2017 - Gepubliceerd op Amazon.com
Geverifieerde aankoop
Going to give up on this series. Simon Beckett's hero, David Hunter is hopeless, hapless, humorless and helpless. To paraphrase one line in the book, Hunter says, "I don't know why I didn't think to pick up the gun on the ground to defend ourselves from the hulking homicidal maniac. But even if I had, I wouldn't have known how to use it." Really!?! God save the Queen! (someone is going to have to). Sorry, but Beckett's "hero" is too much a weenie for this reader's taste.
Meer lezen
Een iemand vond dit nuttig
Vertaal recensie in het Nederlands

Kindle Customer
5,0 van 5 sterren The Calling of the Grave
13 januari 2016 - Gepubliceerd op Amazon.com
Geverifieerde aankoop
An exciting , thrilling mystery full of police procedures that give insight to how crimes are examined and solved. It also shows the tenacity that law enforcement agencies display in attempting to solve crimes. They just keep at it until they finally get their man. In this tale they are being hampered by the fact that the killer they are seeking could possibly be one of their own. This gripping tale is fast paced from the start and will hold your interest through-out. I RECOMMEND...Enjoy!
Meer lezen
2 mensen vonden dit nuttig
Vertaal recensie in het Nederlands

JK
5,0 van 5 sterren Complex and intriguing old-style novel
23 december 2016 - Gepubliceerd op Amazon.com
Geverifieerde aankoop
Someone recommended this book to me, so i ordered - and will order more by this writer, though the plot was somewhat predictable. But it was not so because it was transparent from the start, but for the author deliberately was leaving keys to a reader to follow on his own. There were no new discoveries at the very end, which sometimes leave a sense of been cheated.
I liked language of this book, and overall old-fashioned style.
Any character introduced in this book is a human being, very complex, very living.
And story teller is very humane. And this all is very engaging.
And i look forward to reading more and more by Simon Beckett. thank you for your books!

C L Coffman
5,0 van 5 sterren I'm not one for thrillers or mysteries
13 juni 2014 - Gepubliceerd op Amazon.com
Geverifieerde aankoop
in the 'good old UK'. I seriously find them stiff and cold, pardon the pun. This one however I devoured. The story was fast paced and took you to the many places one would expect, when investigating on the outskirts of London. The characters are written with alot of thought and passion.
Of course there are spots where you get a little inkling as to who the killer(s) might be, but then you're taken off in another direction that leads you to question it.
This is a great story, it's one that would be an excellent read on a rainy, and dreary day; curled up in a blanket and maybe with some tea. Kisses.
Meer lezen
Vertaal recensie in het Nederlands
Ga naar Amazon.com om alle 74 recensies te bekijken 4,2 van 5 sterren
Terug naar boven
Over ons
Verkoop bij ons
We helpen je graag
© 1996-2020, Amazon.com, Inc. en dochterondernemingen