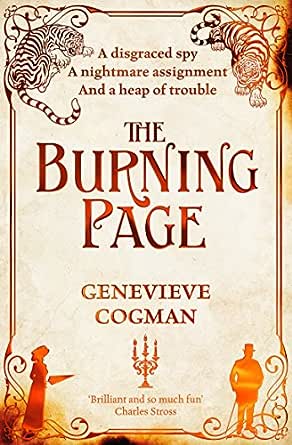 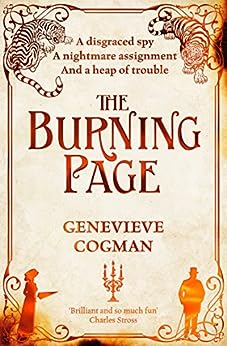 Praise for The Burning Page "Funny, exciting, and oh-so-inspiring, this is the kind of fantasy novel that will have...readers everywhere gearing up for their own adventure."--Bustle "Clever dialog, time-hopping through fun locales, plenty of action, and hints of fresh plotting will have readers looking forward to further library missions."--Library Journal Praise for the Invisible Library Novels

"Surrender to the sheer volume of fun that appears on every page."--Starburst "Such clever, creepy, elaborate world building and snarky, sexy-smart characters!"--N. K. Jemisin, author of The Fifth Season

"A dazzling bibliophilic debut."--Charles Stross, Hugo Award-Winning Author of the Laundry Files "A breath of fresh air....A book in which to wallow."--The Guardian (UK) "Written in a similar vein to Deborah Harkness's All Souls trilogy...contemporary meets fairy-tale in this novel."--The Big Issue

The third title in Genevieve Cogman's clever and exciting The Invisible Library series, The Burning Page is an action-packed literary adventure!

When it's your job to save the day – where do you start?

Librarian spy Irene has standards to maintain, especially while on probation. And absconding from a mission via a besieged building doesn't look good. But when her escape route home goes up in flames, what's a spy to do? However, it seems Gates back to the Library are malfunctioning across dozens of worlds. Worse still, her nemesis Alberich is responsible – and he plans to annihilate the Library itself.

Irene and assistant Kai are posted to St Petersburg, to help combat this threat. Here Alberich emerges, as Irene tries to save her friend Vale and foil assassination attempts. Then one incredibly dangerous opportunity to save the Library emerges. Saving herself would be a bonus . . .

Katherine M.
5,0 van 5 sterren Not only fast pace but new dangers in every chapter!
15 januari 2017 - Gepubliceerd op Amazon.com
Geverifieerde aankoop
Irene is back and better than ever! The author has really improved her pacing for this book. This is a fast pace adventure with something nefarious happening in every chapter. Alberich is threatening to destroy the library. Irene must navigate the threat while completing her book retrieval with Kai who is back to assist her. Our favorite detective Vale is facing a crisis of his own and of course Singh does not approve of Irene's involvement. This book is mostly set in Vale's world and introduces new characters like werewolves but also more details about the library and a book retrieval in alternate Russia. With Kai back we learn more about him and dragons. Irene manages to maintain her calm in the face of multiple threats. If you enjoyed the previous books you will be pleased with the wild ride in this one
Meer lezen
5 mensen vonden dit nuttig
Vertaal recensie in het Nederlands

Austine @ NovelKnight Book Reviews
5,0 van 5 sterren One of My Top Recommendations for the Year
17 februari 2017 - Gepubliceerd op Amazon.com
Geverifieerde aankoop
Upon finishing The Burning Page, I had the overwhelming urge to scream and hug the book to my chest. Because I am slightly more dignified than that I settled for silent sobbing and petting the book because now I must wait until the next one releases.

Because OH MY GOODNESS we’re getting 2 more books!

The Invisible Library series happens to be one of my new favorite series (if you doubt me you can read my reviews of The Invisible Library and The Masked City). Librarian. Spies. Just let that sink in for a minute. Oh, and dragons. That’s a thing. The Burning Page didn’t disappoint as Irene and Kai are off once more with the stakes higher than ever.

In the last book, we met the devious Alberich, an ex-Librarian hell-bent on destroying the Library. He and Irene have a score to settle and he isn’t backing down. But Irene’s on the shit list at work, stuck with the more dangerous missions that no one else wants. Irene isn’t the sort of woman to let that stop her from doing her duty, though, and it doesn’t take long for chaos to erupt once more.

There’s a lot going on this time around as the danger of Alberich’s looming attack approaches. So much, in fact, that my first observation of Cogman’s work back in book 1 was far from the truth. Instead of description bogging down the story, The Burning Page moves fast. REALLY fast. I’m not sure I breathed through my binge-read of it. Just as the characters were thrown into one situation or another, growing increasingly worse, you’re right there with them.

I loved Irene. She’s one of my favorite fantasy heroines. I mean, she’s a Librarian spy. That’s pretty badass. I think her character did suffer a bit this time around because of the constant action. It’s her story, but there isn’t as much time spent with the rest of the cast which is something I really enjoyed in the previous books. Though there was one attempt at a romantic interlude between her and someone-not-Kai and it felt really out of place for this book (and the story in general) as there hadn’t been anything more than friendship developed before this. I also want to know more about her parents. They came up several times in this book and we really don’t know all that much about her history so I have my fingers crossed that it’s going to play a big role in one of the next 2 books.

Now for the last couple books, Irene and her trainee Kai have been going on ALL the adventures. And the pair of them make an excellent team. SO much so that I ship these two harder than I have a fictional couple in a while. They’re not even a thing! (Yet. I have hope still.) I don’t even know if they will be but if this book is any indication, my dreams are starting to shatter. Kai didn’t really get as much page time in The Burning Page. To be fair, he just had a whole book based on his rescue. But their detective friend Vale played a somewhat larger role in this installment. I like him, a lot in fact. He’s the alternate world Sherlock. But I also wanted more Kai. End fangirl complaints.

By the end of this book, I had been expecting the story to truly end (this was before I heard that there would be 2 more books in the series). And for the most part, this book could have been a solid ending. Maybe with another chapter to wrap up the rest of the storylines but otherwise I could’ve been content with it. The Burning Page had that finality vibe to it that you get with the end of a series, when all the action builds to the finale. So I’ll be interested in seeing how Cogman ups the excitement with the next ones as this book is a hard act to follow.

If this series hasn’t been on your radar, it should be! One of my top recommendations for the year!

Dragoness
5,0 van 5 sterren Fun but please develop the Metaphysics more!
13 maart 2017 - Gepubliceerd op Amazon.com
Geverifieerde aankoop
What Harry Potter Fans should read after they grow up! Reminiscent of JK Rowling's style in terms of fast-paced action, world-building, magical creatures, and sheer outrageousness! Like JK Rowling, this author introduces too many characters and expects us to remember them from only a physical description and snippets of dialog. Writing 101: What makes characters memorable is getting to KNOW them as real people! Show us their thoughts! or at least some personality!

Thankfully, the main characters did have a lot more depth than the HP characters. There's a smart, strong female protagonist who can take care of herself, thank you very much, and we are privy to her thoughts for the most part. There's also a really cool dragon whom I'd like to get to know better (hint hint).. And, the Fae characters are always fun, especially Silver,

That incident with Vale seemed kind of slapped together, Give us more insight into the characters' feelings, if you're gonna throw in something like that.

I'm still giving it 5 stars though, because I thoroughly enjoyed it. (Books don't have to be perfect to get 5 stars - just enjoyable page-turners.)

(Very slight spoiler alert only for those who haven't read the first 2 books in the series.)

All 3 books in this series are quite fun, but I especially appreciated that the author is developing the premise which she had only hinted at before - that the archetypal energies in the books actually hold the fabric of the universes together. Cool idea and actually quite true, in a metaphysical sense. I hope she develops this further in the next sequel!

The author could easily write 10 more books with these characters, because the universe she has created is so open-ended. PLEASE GIVE US MORE, I'd love to see the stories mature, like fine wine, away from being just a romp with a bit of metaphysics, to being more deeply metaphysical with a bit oWhat Harry Potter Fans should read after they grow up!f romping (after all, we've already had alligators, spiders, hornets, snakes...um...ok). Develop the idea about the books holding the worlds in balance...make realities shift more as the characters shape their realities...make stories and characters come alive and interact with reality...(You know what I mean...like in The Neverending Story, but for grown-ups!) The author is hinting at all this and I'd love to see these ideas taken to the next level!