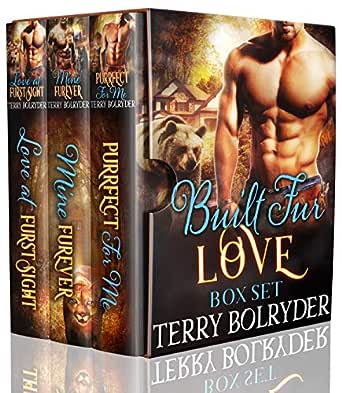 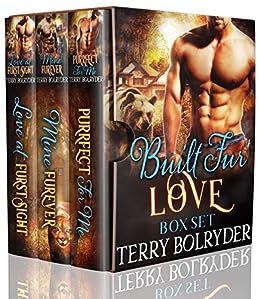 For lovers of steamy, exciting, insta-love romance! When three sexy shifter builders travel to the remote, beautiful town of Silver Lake, love and adventure are sure to follow!

Contractor Garrett Wilson is huge, handsome, friendly to everyone he meets...and a grizzly bear shifter. When Dawn Wilson calls Garrett to build her a house, the beast inside him demands he drive out to the middle of nowhere to find his mate. Between steamy kisses and hot nights in the work trailer, Garrett is determined to win Dawn over. And when danger comes to silver lake, anyone who threatens Garrett's mate will find out that sometimes Teddy bears have the most dangerous bite.

Grumpy alpha wolf Grayson Carver is determined to help the ramshackle local wolf shifter pack while his friends play catch-a-mate. When researcher April Nielson shows up to study recent wolf findings, Grayson knows he should send her away. Instead, his wolf has other ideas. Like mating the sexy little human as soon as possible, kissing her under the stars, and fighting off anyone who might threaten her.

Purrfect For Me
Hunter Raines is restless. Now that his friends are mated, the cougar inside him is pacing, ready for the next adventure. But everything changes when curvy, sweet Kelly walks into the bar, hiding secrets and radiating fear. Hunter's cougar is ready to pounce on whatever is threatening her, and Hunter is pretty sure that he just found a reason to stay in Silver Lake forever.

VaWineLover
5,0 van 5 sterren I loved them!
21 september 2019 - Gepubliceerd op Amazon.com
Geverifieerde aankoop
I read all these books as ARCs from the author. My reviews were voluntary. I ended up buying some of them after they were released. I now own the box set.

Garrett has come to the middle of nowhere to build a house for the woman he is sure is his mate, even though he has only ever talked to her on the phone. Being a bear shifter and working with his two closest friends, a wolf and a cougar, he has traveled and built houses for some of the richest people around, but none of those houses mean as much as this one. With this one he hopes to impress and win his mate. Then he plans to move into it with her and raise a family. Now he just has to convince a human woman that it is possibke to fall in love at first sight, explain to her about shifters, and convince her to be his forever. Easy, right?

I liked this second book in the Built Fur Love series. Grayson is a wolf shifter who is trying to help out a pack that isn't his in order to atone for what he feels is his failure to save his own pack years ago. When a human female comes around asking about wolf sightings, he knows he will have to protect her from the other wolf shifters who are not so good with any humans, especially not ones looking for wolves. When he realizes this feisty woman is his mate all bets are off if anyone hurts her, but how is he ever going to reveal what he is to someone who doesn't even know his kind exist?

April is in the area to look for a wolf pack that may or may not even exist. She would love the chance to find, study, and protect her very own pack. She is worried that if she can't do her job right the government will send men with guns to look next. She has no idea what she is getting in for with the good-looking, ex-military type that seems to have attached himself to her, but he is helpful and good company.

I will not ruin the story for you. Enjoy. (I actually ended up buying this one!)

Purrfect for Me 5 stars

Great story. Hunter is starting to feel like a literal fifth wheel now that his two closet friends have found their mates and settled down. When he meets Kelly at the local bar and hears the bartender cautioning her about her choice of homes being questionable, he decides he has to check on her. He is not sure why his cougar is so interested in this woman other than she is afraid of something.

Kelly has come to this small town in the hopes of shaking her stalker. Her bear stalker. Her family and friends don't believe her story about the bear that is following her. She has a small hope that it won't be able to follow her this far, of course she doesn't know about shifters. Hunter convinces her to let him work on her house and make it safe for her. It isn't long before he is hoping to to live in it with her. First
Meer lezen
Een iemand vond dit nuttig
Vertaal recensie in het Nederlands

Kindle Customer
5,0 van 5 sterren Amazing Trio of builder shifters stories finding their mate
10 oktober 2019 - Gepubliceerd op Amazon.com
Geverifieerde aankoop
Love at Furst Sight is about Garrett is the owner of a construction company, a bear shifter, and has two friends that are a wolf shifter and a cougar shifter. Garrett and his crew meet Dawn on the land at her grandfather willed her.
Not until dangerous around Dawn that she believed that Garrett is her mate. What would the outcome be once the dangers have settled?

Purrfect for Me is about Kelly who is an artist, afraid of a stalker bear, and feels very alone in spite of her family. Hunter is a cougar shifter who meets Kelly. She is very afraid and fears this stalker ferel bear. Will Hunter and Kelly solve the problem of the bear and find love?

I feel that a reader must read these books as a box set to understand what drives these three friends. And that is that they are family despite their differences. The characters are relatable, uncertain I'm telling their mates who they are, and sexy. The plot is different and unique for each book but still intertwine to series as a whole. I love the stories written by this author because no two are like.

Highly recommended for an enjoyable read.

Steph
5,0 van 5 sterren Loved them all!
20 september 2019 - Gepubliceerd op Amazon.com
Geverifieerde aankoop
I've read those books when they first came out and I'm so happy they've been put in a book set! Each stories have fascinating plot, with moving characters that will get you immerse in their stories as your turn the pages. Some parts will make you smile, while other keeps you on toes and you might wan to keep a fan close because some part are blazing hot.

There is no cliffhanger so you can take you time and appreciate each book on it's own!
Meer lezen
Vertaal recensie in het Nederlands

Kindle Customer
5,0 van 5 sterren Built For Love box set by Terry Bolryder
20 februari 2020 - Gepubliceerd op Amazon.com
Geverifieerde aankoop
Happy I picked up this fantastic box set by Terry Bolryder!💖 Her characters are absolutely heartwarming and thourghly enjoyable reading for your next read!😍 She brings such heart and soul into their interactions with their story and pulls you into their interactions with each other and everyone around them! I'm Highly Recommending that you check out this fantastic box set!💖
Meer lezen
Vertaal recensie in het Nederlands