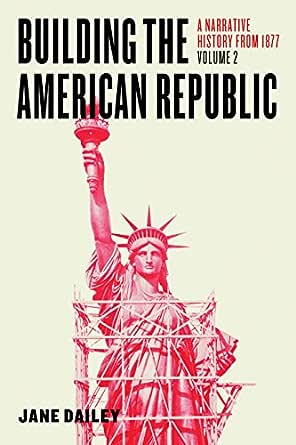 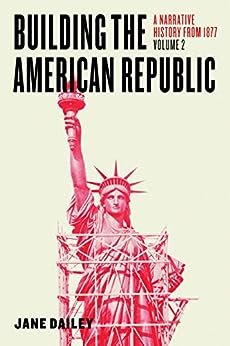 Building the American Republic combines centuries of perspectives and voices into a fluid narrative of the United States. Throughout their respective volumes, Harry L. Watson and Jane Dailey take care to integrate varied scholarly perspectives and work to engage a diverse readership by addressing what we all share: membership in a democratic republic, with joint claims on its self-governing tradition. It will be one of the first peer-reviewed American history textbooks to be offered completely free in digital form. Visit buildingtheamericanrepublic.org for more information.

The American nation came apart in a violent civil war less than a century after ratification of the Constitution. When it was reborn five years later, both the republic and its Constitution were transformed. Volume 2 opens as America struggles to regain its footing, reeling from a presidential assassination and facing massive economic growth, rapid demographic change, and combustive politics.

The next century and a half saw the United States enter and then dominate the world stage, even as the country struggled to live up to its own principles of liberty, justice, and equality. Volume 2 of Building the American Republic takes the reader from the Gilded Age to the present, as the nation becomes an imperial power, rethinks the Constitution, witnesses the rise of powerful new technologies, and navigates an always-shifting cultural landscape shaped by an increasingly diverse population. Ending with the 2016 election, this volume provides a needed reminder that the future of the American republic depends on a citizenry that understands—and can learn from—its history.

law prof
5,0 van 5 sterren A wonderful contribution -- amazingly, free on line!
25 januari 2018 - Gepubliceerd op Amazon.com
Geverifieerde aankoop
A remarkable account of our nation's history from 1877 to the present. And the most extraordinary thing about this work is that it is FREE online. For those interested in American history, and especially for teachers looking for an accessible, thoughtful, and challenging American history textbook for students, this free two volume work is -- quite literally -- priceless! It is no surprise that the New York Review of Books gave the publication of these volumes a free two-page centerfold spread in its January 18, 2018 issue.
Meer lezen
5 mensen vonden dit nuttig
Vertaal recensie in het Nederlands

William Divale, Ph.D.
5,0 van 5 sterren A true understanding of the American Republic
23 maart 2018 - Gepubliceerd op Amazon.com
Geverifieerde aankoop
This is a great book on the American Republic. It is more than just a history - it shows how are values were formed. Also, we can see much of the past in the president. For example, compare President Trump with Anthony Jackson, the VP who replaced Linclon. Also in the 19th Century, Repbulicans were like todays Democrats and vice versa. I am now reading Vol. 2. The above refers to Vol. 1. Wm. Divale, Ph.D.
Meer lezen
Vertaal recensie in het Nederlands