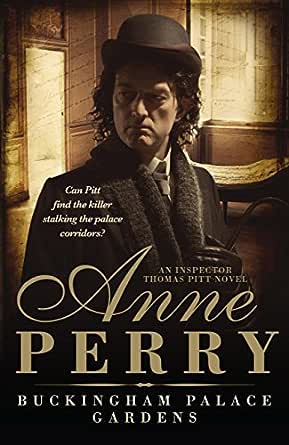 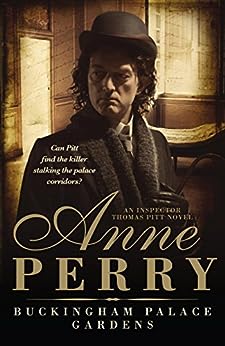 Can Pitt find the killer stalking the palace corridors?

In the twenty-fifth compelling crime novel in Anne Perry's bestselling Pitt mystery series, Inspector Thomas Pitt must navigate the upper echelons of society if he is to find a murderer bold enough to kill in Buckingham Palace. Perfect for fans of C. J. Sansom and Sherlock Holmes.

Early one morning, Inspector Thomas Pitt is awoken by a message from his boss, Narraway. A maid has been murdered. The maid worked at Buckingham Palace and Narraway needs his most trusted man to deal with the investigation. The suspects are narrowed down to a group of guests, meeting with the Prince of Wales to discuss the funding for a huge project: the Cape to Cairo railway. If the murderer isn't found, the Queen will veto royal support for the scheme. It rests with Pitt to solve the murder - in doing so he must reconcile his own concept of justice with those who feel it is within their right to make their own laws, whatever the consequences.

What readers are saying about Buckingham Palace Gardens:

'Keep you guessing until the end'

Linda Yezak
3,0 van 5 sterren Unsure of the mystery, but loved the characterization
9 februari 2012 - Gepubliceerd op Amazon.com
Geverifieerde aankoop
Buckingham Palace Gardens is a straight mystery, meaning it engages the mind more than the adrenaline glands as a mystery/thriller or mystery/suspense would. I haven't read a mystery in years and am embarrassed to admit I'm out of practice. I jumped around from character to character in my thoughts of who slashed a prostitute to death inside the royal palace. Because I'm out of practice, I can't quite pinpoint what it is about this novel that failed to satisfy me. It could be nothing more than I'm not British and couldn't pick up on the clues presented in the very proper dialogue, or it could be that the men involved in the crime were arrested based entirely on conjecture. If I were the prosecutor in the case, I'd be stuck with speculation, because I'd be seriously short of witnesses and physical evidence. A shattered this, a monogrammed that, a mysterious character impossible to identify--add these to potential witnesses who are reluctant or not credible, and I'd have a flimsy case indeed.

Oh well. As the old legal maxim goes: If you can't pound the facts, pound the podium.

Because this was one of the books used to illustrate character in Donald Maass's *The Fire in Fiction*, it was one of the books added to my "to read" list--as are all the books in his how-to. Perry's mystery novel is found in Maass's section in the first chapter called, "Cutting Heroes Down to Size." I can't agree with him that Perry cut her hero, Thomas Pitt, down to size, but instead elevated him above many of the other characters occupying a higher social status in British society. She gave him a moral superiority which I appreciated because he wasn't arrogant. He had his standards and refused to be swayed from them, even if the results put his life or his family's in peril.

Perry's characters in general were fascinating. She did an incredible job of illustrating the societal pecking order in Britain and the parallels from one caste to another. From the simple prostitute to the Prince and Princess of Wales, everyone is represented either through the characters themselves or through their attitudes toward other members of society. For this alone, the book is worth reading and, for writers wanting to improve the craft, studying.

CaroNiki
3,0 van 5 sterren Not what I expected.
29 augustus 2011 - Gepubliceerd op Amazon.com
Geverifieerde aankoop
I've read many books by Perry and although I like her narrative very much and I enjoy the way she creates the ambience in her novels, she has made me think that Pitt is a very lousy investigator.

In this book there were so many things that where lying there and were not asked about (and precaution is not an excuse because Perry makes Pitt even go to the Prince when he thinks he needs it), and it showed that a guest and even Gracie are better than him when investigating.
Many times she makes Pitt think more about the consequences of his acts than about the investigation itself.
At the end he does not make great collaborations in solving the cases and the greatest ideas come from Charlotte, Vespasia and this time Gracie.

Spoiler alert (If you have not read the book I advise you to not continue reading).
When wrapping the case there were loose ends: how the murderer did what he did with the bodies if at the beginning they say his time was accounted for?. How the murderer knew the Queens rooms?, why was it that the first suspect was going to be sent to a mad house without trial and then the same thing was not going to be possible with the murderer?.
Why did they never look for the women who accompanied the victim?, why the victim was never identified by anyone she knew?, how come he knew from early on about the "buckets of water" and never inquired about it?. When he finds clues he does not follow upon them (Gracie does!).
And many many more lose ends.

To me it was an interesting book and the description of personalities were finely done, but left a lot to be desired by what she shows to be the talent of the investigative forces.
Meer lezen
Een iemand vond dit nuttig
Vertaal recensie in het Nederlands

KQuilter
5,0 van 5 sterren Gracies Shines!
29 maart 2008 - Gepubliceerd op Amazon.com
Geverifieerde aankoop
I first became familiar with Anne Perry's two Victorian series about a year and a half ago. I have since read each of the Charlotte and Thomas Pitt novels as well as the Monk series. I received my copy of Buckingham Palace Gardens earlier this week and finished the book within days. For Perry fans, this is Classic Perry. One follows Thomas Pitt as he unravels the mystery within the Palace. What's different with this novel is that it really does primarily take place within the Palace itself during the space of about a week, give or take a few days. I have no idea where the "Gardens" part comes in, as there is no real garden scenes in the book. Would rather have the book titled "Buckingham Palace Prison" to capture how the characters felt. I also want to learn more about Princes Alexandra from the scenes in the book. Gracie SHINES through on this story. She is courageous, she's questioning, she's a detective here. What did I miss in this book? I missed the continued exploration of the relationship between Gracie and Samuel Tellman (Would have LOVED reading what he thought of Gracie at Buckingham Palace! Wished he could have sneaked in to see her disguised as a delivery man or something.), I missed Aunt Vespasia's more meaningful involvement... and of course, the assistance of Charlotte. It is a good story, worth the read, can't wait for the next book!

Amazon Customer
5,0 van 5 sterren Very good!!
9 september 2019 - Gepubliceerd op Amazon.com
Geverifieerde aankoop
I like this novel very much. It is my favourite at the moment. Well writen. Excellent ambientation and a very twisted plot. I recommended
Meer lezen
Vertaal recensie in het Nederlands