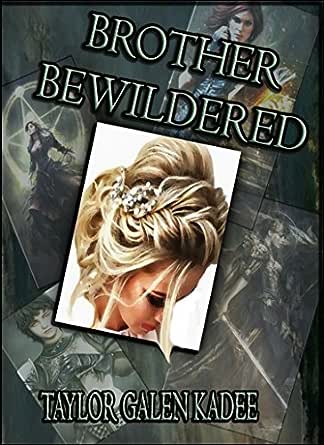 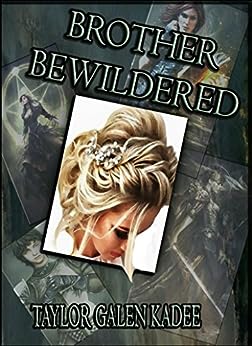 It's the story of a family and the struggle for power. What would you do to seize the crown?

Readers say, "The Shattered isles now enters the pantheon of my favorite books" and describe Brother Bewildered as full of "humor, kindness, battles and plots."

While the men march off to war, Serren, still trapped in the body of a teen-age girl, struggles to find his place in a world that values him only as a pretty face. His sister, who stole his sex, his name and his crown, reigns as king, establishing her rule, but many refuse to accept her as king and rise against her.

Plots are hatched and schemes uncoiled as even the gods seek to determine the future of The Shattered Isles.

It's an epic fantasy adventure with a gender bender twist. This is the second in the series. It can be enjoyed on its own, but is best appreciated after reading the first book. This book includes portrayals of sexual situations. There is also smoking and drinking, so the school librarian will not approve!
click to open popover

Alexia
5,0 van 5 sterren Game of thrones with a nice twist
17 juni 2018 - Gepubliceerd op Amazon.com
Geverifieerde aankoop
Did you ever wonder what would happen if one of the most manish hero of the Game of Thrones series was suddenly turned in a fair maiden ? This book gives a interesting and pleasant answer to this question. Ok, to be more accurate, Brother Bewildered universe is not as bitter and ruthless than Game of Thrones's one. It's light fantasy, not dark fantasy, and believe me, it's better so. It gives some room for humor, kindness, and you still have the epic battles and the plots... And even better, you have Seren, the former tough boy unwillingly turned in the most delicate princess. Learn about his/her adventures as he has to learn to be one of the girls. His anger, his despair, his shame, his surrender, his consolation, his joy, and the first feelings of his new girl heart.
Meer lezen
3 mensen vonden dit nuttig
Vertaal recensie in het Nederlands

Amazon Customer
5,0 van 5 sterren Prince becomes full princess but how will she survive this predicament?
21 juni 2019 - Gepubliceerd op Amazon.com
Geverifieerde aankoop
I'm love this second story serren/serrenina pattenia zikaster annya the former Queen and all rest are going through hard times pattenia leading her Knights and soldiers to stop the Evil Queen Mother and the other Lords from taking her throne while bringing the goddess order back and giving women equal rights as men do to be who they want to be. And the Queen Mother annya trying to make her children get along make peace and hopefully find a cure for her son to be turn back into a and man and serren not being the woman princess serrenina.and the evil queen trying to use her son for own scheme and take over the kingdom for herself.and zikaster he is prophesied to take over Kingdom and take serrenina as his queen if he is not killed soon I can just imagine serren walking down the aisle in a wedding dress and in chains being forced to marry zikaster how will be her husband.and of course serren now serrenina he is trying to cope and get past his female predicament and look for a cure to turn him back into a male and he has no and now we are clue what may happen to him if he doesn't get Stronger soon and learn Magic to defend himself.I hope his sister will tell him soon about the vision with the big surprise that serren/serrenina has in store for pattenia when they talk again. I bet anything that zikaster by way of spell or some other means is the reason serren did that to him. This is a awesome story I can't wait for the third one to come out soon if you can please tell me.
Meer lezen
Vertaal recensie in het Nederlands

Ashley
5,0 van 5 sterren Worthy Sequel to Brother Bewitch with a cliff hanger
25 juni 2018 - Gepubliceerd op Amazon.com
Geverifieerde aankoop
The Lee Corcoran series by Daring Diane, The McComber Switch by Karen Singer, The Reluctant Series by Melanie Brown, Peaches by Angela Rasch and Amelia R., and now The Shattered Isles Books enters the pantheon of my favorites in books that cater to my tastes.. This is a worthy follow-up to Brother Bewitched and takes the story in new directions and leaves us wanting more. I eagerly await Taylor's 3rd installment that hopefully will wrap this up in a positive manner with Serrenina coming to grips with her new reality. This is a great series, and takes the time to "flesh" the characters out, and, let them evolve naturally...ok in this case with a little help from magic.
Meer lezen
Een iemand vond dit nuttig
Vertaal recensie in het Nederlands

Amazon Customer
4,0 van 5 sterren Nice Continuation of Book 1
20 oktober 2018 - Gepubliceerd op Amazon.com
Geverifieerde aankoop
A nice read. Serren continues to be conflicted about his new life and love(s), and the loss of his old life, and settles on an novel way to try to get back his manhood. Pattenia leads her army in the field, but finds she must undertake a dangerous mission into Maxis' ancient temple, with only Actonia to assist, where she encounters the last person she could ever have expected.
Meer lezen
Vertaal recensie in het Nederlands

R Masters
5,0 van 5 sterren One of my favorites
12 september 2018 - Gepubliceerd op Amazon.com
Geverifieerde aankoop
I'm a huge fan of both books in this series, they are some of the best gender swap fiction that I've read. Book 2 is a little bit less squirmy for the princess as she has already adapted quite a bit, but features a great arc for the new King and all involved.