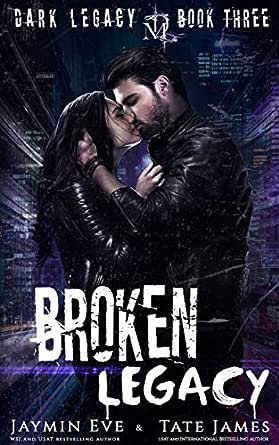 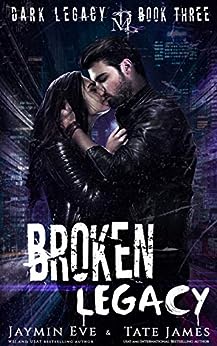 They're my boys now - the four heirs of Delta. Together we’re a team ... a family.

Five broken, brutal, possibly sociopathic people, and we are all that stands between the world and the powerful, corrupt Delta corporation.

We have no idea what we’re doing, but somehow we are determined to stop them. Permanently. We just need leverage ... irrefutable evidence of their corruption.

And we need it now. Before the vote that will change everything.

Only there are a few other issues to deal with first. Dante in prison for murder, blood coated roses showing up on my doorstep, and my bio-mom reaching all new levels of insanity.

For the first time we might be completely out of our depth ... but we won’t give up.

*This dark contemporary romance features one girl and four sexy, dangerous boys but is NOT a reverse harem.*
Includes a sneak peek of chapter one of Princess Ballot.

Amazon Reader
3,0 van 5 sterren Missing parts?
1 augustus 2019 - Gepubliceerd op Amazon.com
Geverifieerde aankoop
I really enjoyed this series. This book felt rushed, though. Like toward the beginning they hinted that a spicy scene was coming up, but then just lightly mentioned it in last tense on the next page. The writing style annoyed me a bit at times. Riley just progressed more and more info a spoiled brat attitude the longer the story went. Her "poutyness" got on my nerves A LOT. And her relationship with Dante just never made sense. I felt like she got over stuff way too fast. I mean, her whole life was a lie, but as long as they were sorry, then cool. Let's all hold hands after almost being raped and cut up again.
I just wish she had been a bit more....real.

Kindle Customer
2,0 van 5 sterren Series Review
27 augustus 2019 - Gepubliceerd op Amazon.com
Geverifieerde aankoop
I was underwhelmed and mostly skimmed this last book. The series is full of tropes that don't carry because there's little actual plot or character development. Riley is full of dumb decisions and tears. She literally cries every chapter. She has tragedy in her life, but it gets pushed out by the shallow and petty.

One of the hardest things to deal with was the insta love. One, the girl is 17. Two, she ends up living with him - why? She's 17! She can't even do her own dishes, orders out, and probably can't do her own laundry but ok let's put her in an adult relationship and pretend that's gonna work. This girl, who falls apart at every little thing, living with a guy. Like, at least try and make some of this believable.

Time was all over the place in these books, too. The story is referenced as taking place over months but if you actually count out the time that's not right. For me, if I can't trust the timeline, I lose interest in the book.

Let's also talk about the disturbing messages of the book. Like equating dominance with creepy possessiveness. At one point she is actually grateful he gives her a choice! Um, no, making a choice is your right as a human being; that's not a "honey that's so sweet" moment. Instead of sticking up for herself, she basically screams at him and then sleeps with him in an endless cycle of bimbo. Cue the eye rolling.

Another disturbing message: that all women dislike each other. Uh...what? Seriously, Riley has only one female friend. The rest of the women in the books are shrews who are "just jealous of her" and try and tear her down. One even arranges a gang rape that thankfully doesn't go all the way. This view that women are catty B's with nothing better to do but drool over men and tear each other apart over them is so misogynistic. It's small comfort that Riley calls a couple girls out in the final book for spending their time working against other women. Too little to late, especially when she's just as bad, calling them names and making them feel useless.

The plot is basically a ridiculous series of Riley getting injured, getting rescued by the guys, sex, fighting, and kidnappings. This girl is TSTL for real - not taking death threats seriously, or getting drunk around strangers, or, you know, not having or developing any real survival skills outside that half a day in book 1. To be honest, she doesn't have any skills regardless. One could count her driving if it wasn't clearly a plot device to try and make her seem interesting. And it bugs me that she refers to adult men as "my boys" all the time. She doesn't own them and their men, not boys. Pet peeve of mine.

I'll admit to disappointment in the series. I had hoped it would be better. If it had to have tropes, then I hoped for plot twists and solid world building. Instead, I got a shallow read. If you like the tropes and dontr need as much plot as me, you might enjoy this series.

Sandy Knox
5,0 van 5 sterren HOLY MOTHER OF BOOK LOVERS!!
9 augustus 2019 - Gepubliceerd op Amazon.com
Geverifieerde aankoop
This series was abso-freakin-lutely amazing! I LOVED IT! The suspense got so intense I couldn't read fast enough. More than once I caught myself holding my breath. I love the way these 4 guys Beck, Dylan, Evan and Jasper go from hating Riley to loving her unconditionally. Together they all made her a stronger person. I loved how Riley would give it to Catherine Debitch. Riley's snarky smart ass comments had me laughing out loud. Jasper was a cracker too. Dylan was always so serious it was actually kinda sad knowing he was in love with Riley but she was madly and irrevocably in love with Beck an HOLY CRAP! Did they rock my world. These two were so smokin hot. I'm talkin set your crotch on fire smokin hot. I thought my Kindle was gonna catch on fire.The shock factor in this series was at times mind blowing . The things that Richard revealed about Catherine was WOW! I'm tickled to death at the way things turned out but couple of things are still bothering me. After all is said and done, I would have liked to have known if Riley and Richard have any kind of relationship at all. And I wanted to see Richard give the guys Oscar's diaries and they decipher them to figure out where the vault was. I EXTREMELY recommend this series to everyone! I loved every minute of it.
Meer lezen
5 mensen vonden dit nuttig
Vertaal recensie in het Nederlands

Bookish Speechie
5,0 van 5 sterren I Need More Of These Delta Heirs!!
31 juli 2019 - Gepubliceerd op Amazon.com
Geverifieerde aankoop
I have been slayed! This series has crazy over the top drama and angst. Some of the conflicts are freaking bonkers and totally unbelievable BUT I’m addicted to it SO BAD! There are so many messed up situations that my eyes bug out at times yet I continue to turn page after page and devour chapter after chapter of this delicious hot mess!

The writing is superb, and the alpha-holes are beyond yummy! These characters need some serious therapy, but have such a deep sense of loyalty and protectiveness that I easily forgot their moments of stupidity in regards to Riley aka Butterfly...

I dare you to read this series and not get hooked into this twisted world of power, greed and violence sprinkled with rare but treasured moments of passion and unconditional friendship. I hope beyond hope we get Jasper, Evan and Dylan’s stories!

Kindle Customer
5,0 van 5 sterren Action packed conclusion!
31 juli 2019 - Gepubliceerd op Amazon.com
Geverifieerde aankoop
Broken Legacy was the perfect conclusion for this series. Riley and Beck took us on an exhilarating ride to the finish. There were quite a few obstacles before getting there obviously. Learning more about Catherine, dealing with the feelings of betrayal by Dante (but hey, I never doubted him for one second), the threat of Delta and Huntley while there's a serial killer who has set his sights on Riley. Yes, I tore through this book like an addict needing his next fix!

I loved this series so much that I even settled for it not being RH, but honestly, I wouldn't have mind being sandwiched by the Delta heirs. I absolutely loved badass FMC Riley, BFF's Dante and Eddy were the perfect addition. And I would happily add Jasper, Dylan and Evan to my harem. But... Jaymin Eve and Tate James made up for it in spades with Beck's alpha possessive behavior. While I'm usually not a big fan of spin-offs (I just miss the main story too much) I wouldn't mind reading more about them all!
Meer lezen
3 mensen vonden dit nuttig
Vertaal recensie in het Nederlands
Ga naar Amazon.com om alle 309 recensies te bekijken 4,7 van 5 sterren
Terug naar boven
Over ons
Verkoop bij ons
We helpen je graag
© 1996-2020, Amazon.com, Inc. en dochterondernemingen