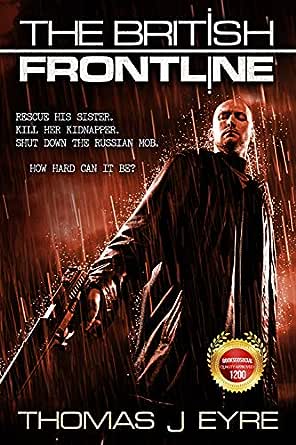 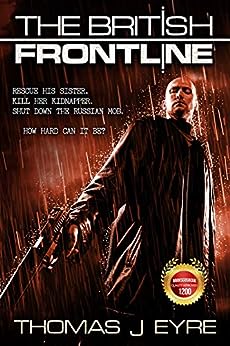 The Russian Mafia picked the wrong girl to abduct. Now Paddy is hunting on British soil, and they are his prey.

The dark forces of the Russian Mafia have launched an assault on the underworld of British society, and the very people tasked with the protection of British Isles, are colluding with the Mafia's hostile intent.

Used to fighting to keep his country safe, Royal Marines Sergeant Patrick (Paddy) Regan, realises there is a war being fought in Great Britain. This brutal conflict is being waged between the Russian Mafia and Britain's organised crime. The rot caused by the Russian Mob's toxic regimen of bribery, intimidation, and violence has reached the very top of Mi5, the British secret service.

What Paddy wants most is to find and rescue his young half-sister, Susie. He knows the Russian Mob abducted her and he's getting zero help from the authorities. He deserts from the Royal Marines, determined to track her down and kill those responsible for taking her. Calling on skills honed in Northern Ireland, Iraq and Afghanistan, he infiltrates their organisation and begins its destruction from within.

Buy The British FrontLine now, and join Paddy and his ragtag army, as they take on the might of the Russian Mafia.

Alex
4,0 van 5 sterren This was a fantastic and very detailed read that really got the blood ...
21 mei 2018 - Gepubliceerd op Amazon.com
Geverifieerde aankoop
Little did Royal Marine sniper, Patrick Regan, know that the war in Iraq would not be the fight of his life. Battle on the foreign sands of the Middle East would pale in comparison to the fight at home against underworld forces that play by their own rules and can come at you wearing any face.

Thomas J. Eyre has written a dark tale that has all the gentle subtlety of burst appendices. He has not held back or toned down the realities of what happens in a war, whether it be on a battlefield or in the streets. The story of Patrick Regan plays out in front of this gritty backdrop as he hunts those who murdered his family and threaten his remaining sister.

This was a fantastic and very detailed read that really got the blood going. The main character would be at home in any Dirty Harry movie and the scenes described in a way where you almost feel the action. I found characterization of Partick Regan especially attractive. In world littered with morally conflicted, wishy-washy heroes, this was a man with clarity of purpose who wasn’t above sidestepping a rule or two…or ten. Those looking for action and a very hero they can get behind, this is the novel for you.

Kindle Customer
5,0 van 5 sterren Great Read
22 september 2018 - Gepubliceerd op Amazon.com
Geverifieerde aankoop
This is the kind of story that grabs you and won't let go. I've not read many war books, but I always enjoy a well wound story that delivers on thrills as this one does. The tension in some of the parts was so well done it was almost too intense. You know those times when you are reading and your neck hurts and then your realize you are gripping the kindle and craning closer to the screen. I was super impressed by how rich Patrick Regan is being the type of man who can do what is needed and yet having a side that is also tender and compassionate.
Meer lezen
Een iemand vond dit nuttig
Vertaal recensie in het Nederlands

Carmen
4,0 van 5 sterren A surprising read
10 juni 2018 - Gepubliceerd op Amazon.com
Geverifieerde aankoop
There were times where I found Patrick Regan to be quite brave, though at other times I thought he sometimes over-reacted a little bit. It was a slight surprise that I enjoyed this book quite a bit more than I thought I would and voluntarily reviewed a copy of this book.
Meer lezen
Een iemand vond dit nuttig
Vertaal recensie in het Nederlands

Priscilla Duane
5,0 van 5 sterren Compelling
8 juli 2018 - Gepubliceerd op Amazon.com
Geverifieerde aankoop
A compelling read, difficult to put down. You are drawn into the dark world that this war hero finds himself in after his return from Afghanistan. This book is action packed from the first page. Descriptive enough that you are drawn into the characters and locations.
Meer lezen
Een iemand vond dit nuttig
Vertaal recensie in het Nederlands