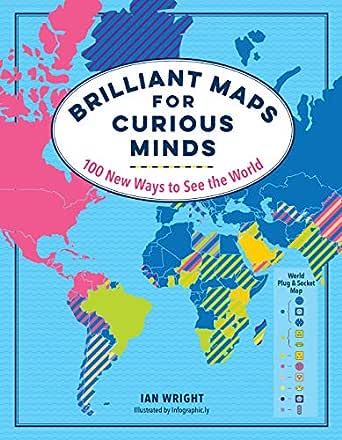 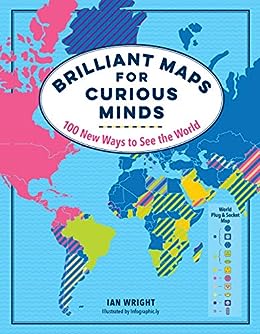 Which countries don’t have rivers? Which ones have North Korean embassies? Who drives on the “wrong” side of the road? How many national economies are bigger than California’s? And where can you still find lions in the wild? You’ll learn answers to these questions and many more in Brilliant Maps for Curious Minds. This one-of-a-kind atlas is packed with eye-opening analysis (Which nations have had female leaders?), whimsical insight (Where can’t you find a McDonald’s?), and surprising connections that illuminate the contours of culture, history, and politics.

Each of these 100 maps will change the way you see the world—and your place in it.
click to open popover

Pop Bop
3,0 van 5 sterren Interesting Enough, But A Lot of Attitude
5 november 2019 - Gepubliceerd op Amazon.com
This book contains some wonderful examples of how information can be displayed graphically. Many of the examples are just color coded world maps that show some interesting fact about how something is distributed globally, but others offer odd or clever ways of looking at facts.

That said, many of the maps will be familiar or at least cover familiar ground. Maybe I'm just being touchy, but there seemed to be an odd bent to many of the maps that offered rather pointed observations about the United States. So, we get a map of murders by country, (U.S. is high), prison population as a percentage of country population, (U.S. is high), casualties of World Wars I and II as a percentage of country population, (U.S. didn't suffer as much as others), climate change denial by state, (boy, those guys in the Deep South must be dopes), non-users of the metric system, (U.S. and two other dopey countries), countries that have had a female leader, (not the U.S., yet), and immigrant population, (hey, U.S., you are a nation of immigrants). All true enough, but not exactly news.

Some of the featured facts are weird, (which countries hold elections on which day of the week; a map of places with the longest names; colors of passports ), but some were worth a pause - countries with no McDonalds, a line just above Toronto below which half of all Canadians live, the only 22 countries that the U.K. has never invaded, all the countries raided by Vikings, all of the countries that have invaded Poland.

On the graphic design side, the maps are split between overlays, (which European countries have to fit into California to match its population), or just color coded world maps. There didn't seem to me much in the way of novel design as such.

So, very much a mixed bag. This book is a collection drawn from the author's Brilliant Maps website, and as such it is meant as an entertainment and a thought provoker. In that regard it struck me as enough of a success to be worth a browse.

(Please note that I received a free advance will-self-destruct-in-x-days Adobe Digital copy of this book without a review requirement, or any influence regarding review content should I choose to post a review. Apart from that I have no connection at all to either the author or the publisher of this book.)
Meer lezen
26 mensen vonden dit nuttig
Vertaal recensie in het Nederlands

Frances
2,0 van 5 sterren You can’t see the middle of most of the maps
11 december 2019 - Gepubliceerd op Amazon.com
Geverifieerde aankoop
The idea of the book is really cool! But it’s difficult / impossible to see the middle of a lot of maps, because they are printed on two sides ... with the fold in the middle. That’s really stupid!!
Meer lezen

Arlene Foster
5,0 van 5 sterren 5 Star
19 januari 2020 - Gepubliceerd op Amazon.com
Geverifieerde aankoop
was sent as a gift and I haven't seen it, but grandson liked it and it arrived on time.
Meer lezen
Vertaal recensie in het Nederlands