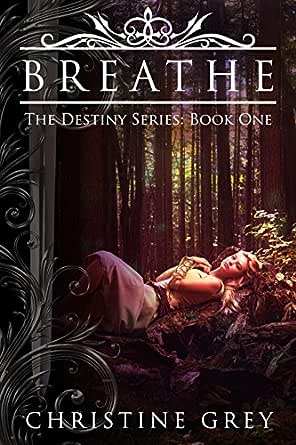 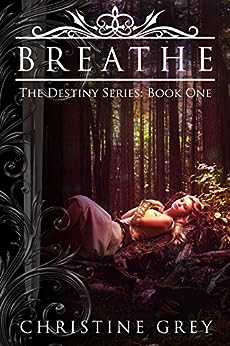 Dearra comes into possession of the magical Sword of Cyrus just as the evil Breken attack her island home. Though her people succeed in driving their enemy back to the sea, one of the invaders remains behind, left for dead by his cruel kin.
Now, Dearra doesn’t know what to be more surprised by, the fact that her sword can speak to her, or that it has imperiously informed her that the handsome Breken warrior is her destiny.
The two are bound together by a chain of events that was set into motion a thousand years earlier, and everything they thought they knew about themselves, their history, and their future is about to change.
click to open popover

Paul from LA
5,0 van 5 sterren A book worth reading.
15 maart 2017 - Gepubliceerd op Amazon.com
Geverifieerde aankoop
I just finished writing my review and was previewing it and boom, it was gone. I get so tired of this type of thing on Amazon. Now, I will see how much of the review I wrote I can remember. I just finished reading Breathe (The Destiny Series Book 1) and I must say, I was hooked from the preface to the epilogue. I hated for the book to end, wanted to keep it going, on and on. This was a great book, there were very few format errors, nothing serious, an easy story to read. I found the characters to be believable, likeable and very well fleshed out. The story flowed smoothly, was full of action, no sex, a little romance and was full of surprises. I love a good fantasy book, and this one did not let me down. In my opinion this is a must read book if you like fantasy. I suggest you get the book, read it and write your own review to tell us what you think. Christine Grey is a good author, with a future and I look forward to reading more of her books. Thank you Christine Grey for the great book.
Meer lezen
7 mensen vonden dit nuttig
Vertaal recensie in het Nederlands

Mark Boyd
4,0 van 5 sterren A Good Fantasy Read...
21 mei 2018 - Gepubliceerd op Amazon.com
Geverifieerde aankoop
This is the first book I've read of this author and despite a slow beginning, a bit of a confusing ending, and some editing errors, I thought the story was great. Grey pens an enjoyable story of a young woman, Dearra, who is a naturally gifted swordsman and chooses to follow the path of a warrior, rather than the more sedentary life of a healer, her mother hoped her to be. Her brother Phillip, Pip as he is called, adores his big sister but is constantly reminded, much to his frustration, that he's still too young to go to battle. Dearra's father, Hugh is the Lord of Maj, the vanguard island they live on and is adored not only by his children but by all those occupying the island of Maj. Lord Hugh's children are his life, as his wife is dead.
Dearra's close friend and sword master Daniel is commanded by an enchanted sword to present it to Dearra as the new rightful master, before a forthcoming attack from their arch enemies, the Breken. The sword, Brin'du Drak'Tir, affectionately known as Brin has long been concealed and revered as a sword of great power among the Maj. The reason Dearra is chosen is mostly unknown to all with the exception of Brin, who tells her it's her destiny.
When Maj is finally attacked, Brin protects Dearra throughout the battle, ending in a face to face encounter with a young Breken warrior, Darius, the son of the Breken chief. Both foes positioned for attack, hesitate as their eyes lock and a connection of sorts is established. Daniel thinking Dearra is going to be killed, bashes Darius in the head, knocking him out. In the meantime, Pip, is captured by the Breken leader and carried away on their ships, for ransom at a later time.
Without giving much more away, the story is about the relationship that develops between Darius and Dearra. Brin who talks to Dearra can also be heard by Darius as the story goes on, creating an often humorous go between with Dearra and Darius. Once into the book the story flows and keeps you involved. Grey does a good job portraying the emotions, hormonal and otherwise between the young warriors and Maj's coming acceptance of the Breken and the planned rescue of Pip.
This is the first book in the Destiny series and a good read for the epic fantasy lover. I have chosen to continue the series and started Book II - Whisper. We shall see what we shall see. So far, thumbs up.

cloudbird
4,0 van 5 sterren Great start!
25 september 2016 - Gepubliceerd op Amazon.com
Geverifieerde aankoop
This is a fun, fast read with some great characters and an intriguing premise ( no spoilers). The world - building is rich in detail and I feel like I could jump right into the culture. The arc of this story is complete while still crying out for the sequel. Excellent start to an exciting series.

The constantly changing point of view takes getting used to, but it allows for deep character development. The two primary obstacles/ threats didn't always feel as urgent as they could ( no spoilers), but the ending was a perfect ride.

Due to romance elements and mild sensuality, I'd target this for teens and up. Don't worry. They keep their pants on.
Meer lezen
5 mensen vonden dit nuttig
Vertaal recensie in het Nederlands

SusieMoon
4,0 van 5 sterren I loved Brin. The humorous satire made the book
12 april 2017 - Gepubliceerd op Amazon.com
Geverifieerde aankoop
I picked up this book because I thought it had an interesting premise, and it does to an extent. The idea of an alien being and a magic sword appealed to me. I loved Brin. The humorous satire made the book. I also thought Darius was okay although I'm not sure how a being who has never seen goodness or kindness could possibly be a knight in shining armor. For me, Dearra was the problem. I'm tired of idiotic young women who don't think and never learn form experience. She's not impetuous; she's stupid. I almost gave three stars, but the other characters were good enough for four stars. Three and a half would have been ideal.. I'm not sure if I'll read the other books in the series, but I may bo see if she matured any.
Meer lezen
3 mensen vonden dit nuttig
Vertaal recensie in het Nederlands

louise hunter(Books All things paranormal and romance)
5,0 van 5 sterren Hell to the yeah,Damn good read ~
18 februari 2018 - Gepubliceerd op Amazon.com
Geverifieerde aankoop
Ooooooooo well hello to the deadly dark and handsome Brekken that brings this book to life
I could feel myself whisked off to the land of Maj
Where I was introduced to to the beautiful people and there homeland
Where women are equal to there men and warriors in the field when they had to protect there land.
Then there is Brin well Brin is just a handful of mystery and feisty with a touch of sarcasm and whit.
He bonds with Dearra the daughter of the lord of Maj. I know there is something special about them both and together they bring humour to the table and fight hand in hand.
In a nutshell I really enjoyed this book and look forward to seeing how this story will play out I have a feeling that the next instalment is going to be action packed full of love and heartbreak and I think some lives will fall apart.

I so need to read the next instalment because I really freaking love this book.