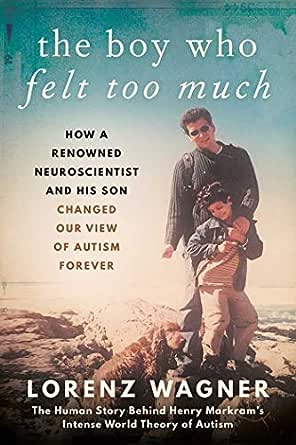 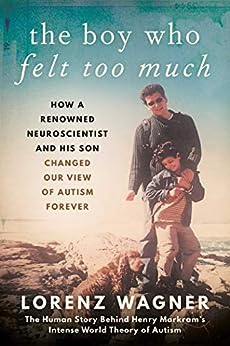 The Boy Who Felt Too Much: How a Renowned Neuroscientist and His Son Changed Our View of Autism Forever (English Edition) Kindle-editie

"Wagner does an exceptional job of mixing biography with complex yet accessible neuroscience. Essential for parents, educators, physicians, and specialists working with children of all ages."--Library Journal, starred review "Lorenz Wagner's book on the remarkable Markrams is, well, remarkable. This is an extraordinary story of noted neuroscientists seeing the world through the eyes of their ASD son and then helping change the way autism is seen and treated far and wide. A tale of love, constancy and groundbreaking research."--Ron Suskind, Pulitzer Prize-winning journalist and author of Life, Animated: A Story of Sidekicks, Heroes, and Autism "A compelling story about one of the world's most brilliant researchers searching to understand his son's autism. A gloriously positive book. Left me with hope for humanity."--David Sinclair, New York Times-bestselling author; professor in the Department of Genetics and codirector of the Paul F. Glenn Center for the Biology of Aging, Harvard Medical School "The Boy Who Felt Too Much tells the story of our accelerating understanding of autism, and it does so via fascinating characters, such as the famous neuroscientist Henry Markram, who is building a digital brain, and Dr. Markram's remarkable autistic son, Kai. It offers a very enjoyable way for anyone to become fluent in the latest theories about autism, including why it seems so prevalent today and what can be done to minimize its most troublesome aspects. This book greatly increased my respect for the condition of autism, as well as the individuals and families who navigate life with it."--Martine Rothblatt, chief executive officer, United Therapeutics Corp "What is so special about this book? It brings together two worlds. Many parents will find themselves in the wonderfully, movingly told family story. At the same time, the book delves deeply into brain research. It is very competently researched, based on studies and clearly and visually told, so that everyone can understand the facts. The book is now on everyone's lips among our parents. It offers encouragement in many places and should be read from our point of view by many parents."--AUTISM (journal of the Federal Autism Association of Germany) "A moving father-son story interspersed combined with elegant science writing about regions of the human brain that are still terra incognita. Thoroughly researched and brilliantly written."--Weser Kurier "A book for all those dealing with autism and those who love good writing."--Süddeutsche Zeitung "By the end of this striking piece of reportage, you've followed not only an unusual family story but also the rigorous, deliberate, but extremely vivid search for knowledge."--Der Falter "A wonderful book."--Anja Burri, Neue Zürcher Zeitung am Sonntag "A thrilling and moving book."--WDR 5 "Thank you for this really interesting and beautiful book."--SR2 "A family portrait with amazing insights."--Technology Review "Author Lorenz Wagner has written an impressive portrait of the family with a focus on the father and has succeeded in making highly complex processes understandable to laypeople. A very interesting read."--Reutlinger General-Anzeiger "Woven in this lively story, Wagner explains what happens in us when we feel and provides fascinating insights into the human brain. A captivating and uplifting book."--Bild der Wissenschaft "The author is really good writer. Wagner interweaves Markram's biography with intimate family sketches and passages on neuroscience and autism research."--Saarbrücker Zeitung "The first time autism has been shown from another side."--Asperger-Autismus.ch "Thank you for this great and extremely important book."--Ella's Blog, Living with Autism "Wonderfully visual. There are few books that can provide both personal and scientific insight into the autism spectrum. This book is able to fill the arc of tension skillfully, excitingly, and at the same time in an entertaining fashion."--Atypical life autism blog "The book is very moving and exciting and can be read like a novel. A brain researcher discovers that his child is autistic, and as readers we see how he gradually learns to deal with it. A journey into a new world."--Familylab "There are two billion people on the planet who are affected by mental disorders, and the drugs that are used today are largely empirical. I think that we can come up with very concrete solutions on how to treat disorders. The mysteries of the mind can be solved--soon. Mental illness, memory, perception."--Henry Markram, TED Talk about the Blue Brain Project, 1.3 million views

An International Bestseller, the Story behind Henry Markram’s Breakthrough Theory about Autism, and How a Family’s Unconditional Love Led to a Scientific Paradigm Shift

Henry Markram is the Elon Musk of neuroscience, the man behind the billion-dollar Blue Brain Project to build a supercomputer model of the brain. He has set the goal of decoding all disturbances of the mind within a generation. This quest is personal for him. The driving force behind his grand ambition has been his son Kai, who has autism. Raising Kai made Henry Markram question all that he thought he knew about neuroscience, and then inspired his groundbreaking research that would upend the conventional wisdom about autism, expressed in his now-famous theory of Intense World Syndrome.

When Kai was first diagnosed, his father consulted studies and experts. He knew as much about the human brain as almost anyone but still felt as helpless as any parent confronted with this condition in his child. What’s more, the scientific consensus that autism was a deficit of empathy didn’t mesh with Markram’s experience of his son. He became convinced that the disorder, which has seen a 657 percent increase in diagnoses over the past decade, was fundamentally misunderstood. Bringing his world-class research to bear on the problem, he devised a radical new theory of the disorder: People like Kai don’t feel too little; they feel too much. Their senses are too delicate for this world.
Alle bekijken
click to open popover

Jeff and Tonya
4,0 van 5 sterren Fascinating Yet Complicated.
19 november 2019 - Gepubliceerd op Amazon.com
I seem to be the first Autistic person to be reading this book, at least from reading the available English language reviews on Goodreads after finishing the book yet prior to writing my own review.

Overall, the story is about Henry Markam, his relationship with his son Kai, and how that led to one of the most revolutionary "discoveries" in modern neuroscience: Intense World.

I personally refuse to call this a "theory" because it is fact - a fact which pretty well any Autistic Adult that can communicate can tell anyone who asks. And through this section of the book, roughly the first 2/3 of the text, this is a SHOUT FROM THE ROOFTOPS level AMAZING book. SOOO many times I wanted to literally go to skyscrapers and shout to the world "READ THIS BOOK AND UNDERSTAND ME AND MY PEOPLE!!!!!". And even with this being something like book 135 or so on the year for me, those level of reactions are indeed rare.

But then we realize that Markram isn't just trying to *understand* Autistics. He wants to "cure" us. Which is genocide. The text tries to couch this and make Markram and his second wife (and research partner) seem more benevolent, but at the end of the day their research is focused on the eradication of my people.

Along these veins, the recommendations the Markrams make about how Autistic children are to be treated is horrible bordering on monstrous - they want a world devoid of any stimuli other than carefully screened, carefully controlled ones, as they believe that to do otherwise is to "trigger" the development of Autism in young children.

I'm not a neuroscientist, but neither am I neurotypical. I may not be able to point to the exact chemical processes within my brain the way the Markrams can, but I can explain what I understand to be happening within my own skull better than most of my fellow Autistics (though there are some far better than even myself at this).

So I have to say, regarding the back 1/3 or so of this book, to take it with about a boulder of salt. The relationship aspects amongst the Markrams seem genuine, and the overall goals of creating a legitimate simulation of the mammalian - and specifically human - brain are commendable and needed. But the post-Intense World proscriptions on how parents should raise their children? Take it about as you would any random stranger offering you advice - do some independent research before you commit to an action, and in this particular case... *ask an Autistic adult*, or better yet: several of us.

Overall a highly recommended yet ultimately flawed book, the front 2/3 of it are simply too good not to recommend the book as a whole.
Meer lezen
28 mensen vonden dit nuttig
Vertaal recensie in het Nederlands

Susanna
5,0 van 5 sterren Unique
20 november 2019 - Gepubliceerd op Amazon.com
Geverifieerde aankoop
What a wonderful book! And what a family: the father a renowned neuroscientist, the mother behavioral scientist, and the son, the lovely Kai, autistic. The fusion of family life and science.

Like the family, this book is unique. It's a family story and a science book at the same time. It touched me and – as a therapist – I learned a lot. I have read it twice, in German and in English (advance copy).

Even though I like the first review written here, I don’t agree, when it says, that Markram wants to 'cure'. For me the book is a plea for neurodiversity, there's a whole chapter about it: “If you listen to what autistic people have to say, on YouTube, in blogs, when you hear that famous autistic woman, Temple Grandin, speak—they don’t want autism to be cured. But that is precisely the first thing that scientists want. And that’s wrong.“ (page 193). It is just about finding the biological reasons for its worst symptoms — panic attacks, for example. „Find out where this fear comes from, if it’s bad for the person, and then try to remedy it. Beyond that: let autistic people be as they are. Their brains are different, but we don’t want the brain of every person to be the same.“ (page 193)

Also Markram's recommendation is absolutely not to withdraw any stimulation during infancy. “Someone said we wanted to lock children in a black box—a complete misinterpretation, the opposite of what we’d written. All we were saying is that they should grow up in a calm and structured environment. Every child needs stimulation, as much as it can bare without feeling overwhelmed.“ (page 159).

What I maybe loved most about this book, is this conclusion: “Henry and Kamila realized that things were upside-down. Instead of dwelling on the supposed mind-blindness of autistic people, we should be discussing our blindness to their needs. Rather than talking about autistic people’s flaws, we need to focus on society’s flaws. ‘We say autistic people lack empathy’, says Henry. ‘No, we lack empathy. For them.’”