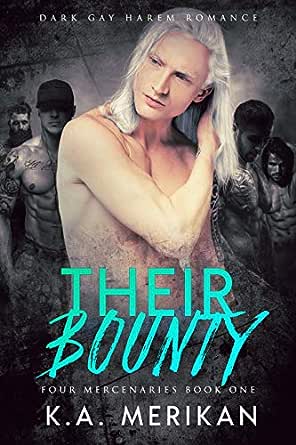 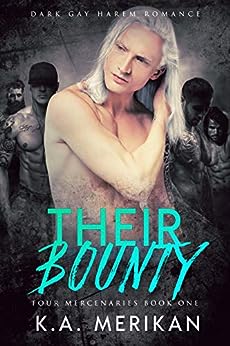 Clover is an orphan and has led a tough and chaotic life. No stability. No money. No friends. He trusts no one.

His already miserable life takes a nosedive when he ends up in the hands of a human trafficking gang. Someone has placed a request for a young albino man, and Clover is to become the property of a mysterious buyer who will stop at nothing to satisfy their depraved desire. Clover’s fate seems sealed until four bounty hunters appear to take out his captors and accidentally save him.

The four mercenaries want to move on, but when Clover pleads for protection, they offer it to him at a price. In the beginning, the arrangement is all kinds of shady, but as he gets to know the four men who’ve taken him on a wild ride, his developing feelings might become as dangerous as the elusive buyer.

But can a relationship with four such different men even work? Men who kill for a living? Men so full of contradictions?

Tank. The massive ex-soldier eager to be Clover’s Daddy.
Pyro. Wild, tattooed, with a filthy mouth and an itch for violence.
Boar. Ginger, bearded, a big teddy bear who can turn into a grizzly.
Drake. Dark and dangerous, with a tongue as sharp as his knives.

Can these men provide him with the love and security he craves? Or has Clover made the worst mistake of his life?

KeepsGettingBetter
4,0 van 5 sterren Some Details Were Lacking
27 mei 2019 - Gepubliceerd op Amazon.com
Geverifieerde aankoop
This book is presented as 'dark' and while there are elements like that to the story, they are balanced with moments that push the narrative into the territory of angst.

One strong example of this is when the character Boar has an odd freak out at Clover that causes issues (I'm being vague to keep spoilers to a minimum). We can infer why Clover would have the stated problems, but we are given little to no background on the mercenaries up to that point except in rushed blurbs to state why a grown man would act so childishly. In fact, we're only in those moments told how old Boar is as an excuse for his behavior. It would make most reasonable-minded people strongly dislike that character and any other character that went along with the proceeding events. Clover is young and his panicked, defensive actions make consistent sense, but these professional mercenaries make stupid mistakes and take the consequences of their bad decisions out on him to the point that it is just baffling.

My opinion on the genre:
Dark isn't pure horror, but it's not angst either. It is a sharp knife in the shadows. Tease the reader with it, and cut them when they drop their guard. Commit to the story to the hilt, and let the details bleed onto the pages.

All that said, I love reading books from this author. The intimate scenes here were crazy intense and I am looking forward to the next installment in the series.

L.D.
5,0 van 5 sterren An Instant Favorite
29 november 2019 - Gepubliceerd op Amazon.com
Geverifieerde aankoop
This was one of my favorite books of the year. I not only bought and read it on my Kindle, but also got the Audiobook version and listened to it a few months later after I first read it. As much as I love this book, it’s definitely not for everyone – there’s a poly relationship with D/s, kinks, and other BDSM elements. There’s human trafficking and all the horrors that come with that. The characters, although sexy and hot, are not good men. They’re not evil, but they have their own moral code which does not line up with most laws.

Like most K.A. Merikan books, there was a ton of hot, gritty sex scenes, and all of them felt unique (and steamy). Despite all the sex (the amazing, wonderful sex) there was a lot of plot and emotional character growth. The plot was spectacular and action-packed, and so well-written and well-done that I was thoroughly entertained. The emotional growth between the characters was beautiful. I loved how all the characters had to work to make the poly relationship work and there was no simple answer to making it work. All the characters had to put in work and build trust with each other. The emotional growth only made the sex scenes all that much hotter, as well. Plot, character development, and sex scenes all complimented each other very well.

Overall Rating: 5 Stars. The writing is gorgeous and exactly the quality and standard I have come to love and expect from the K.A. Merikan writing team.

The Audiobook was great. Wyatt Baker is a new narrator for me, but I enjoyed his narration and will definitely be listing to more books narrated by him.

Kindle Customer
3,0 van 5 sterren All right
17 december 2019 - Gepubliceerd op Amazon.com
Geverifieerde aankoop
Good book, I enjoyed the story and premise. Some of the sex scenes went a bit long, pages and pages long. I skipped through some of them to get back to the story. I like a bit of sex with my characters, but this was a bit much. I am also not really into the "daddy" sex thing. I liked the characters and relationship development. It was more natural, not Insta love. Each character is unique, has their own back story and at times dark past. I am interested in how this team and Clover continue to develop. Will read the next book.
Meer lezen
Vertaal recensie in het Nederlands

T. Fisher
4,0 van 5 sterren Enjoyable start to a new series
27 mei 2019 - Gepubliceerd op Amazon.com
Geverifieerde aankoop
The erotica jumped right in with both feet in this one. It was still a good read and I enjoyed watching the characters each grow together and individually. It takes a little while for them to all gel, but when they do, they are a force to be reckoned with. In the meantime, they are having a good time being naked together. I like how each pairing brings something unique and everyone's needs are being fulfilled. There are no real "good" guys here, they are all criminals, but they are not evil and that counts for something.
Meer lezen
Vertaal recensie in het Nederlands

Kindle Customer
4,0 van 5 sterren Good start
22 mei 2019 - Gepubliceerd op Amazon.com
Geverifieerde aankoop
I think this was a good start for this trilogy..... Clover was annoying tho... I hope in the next book he gets confidence in himself... I was so sick of him being scared and not really having a backbone !! Doubting himself at every turn... I will definitely be reading the next book....
Meer lezen
Een iemand vond dit nuttig
Vertaal recensie in het Nederlands
Ga naar Amazon.com om alle 52 recensies te bekijken 4,2 van 5 sterren
Terug naar boven
Over ons
Verkoop bij ons
We helpen je graag
© 1996-2020, Amazon.com, Inc. en dochterondernemingen