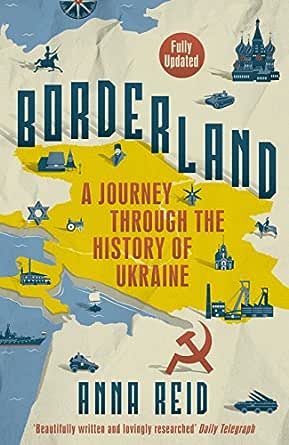 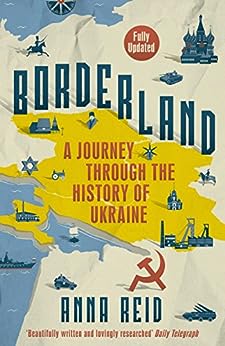 Borderland: A Journey Through the History of Ukraine (English Edition) Kindle-editie

A classic and vivid history of Ukraine, fully updated to cover the Euromaidan Revolution of 2014 and ongoing crisis in the Donbass.

Centre of the first great Slav civilisation in the tenth century, then divided between warring neighbours for a millennium, Ukraine finally won independence with the collapse of the Soviet Union. Tiring of their own corrupt governments, Ukrainians have since mounted two popular revolutions, taking to the streets to demand fair elections and closer ties to Europe. In the spring of 2014, Russia responded by invading Crimea and sponsoring a civil war in the Russian-speaking Donbass. Threatened by Moscow, misunderstood in the West, Ukraine hangs once more in the balance. Speaking to pro-democracy activists and pro-Russia militiamen, peasants and miners, survivors of Hitler's Holocaust and Stalin's famine, Anna Reid combines history and travel-writing to unpick the past and present of this bloody and complex borderland.

A classic and vivid history of the Ukraine, fully updated to cover the ongoing 2014 crisis
Alle bekijken
click to open popover

Bo
4,0 van 5 sterren Borderland: More a Journey than a History
30 juni 2017 - Gepubliceerd op Amazon.com
Geverifieerde aankoop
It is interesting that in my opinion the other Reviewer's view points are both to some extent equally correct- the book is interesting but superficial. I find the author overall presents an interesting and readable book. However, anecdotal stories can only take you so far for reasons that are obvious. If you happen to visit a certain place or speak to a certain person at a particular time, you will get one viewpoint and talk to someone else you may and probably will get a different story or outlook.. After all, that is human nature. Ask yourself how different a book about the United States would be depending on whether you "met" and spoke to a Upper East Side New Yorker, a rancher from Texas, a Latino from L.A. or an African American from Mississippi. I think the stories and impressions would be quite different- not wrong, but different. In the case of Anna Reid's book, my only objection is to the use of the term "History" in the title of the book (probably the editor's choice) because she truly writes about her journey through Ukraine and not its history. As such, her book is both informative and interesting but needs to be read and understood in that context.
Meer lezen
4 mensen vonden dit nuttig
Vertaal recensie in het Nederlands

Irma Gurman
4,0 van 5 sterren Visiting Ukraine
22 januari 2014 - Gepubliceerd op Amazon.com
Geverifieerde aankoop
My family and I wanted to prepare for an upcoming trip to the Ukraine and ordered this book because it was said to be an interesting combination of history and travel. The history is written very well and explains the complicated story of the Ukraine. From time to time, a site is mentioned briefly, but this book is not a travel book. However, it did pique our interest and as a result we have read many related articles.
Meer lezen
4 mensen vonden dit nuttig
Vertaal recensie in het Nederlands

William De Stefano
3,0 van 5 sterren For the general reader
26 maart 2015 - Gepubliceerd op Amazon.com
Geverifieerde aankoop
This book provides a decent overview, but was not as developed as I had expected, a bit too conversational and breezy, lacking necessary depth. Thus, the author leaves the geographical space of what constitutes "Ukraine" too vague. National boundaries are especially political here in this crossover region through which various ethnicities have passed, co-mingled and settled, but have too often lived in conflict, as is happening here now. That Ukraine is a Borderland is suggested by the title, but the book's discussion falls short conceptually. While readers will gain some understanding of the area's history, they will not be engaged to think about the more complex issues affecting this culturally rich but troubled country.
Meer lezen
9 mensen vonden dit nuttig
Vertaal recensie in het Nederlands