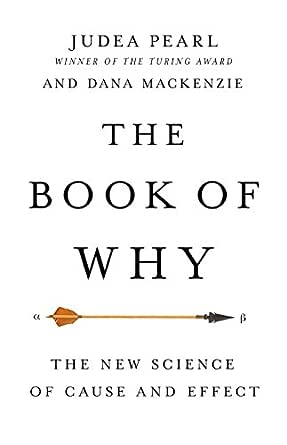 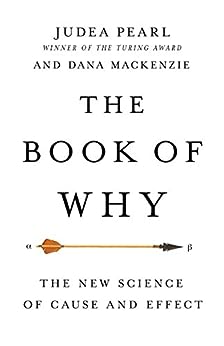 The Book of Why: The New Science of Cause and Effect (English Edition) 1st Edition, Kindle-editie

A Turing Award-winning computer scientist and statistician shows how understanding causality has revolutionized science and will revolutionize artificial intelligence
"Correlation is not causation." This mantra, chanted by scientists for more than a century, has led to a virtual prohibition on causal talk. Today, that taboo is dead. The causal revolution, instigated by Judea Pearl and his colleagues, has cut through a century of confusion and established causality--the study of cause and effect--on a firm scientific basis. His work explains how we can know easy things, like whether it was rain or a sprinkler that made a sidewalk wet; and how to answer hard questions, like whether a drug cured an illness. Pearl's work enables us to know not just whether one thing causes another: it lets us explore the world that is and the worlds that could have been. It shows us the essence of human thought and key to artificial intelligence. Anyone who wants to understand either needs The Book of Why.

Arguing that correlation does sometimes imply causation, despite the influence of the contrary idea across the developing scientific thought of the past, }The Book Of Why{ presents what causal thinking can reveal about the contemporary world, and how it can be understood as central to human and artificial intelligence
click to open popover

B. Crosby
1,0 van 5 sterren Is this a joke?
3 november 2018 - Gepubliceerd op Amazon.com
Geverifieerde aankoop
I hate to tell you this, but science, at least real science, has linked cause and effect. That's basically how science works. What this book is doing is trying to explain why the social "sciences" have yet to link cause and effect, and the simple answer is that the social "sciences" is not real science. The social world works by interweaving individual factors into social dynamics that create new emergent products. In science, you isolate variables to determine cause and effect. You can't do this with social systems. It's like trying to make sense of a sentence by separating each word and then each letter. The sentence only makes sense as a whole. This author is just trying to add more math and sciency formulas to the social sciences to make it look more scientific. I studied Economics. This is exactly what they do in Economics and have yet to prove anything or link any cause to effect, simply because economic systems are far too complex and can't be separated and isolated like a lab experiment. What the entire farce is doing is called obfuscation. If you are so confused by the math, technical jargon, sciency graphs and tables and data and figures, then you just feel dumb and agree with whatever idiotic conclusion the author invents. Look how cutting taxes and increasing federal spending stimulates the economy with all my sciency charts and formulas! It's an entire scam industry and this author is just like another grifter.
Meer lezen
150 mensen vonden dit nuttig
Vertaal recensie in het Nederlands

Aran Joseph Canes
5,0 van 5 sterren A Summary of a Lifetime of Scientific Work with Implications for all of Humanity
17 mei 2018 - Gepubliceerd op Amazon.com
Geverifieerde aankoop
The Book of Why is a popular introduction to Judea Pearl’s branch of causal inference. But it is also so much more.

Pearl has written many other textbooks introducing his graphical approach. But in this book, Pearl provides an engaging narrative of the history of causal inference, the important distinctions he sees in his branch and its importance for the future of Artificial Intelligence.

Briefly, Pearl views classical statistics as seriously flawed in not having developed a meaningful theory of causality. While able to demonstrate correlation, Pearl asserts that in classical statistics all relationships are two-way: that is 2x=3y+6 can also be written 3y=2x-6. We are left in doubt as to whether x causes y or y causes x.

Fundamentally, Pearl sees this problem as still plaguing all artificial intelligence and statistics. In its place, Pearl argues that the exact causal relationship between all variables should be explicitly symbolized in graphical form and only then can mathematical operations tease out the precise causal effect.

To be transparent, I am trained in the Rubin approach to causal inference and disagree with some of Pearl’s history and characterization of statistics. But that is not the point. The history is well-written, engaging and understandable by the lay reader. Similarly, his account of graphical causal inference theory is followable even for someone like myself who did not learn these techniques in graduate school.

The last part of the book, where Pearl opines on the future of AI, is the most sensational. Pearl believes that if computers were programmed to understand his symbolization of causal inference theory they would be empowered to realize counterfactuals and thus engage in moral decision making. Furthermore, since Pearl himself was a pioneer in deep learning, his characterization of contemporary AI as hopelessly doomed in the quest to replicate human cognition because of a lack of understanding in causal inference will be sure to garner attention.

But one would be misguided to think that speculations about AI or mischaracterizations of other kinds of causal inference make this book any less of a classic. For the first time, Pearl has written a popular, interesting and provocative book describing his branch of causal inference theory—past, present and future.

This book is a must read then, not only for causal inference theorists, but more widely for those with any interest in contemporary developments in computer science, statistics or Artificial Intelligence. A book that, like Kahneman’s Thinking Fast and Slow, is a triumphant summary of a lifetime of work in scientific topics that have ramifications, not only for fellow scientists, but for all of humanity.
Meer lezen
251 mensen vonden dit nuttig
Vertaal recensie in het Nederlands

Tomas J. Aragon
5,0 van 5 sterren Transforming the fields of public health, medicine, epidemiology, statistics, and computer science
27 mei 2018 - Gepubliceerd op Amazon.com
Geverifieerde aankoop
Wow! I am a physician epidemiologist with a doctorate in epidemiology and I teach computational epidemiology (with R) at UC Berkeley. I had the opportunity to study biostatistics from the best professors at UC Berkeley School of Public Health (Steve Selvin, Nicolas Jewell, Richard Brand, and many more). The field of causal inference was just beginning to take off with biostatisticians piloting the plane (Mark van der Laan, Nicolas Jewell, etc.). I avoided a rigorous study of causal inference but eventually came around after studying Bayesian networks for decision analysis (FYI: Pearl pioneered Bayesian networks). Judea Pearl's Bayesian networks and causal graphs connects the fields of statistics, epidemiology, decision and computer sciences in a profoundly elegant way. His work empowers and expands the potential of "big data." This is the first book written for the general public on this topic. It will have a **huge impact**. Causality and causal reasoning is at the core of everything we see, do, and imagine. He provides a graphical tool (causal graphs) for encoding expert knowledge (including community wisdom and experience). Anyone --- yes, anyone --- can learn the basics. For additional rigor, there are structural causal models (functional equations). I now consider it data science "malpractice" to design studies, analyze data, or adjust for confounders without using causal graphs. As he covers extensively in the history of causality, human brains are wired to resist new paradigms. Be intellectually wise and humble and read this book -- you will not regret it!
Meer lezen
153 mensen vonden dit nuttig
Vertaal recensie in het Nederlands

Integrity Reviews
5,0 van 5 sterren Useful and highly intelligent analysis of cause and effect
25 mei 2018 - Gepubliceerd op Amazon.com
Geverifieerde aankoop
This book represents the collaboration of Judea Pearl, a professional expert on causality, and Dana MacKenzie, an excellent science writer who is also a mathematician. It addresses the complicated differences between attempting to truly establish that A causes B versus erroneously asserting that A and B must be cause and effect because they correlate. The book is not a quick read. But the subject is of sufficient importance to merit the effort to digest its complex analyses. The section in the book treating the subject of climate change illustrates some of the challenges facing those seeking to truly understand what we know and don't know about this issue. Other examples are drawn from the field of medical research and other disciplines. A useful book written with great intelligence.
Meer lezen
39 mensen vonden dit nuttig
Vertaal recensie in het Nederlands
Ga naar Amazon.com om alle 106 recensies te bekijken 3,9 van 5 sterren
Terug naar boven
Over ons
Verkoop bij ons
We helpen je graag
© 1996-2020, Amazon.com, Inc. en dochterondernemingen