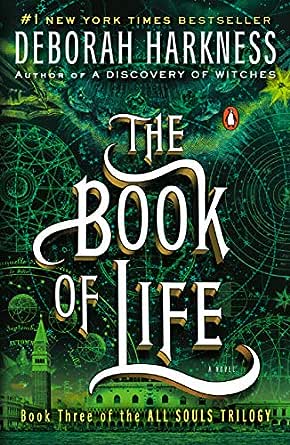 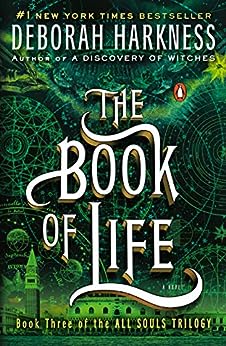 The Book of Life: A Novel (All Souls Trilogy, Book 3) Kindle-editie

"Weaving an extraordinarily rich story of magic and science, history and fiction, passion and power, secrets and truths, Harkness delivers an unforgettable and spellbinding finale that's not to be missed."
--USA Today "Juicy and action-packed."
--People "Pure escapist summer fun."
--Jodi Picoult, Parade "The epic and erudite vampire-witch romance comes to a thoroughly satisfying conclusion in the action-packed All Souls trilogy ender."
--Entertainment Weekly "A stirring, poignant saga."
--Us Weekly "The charm in Deborah Harkness's wildly successful All Souls trilogy lies not merely in the spells that its creature characters cast as they lurk pretty much in plain sight of humans, but in the adroit way Harkness has insinuated her world of demons, witches, and vampires into ours. . . . From the novel's poignant opening, Harkness casts her own indelible spell of enchantment, heartbreak, and resilience. . . . She is terrific at bringing her magic world to life, maintaining a fast-paced, page-turning narrative."--The Boston Globe "This trilogy is a superlative example in a subgenre you could call realistic fantasy--think Harry Potter but for grown-ups or Susanna Clarke's Jonathan Strange & Mr. Norrell. Witches, vampires, and daemons exist, along with time travel. But this world also is recognizably ours, not a wholly made-up setting like George R.R. Martin's Westeros. When done well, as it is here, this sort of fiction provides characters who are recognizably human in their desires and actions even if most of them are creatures with supernatural powers. Through them Harkness succeeds at the hardest part of writing fantasy: She makes this world so real that you believe it exists--or at the very least that you wish that it did."
--Miami Herald "Harkness has immersed and spellbound readers with her alternative universe. . . . Her ambitious melding of scientific and historical detail is inventive and brings surprising depth. . . . The Book of Life brims with sensuality, intrigue, violence and much-welcome humor."
--Los Angeles Times "Secrets and mysteries are finally revealed in the entertaining and satisfying conclusion. . . . The entire trilogy is a delightful plunge into the world of magic, witches and vampires, where love breaks all rules and happy endings are possible."
--Shelf Awareness "There is no shortage of action in this sprawling sequel, and nearly every chapter brings a wrinkle to the tale. The storytelling is lively and energetic, and Diana remains an appealing heroine even as her life becomes ever more extraordinary. A delightful wrap-up to the trilogy."
--Publishers Weekly "Harkness herself proves to be quite the alchemist as she combines elements of magic, history, romance, and science, transforming them into a compelling journey through time, space, and geography. By bridging the gaps between Harry Potter, Twilight, and Outlander fans, Harkness artfully appeals to a broad range of fantasy lovers."
--Booklist "The witch Diana's and the vampire Matthew's quests to discover their origins and confront the threats to their star-crossed union tie up as neatly as one of Diana's magical weaver's knots. . . . As in the previous two installments, there are healthy doses of action, colorful magic, angst-y romance and emotional epiphany, plus mansion-hopping across the globe, historical tidbits and name-dropping of famous artworks and manuscripts. . . . It's still satisfying to travel with these characters toward their more-than-well-earned happy ending."
--Kirkus Reviews "The adventure never lets up. . . . History, science, and the unpredictable actions of paranormal characters with hidden agendas all swirl together to create a not-to-be-missed finale to a stellar series."
--Library Journal

The #1 New York Times bestselling series finale and sequel to A Discovery of Witches and Shadow of Night.

Look for the hit TV series “A Discovery of Witches” airing Sundays on AMC and BBC America, and streaming on Sundance Now and Shudder.

After traveling through time in Shadow of Night, the second book in Deborah Harkness’s enchanting series, historian and witch Diana Bishop and vampire scientist Matthew Clairmont return to the present to face new crises and old enemies. At Matthew’s ancestral home at Sept-Tours, they reunite with the cast of characters from A Discovery of Witches—with one significant exception. But the real threat to their future has yet to be revealed, and when it is, the search for Ashmole 782 and its missing pages takes on even more urgency. In the trilogy’s final volume, Harkness deepens her themes of power and passion, family and caring, past deeds and their present consequences. In ancestral homes and university laboratories, using ancient knowledge and modern science, from the hills of the Auvergne to the palaces of Venice and beyond, the couple at last learn what the witches discovered so many centuries ago.

With more than one million copies sold in the United States and appearing in thirty-eight foreign editions, A Discovery of Witches and Shadow of Night have landed on all of the major bestseller lists and garnered rave reviews from countless publications. Eagerly awaited by Harkness’s legion of fans, The Book of Life brings this superbly written series to a deeply satisfying close.

Sheila M
4,0 van 5 sterren Satisfying Conclusion to the Trilogy
29 december 2017 - Gepubliceerd op Amazon.com
Geverifieerde aankoop
FINAL DECISION: Satisfying end to the trilogy which wraps up all the storylines (some more satisfyingly than others) and gives a happy ending.

THE STORY: Having returned from the past, witch and historian Diana Bishop and vampire scientist Matthew Clairmont have to face both new and old dangers as they try to discover the importance of the Book of Life. Their lives and the lives of their unborn children are at stake as Diana and Matthew have to face old enemies and rely on old friends.

OPINION: I enjoyed this ending to the trilogy and Diana and Matthew's story even when I didn't necessarily like all the answers. The book suffers somewhat from expectations which were built over two very long and detailed books. Perhaps the answers could never truly satisfy the expectations, but I loved seeing how these two characters grew and changed and made a family for themselves.

THE BOOK OF LIFE finally answers the question that began in the first book: what is the Book of Life and its connection to Diana. In this book, the entirety of what Diana and Matthew have been building in the prior two book finally come to fruition. This story is is one about tolerance and building a family and being open to change.

I enjoyed the progression of the relationship between Diana and Matthew and how both of them accept and love all the parts of one another. There are few easy answers in this book which was good.

I certainly enjoyed seeing many of the characters in the series come together in the solution. The book ends with peace and joy and hope in the future.

WORTH MENTIONING: This book returns to the interesting combination of magic and science that was the hallmark of the first book in the series.

CONNECTED BOOKS: THE BOOK OF LIFE is the final book in the All Souls Trilogy. This book is meant to be read as part of the trilogy.

STAR RATING: I give this book 4 stars.

NYerDownUnder
4,0 van 5 sterren An entertaining read, even if there are some annoying flaws
26 maart 2018 - Gepubliceerd op Amazon.com
Geverifieerde aankoop
Entertaining read. I did not mind the detail; I enjoyed being able to fully immerse myself in the world. And the story was exciting, and relatively well written. Those are the good points. Here are the bad. First, even in the third book, I just could not feel the romance between Diana and Matthew. At all. We kept being told they are the parties to a great romance, but I cannot feel it. If you are going to write a romance, making us feel the romantic tension is Romance 101. As a romance, this book is disappointing. Also, as in previous books, part were quite derivative from Twilight, albeit a much more sophisticated and better written Twilight. This includes having the ruling council be based in Italy, and making one of the main sources of tension be the showdown between the "good" vampire family and the ruling council, although here there is the twist that the de Clermonts have a seat on the council. The ending also, while wrapping up some loose ends, still left some basic questions unanswered. I will go into those in the next paragraph.

SPOILER WARNING. DO NOT READ FURTHER IF YOU HAVE NOT YET READ THE BOOKS.

For example, after two books of buildup about how Diana helped Philippe while he was being tortured by the Nazis, they never show her go visit him, and just give some flippant excuse that "it must have happened, since he remembers it"? Indeed, if Diana can time travel, why not go back and save Philippe, Emily, her parents, etc? Also, what does the book of life say? Who wrote the book? How were the creature skins collected, etc? Is Diana always going to have a tree growing out of her neck? How will she be able to teach when she has letters and numbers in her eyes? Also, as an academic myself, I find it unbelievable that she can disappear for 1 year+ with nothing other than a quick letter, having filled out no other HR paperwork and having no discussion with her dean about who is covering her teaching load, yet still have a job to return to?
Meer lezen
30 mensen vonden dit nuttig
Vertaal recensie in het Nederlands

nmhicks
2,0 van 5 sterren Worst of the three by far
9 oktober 2018 - Gepubliceerd op Amazon.com
Geverifieerde aankoop
This book needs a good editor. There were big stretches that were boring. There was a rape and torture plot point right in the middle of the book. But instead of engaging with it, the characters kind of just went back to their drippy banter. "We just saw a women being tortured. Now let's go make a new pot of coffee." It was gross. It was all so badly written, and the story structure was garbage. Genuinely, treating assaults like it's a plot point is so nauseating. It's one thing if there are actual emotional consequences for the characters. But in this book it was literally like a throw away, to show you how bad the main villain was. And you know what, it wasn't effective. I know the author has sold a lot of books, but the editor needs to step in at a certain point and say this is bad.
Meer lezen
26 mensen vonden dit nuttig
Vertaal recensie in het Nederlands
Ga naar Amazon.com om alle 5.426 recensies te bekijken 4,7 van 5 sterren
Terug naar boven
Over ons
Verkoop bij ons
We helpen je graag
© 1996-2020, Amazon.com, Inc. en dochterondernemingen