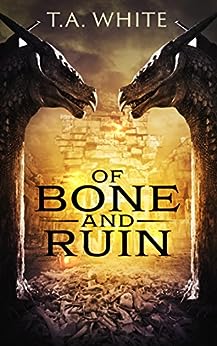 An ancient discovery has been made close to the city of Aurelia—one that promises wealth and power equal only to the dangerous secrets lying at its heart.

With three powerful groups vying for control of the discovery’s unlimited potential, it will take a delicate touch not to tip the scales toward war. Something Tate Fisher, a newly accepted dragon-ridden with a bit of a memory problem, has never been known for possessing.

Tate must learn to navigate the undercurrents of this society if she wants her friends and empire to come out the other side in one piece. Because these secrets involve Tate, and they don’t intend to let her go so easily.

Amazon Customer
5,0 van 5 sterren Love this book
20 juni 2017 - Gepubliceerd op Amazon.com
Geverifieerde aankoop
As someone who has been reading science fiction and fantasy for 15 years, I am well over the 16-year old angsty stories that are so popular in the genre today. This story was perfect, I really like Tate and her adventures and where the storyline is going. This picks up a couple of months after the Dragon Ridden story and although Tate's lack of knowledge about her past is annoying, I love the story telling enough to be patient and have the secret of her past unfold. I was kinda surprised when she said she *spoiler* had never thought about being a Savior, because that is exactly what I have thought she was since the flashbacks from the first book, but ehh again the journey is so good that I can deal with the elusiveness of all the knowledge. Loved it and am looking forward to the next book!
Meer lezen
5 mensen vonden dit nuttig
Vertaal recensie in het Nederlands

Infinity Book Love
4,0 van 5 sterren What's Happening
7 juni 2017 - Gepubliceerd op Amazon.com
Geverifieerde aankoop
Of bone and Ruin, I was not as grand as the first book. Now don't good me wrong still an awesome read. It just seemed to move a lot more slower than the first. And Tate, oh my lovely Tate it seems she's either growing up or getting put on a leash. She didn't get herself in as many funny problems as the first.
What I liked, the mystery surrounding the Creatures and Saviors. What is going on there?  I still can't quiet figured it out and the suspense is killing me. Rhy wow. I say his dragon and him are slowly staking claim on Tate. Not much actions between the two but when they are interacting together it shows  of something possessive. Love alpha males.
I really can't say there was anything I didn't like about the book. It was a really good read and everything but it just didn't have me laughing or going 'oh crap' I like first.
I would definitely recommend it to others who love Fantasy, Strong Heroins,  Adventure and Sci-Fi.  It's a little on the Sci-Fi side.

M.E.B.
5,0 van 5 sterren This Series is a Winner!
23 juli 2017 - Gepubliceerd op Amazon.com
Geverifieerde aankoop
Wow! The first book in this series was good, but I couldn't rate it as high because I found the editing issues distracting. However, this book was very readable, and that let the story-line shine. I started last night and finally put it down when I couldn't keep my eyes open any longer--today, I was disappointed to finish it--I wanted the story to keep going on!

I really love this series, because although there's a hint of potential romance, the story isn't what I'd call a romance. It's Fantasy, with a kick-ass lead who is "dragon-ridden". I loved finding out more about Tate, her history, her dragon Ilith, Tate's abilities and her potential, while being entertained with an amazing relationship between Dewdrop, a young sidekick (who's more world-wise than Tate), and her "bearcat" friend Night (and his offspring)--this time as they explore a find of artifacts that all the groups in Aurelia are fighting over. (Of course, the plot's much more than this!)

It's going to be really hard to wait for the next in the series to come out, but in the meantime, I'll go back and re-read the Aileen Traver's series, which I really liked as well - Midnight's Messenger and Midnight's Emissary.

Mello Ichimaru
5,0 van 5 sterren More Discoveries
19 juni 2019 - Gepubliceerd op Amazon.com
Geverifieerde aankoop
Tate has a knack for getting herself in bizarre circumstances. Once again performing an "easy" job for Ryu, Tate gets dragged into a situation that is much more than what it seems. She even gets involved with various political factions. Then some crazy shows up and tries to use her again and nearly kills her.

We also get more of Tate's past. Some of it, I had guessed from book one, though Tate seems skeptical about it. I wonder how long until someone else finds out.

Also, I loved how protective Ryu is of Tate at times. His Dragon seems to be just as attached to Illith as well. I also !over seeing so much of Jost. I love Jost.
Meer lezen
Vertaal recensie in het Nederlands