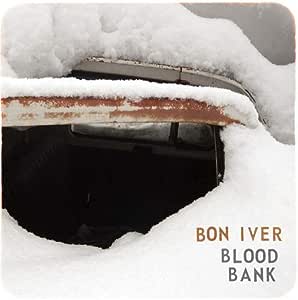 This four-song collection continues down the path forged by 2008's critically acclaimed "For Emma, Forever Ago". Bon Iver's snow-blanketed harmonies live across the seasons. As much as "Emma" is about the cold, "Blood Bank" is about the warmth that gets you through it. Both expansive and intimate, these songs explore the darker and lighter natures of the seasons and what they signify, and offer a glimpse into the natural energy and refined craftsmanship that characterize Justin Vernon's music.

It’s immediately apparent that this vinyl was not mastered perfectly, and even worse there are all sorts of imperfections throughout both sides of the record. These may be due to poor care, as the vinyl came quite filthy.

I’d recommend this as a collectors item, but not a premium listening experience.

Adam
5,0 van 5 sterren A Reach Into the Future and an Appreciation for the Path Taken
19 maart 2009 - Gepubliceerd op Amazon.com
Geverifieerde aankoop
Bon Iver's For Emma, Forever Ago was one of 2008's biggest critical darlings. On that album, Mr. Vernon kept things at their absolute most basic. He recorded in solitude on what he described as "a very light set-up" with the intent of distributing the recordings as demos to be shopped to the labels. In the end, he created a timeless piece that was driven by simplicity and emotion.

Often a fear for both artists and labels is the sophomore effort. Will the fans be as receptive? Does the artist have another glittering prize in their pocket? It's called the sophmore slump for a reason. Fortunately, Bon Iver's Blood Bath EP picks up where For Emma, Forever Ago left off and takes small paddles into a bigger sea.

"Blood Bank" (4:45)
It sounds like a track that could have easily been on For Emma but with a bit more polish. Don't fear, is still simple and beautiful. It's just slightly cleaner in sound. Vernon also drags out his "Iiiiiiiiiiiiii...know it well" to the point of striking a Coldplay pose. Don't let it deter you, Vernon has a lovely voice and the softness of these lines underscore a great song.

"Beach Baby" (2:40)
This is a short song starting with just Vernon and his acoustic guitar. He quickly paints the picture of lost love's despair and even borders on sarcasm. The first line says it all with "When you're out, tell your lucky one...to know that you'll leave." After his brief acoustic reflection, the song closes with a haunting slide guitar.

"Babys" (4:43)
"Babys" is broken into thirds. The first 1:25 of this song is repetitive piano chords that evoke mental imagery of a snowfall and sounds like a cross between a George Winston track and Animal Collective's "My Girls". At the 1:25 mark, Vernon chips in his vocals and the song fully develops for about two minutes before closing the last 1:30 with the same piano chords and Vernon chanting repetitively about making babies - "Summer comes, to multiply. To multiply!"

"Woods" (4:45)
An absolutely gorgeous song that is just layered vocals and vocoder. The lyrics are simple but one gets the impression that the meaning is deep. He's "up in the woods...slowing down the time". Maybe he's savoring his successes. Maybe he's just trying to live as fully as possible in the fleeting moments of life. Either way, this is a stunner that borders on soul music in both emotion and sound.

I read comments by another critic that Bon Iver is "one-dimensional". I took that to mean that he has one sound and in time he'll become repetitive. While I could see that as a possibility if Vernon rested on his laurels and recorded 5 consecutive For Emma's, I found the last two tracks on Blood Bank to be experimental and a sign of what's to come. And I must say, I couldn't be happier about it. Blood Bank is an EP that avoids the sophomore slump by reaching *just a bit* out into the darkness of what Bon Iver may be on future albums while using the first two tracks to appreciate the path taken to get here.
Meer lezen
16 mensen vonden dit nuttig
Vertaal recensie in het Nederlands

Sarah Thomas
5,0 van 5 sterren (Updated) Poor cut
19 januari 2018 - Gepubliceerd op Amazon.com
Geverifieerde aankoop
I'm very confused as to how I got an album with a mounting hole smaller than my Audio Technica record player and a vintage one. I even looked up the lowest rating reviews and it doesn't seem like many other people had this problem. Unfortunately it's unplayable because it doesn't mount.

I returned the defective one and took a chance in ordering it again and luckily it came in perfect condition.
Meer lezen
Vertaal recensie in het Nederlands

DEWIT
5,0 van 5 sterren Stunning Musical Experience
24 januari 2010 - Gepubliceerd op Amazon.com
Geverifieerde aankoop
This is original and fabulous. A sound designer, enraptured with the quality of the mix, gave it to me, and I have bought two since then for gifts. My husband and I listen to it most days, and do not get tired of it, because it has such richness and depth. It's an amazing experience with headphones, but is also pleasant to play during dinner or conversation, because it can be enjoyed on levels. The hooks are catchy enough to give you an instant buy into the sound, but they aren't obnoxious or overbearing over time. This is my favorite new music this year.
Meer lezen
Een iemand vond dit nuttig
Vertaal recensie in het Nederlands